Since 1929, the Maryland Horse Breeders Association (MHBA) has been the leading horse industry advocate within the state of Maryland.

The MHBA functions as an informational resource for horse breeders and owners, the media, community and governmental organizations, and the general public.

As a service organization, the MHBA provides industry information, educational opportunities and legislative representation to its nearly 500 breeder-owner members, which include Thoroughbred breeders, owners of racehorses, steeplechase and hunt enthusiasts, and others with horse involvement.

The main purposes of the MHBA have always been to encourage, promote, protect and improve the horse breeding industry in Maryland. While emphasis traditionally has been placed on the production of Thoroughbred race horses, the MHBA encourages all sports relating to the use of horses.

Marylanders have been breeding and racing Thoroughbred horses for more than 250 years. From the famed 18th century race mare and producer Selima (by the Thoroughbred foundation sire the Godolphin Barb) to such 20th century champions as Gallant Fox, Omaha, Native Dancer, Nashua, Kelso, Ruffian and Spectacular Bid, Maryland-owned Thoroughbreds have been providing both excitement and profits for Free Staters.

Maryland is birthplace of two-time Horses of the Year Challedon and Cigar, the latter the leading all-time North American earner when he retired 1996, as well as multimillionaires Awad, Concern, Broad Brush, Richard's Kid and Safely Kept. The dams of two of the most most influential sires of modern times were born in the state: Miss Disco, dam of Bold Ruler, and Geisha, dam of Native Dancer—both were daughters of Maryland sire Discovery. In addition, the great Northern Dancer stood most of his remarkable stud career in Chesapeake City.

While Maryland’s Subscription Plate was run as early as 1721, organized Thoroughbred racing began with the establishment of the Maryland Jockey Club at Annapolis in 1743. Following the Civil War, this association built Pimlico race course in Baltimore, which opened in 1870 and still operates as America’s second-oldest track.

Today Maryland boasts spring racing at Pimlico, home of the Preakness Stakes (the second jewel in racing’s Triple Crown), and fall and winter racing at beautiful Laurel Park, home to several major stakes races each year, including the Frank J. De Francis Dash and Barbara Fritchie and General George Handicaps. Each summer there are eight days of Thoroughbred racing at the Maryland State Fair at Timonium.

Since 1936, the Maryland Horse Breeders Association has utilized publications as a means of promoting the horse industry and encouraging horse breeding and participation in horse sports. For many years, the MHBA published the award-winning monthly magazine, The Maryland Horse, which is now a monthly newsletter for members of the association.

In addition, the MHBA produces various posters, brochures and guides that educate the public about racing and breeding in Maryland, provides on-line databases of Thoroughbred farms and services and maintains an on-line Thoroughbred stallion roster.

The MHBA also maintains an extensive equine library. This library, with its collections of books, periodicals and videos, is open to MHBA members and to the general public. Currently, as the association awaits construction of the new Maryland Equine Education Center at Goucher College in Towson, only part of the library is available at our temporary quarters located on the Goucher College campus.

In 1988, the Maryland Horse Breeders Association chartered the Maryland Horse Industry Foundation to serve various educational and charitable needs of the Maryland horse industry. Foundation projects include maintenance and expansion of the MHBA library, assistance to substance abuse programs for farm employees, support for scientific and veterinary research, and special grants for a variety of related causes. The Foundation is nonprofit and tax-exempt under Section 501(c) (3) of the Internal Revenue Code, so that contributions and gifts are fully tax-deductible to the extent allowed by law.

In addition, the MHBA has played a key role in the development of the Maryland Horse Council, established in 1984 to serve the common interests of all horse organizations in Maryland. The MHBA continues to be an active member of the MHC and provide support for its various activities. 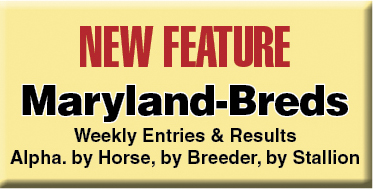 Explore the history of the MHBA