“The formation of an organization, in whole or in part of persons, firms
and/or corporations, who have been or are at the present, or who likely will be interested in the breeding and improvement of horses; the fostering and preserving of traditions pertaining to the horse everywhere and particularly the fine traditions of the horse in Maryland. . .”
—From the Articles of Incorporation, Jan. 12, 1929

The Maryland Horse Breeders Association was incorporated 90 years ago this month, becoming the first organization of its kind in the country. While promoting all breeds, the MHBA drew the core of its support from the Thoroughbred industry.
The founders “forged an association intended to encourage the utilization of horses for sport and recreation and to protect the means of production that made Maryland the most enduring steward of our national equine heritage,” noted the late Tim Capps, former executive vice-president of the MHBA.
Over the next 12 months the Maryland Horse will take a look at the association’s history from the past nine decades. This month is a reprint, in part, from the MHBA’s 75th anniversary publication by former MHBA president Josh Pons’ on the creation and early days of the MHBA.
Visionaries united by love of the horse
Now, as then, it’s all about ideas, from a body of men and women serving as board members of the Maryland Horse Breeders Association –
the first, the oldest, such organization in the country.
Then was 1929. The verdant hills and valleys of Maryland grew horsemen like grass. Grandsons of Civil War cavalrymen, captains of commerce, transplanted Long Islanders in unspoiled country, courtly politicians, daring steeplechase riders. Beautiful Maryland attracted the allegiance of such men, who shared in common a love of the horse, whether a flat racer at Pimlico, a Hunt Cup warrior, or a Sunday-safe riding horse. In the agrarian society of the late 1920s, these men all thought it a good idea to pool their talents into a team. 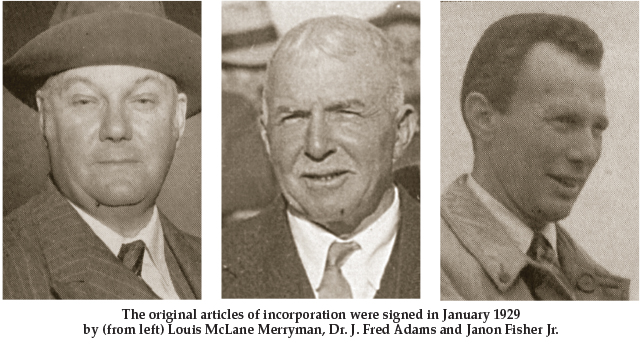 At his desk, Louis McLane Merryman examined the original Articles of Incorporation drafted for the Maryland Horse Breeders Association. He put his chin in his hands, covering his muttonchop sideburns, and was lost in thought.

Yes, to further all things to do with horses – ponies, race horses, draft horses – a broad purpose for our association. I’ll sign that.
Dr. J. Fred Adams thought about his stable of race horses, of crisp spring mornings at state tracks such as Havre de Grace, the sun banking off the Chesapeake Bay as horses worked in the breaking day.
It’s time to band together to serve as stewards for this exciting pastime. Think what we’ll accomplish if we work together. Where do I sign?
Janon Fisher Jr. had horses to ride.
Helluva good idea. He signed.
The Maryland Horse Breeders Association became a legal entity on the signatures of these three men. Their first order of business? Elect a president. Breckinridge Long stood tall among the horsemen. Assistant Secretary of State during World War I. Gracious owner of the Monticello estate between the towns of Bowie and Laurel. Urbane. A born leader. First president of the MHBA.
He surrounded himself with talented board members.
H.G. “Hard Guy” Bedwell, trainer of Sir Barton, the first Triple Crown winner (1919); Major Goss L. Stryker, a veteran of the Spanish-American War and Harford County farm owner; Sylvester W. Labrot Sr., owner of Holly Beach Farm near Annapolis; Edwin Warfield, the son of a Maryland governor; Howard Bruce, Baltimore banker and owner of famed jumper Billy Barton. The starter’s flag dropped, and the MHBA was off and running.
A half-dozen years passed, and in 1936, Labrot’s farm manager, Humphrey S. Finney, was elected to the board. Author of A Stud Farm Diary, a day-to-day account of life on Labrot’s farm serialized by The Blood-Horse in 1935 and ’36, Finney had an idea he put before the board: Why don’t we do a monthly newsletter?
Splendid idea, Finney. Head it up.
Finney pulled some newsworthy items from his desk drawer, his “saddlebag” as he called it, and the periodical Maryland Horse was born, weighing in at four pages at birth. Finney’s idea would grow in time to be the standard against which all other state breeders’ magazines would be measured. Finney became field secretary for the MHBA and editor of the magazine. The “office” was a second floor bedroom in Finney’s Towson home.