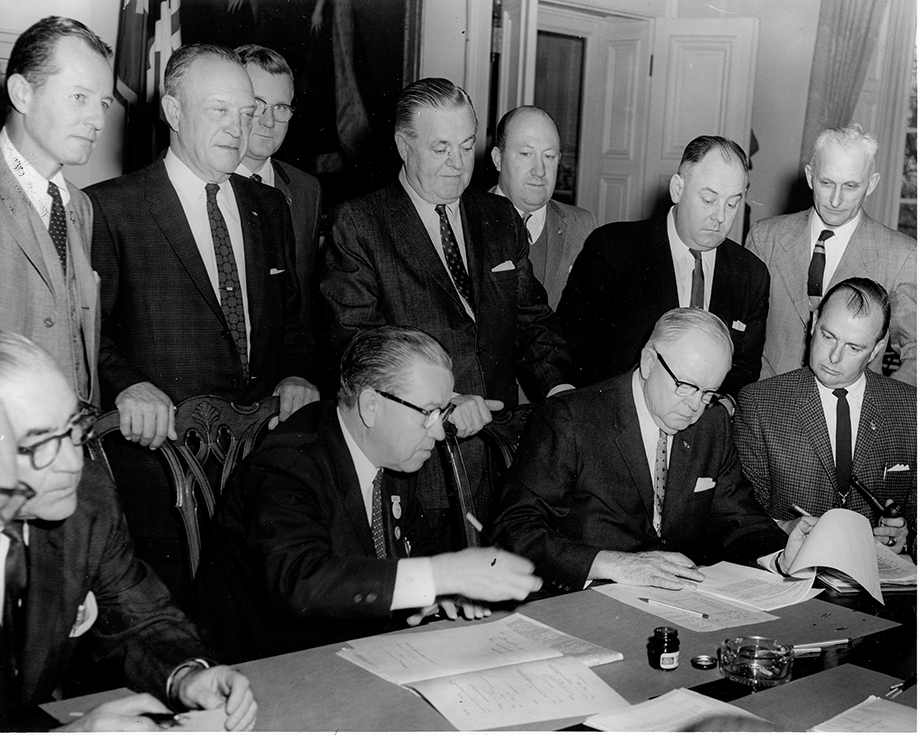 Snowden Carter, then editor of the Maryland Horse, was witness to what he wrote “was the biggest news ever to come to Maryland breeders.” A year after the bill’s signing, Carter reflected: “Mary­land­ers aren’t accustomed to being the leaders in a national trend, but there can be no doubt that other states are now attempting to duplicate the legislation which was passed in Annapolis. . .
“Expansion of the state’s breeding industry is inevitable. The quality of racing at Maryland tracks has improved and will continue to improve.”
Carter added that the bill, “has revitalized a struggling, if not moribund, industry.”
The first state breeder incentive development program in the country, the Maryland Fund was a joint lobbying effort sug­gested to the legislature by the Maryland Horse Breeders Association and the Horsemen’s Benevolent and Protective Association as a way to promote and improve the state’s breeding industry and to help supply runners to Maryland tracks.
The bill raised the pari-mutuel take at all Maryland tracks from 12 to 13 percent, with the additional 1 percent going entirely to horsemen in the form of purse money and breeder bonuses. Two-thirds of the 1 percent was to go into general purse distribution, and one-third was designated for the newly created Maryland-bred fund, which would be governed by the Maryland Racing Com­mis­sion.
The results were immed­iate.
The first Maryland-bred foal crop (1964) conceived after the signing of the bill jumped 86 percent over 1960, to 877 foals. One year later, the foal crop surpassed 1,000 for the first time in Maryland history (a 119 percent increase in a five-year span). Maryland went to fourth in the nation by number of foals born in the state (behind Kentucky, California and Florida).
Prior to the start of the 1962 breeding season, 98 stallions were on Maryland’s roster. By 1970, the roster contained 190 listings, and included the likes of Northern Dancer, Nearctic, Sunrise Flight, Maribeau, Knightly Manner and Kauai King. The latter, a foal of 1963, was the first Maryland-bred winner of the Kentucky Derby. His breeder, Virginia horseman Dr. Frank A. O’Keefe, had decided to foal at least one mare in Maryland every year after the bill passed.
By July 1962, the half-mile track Bel Air offered the first Maryland Fund race. The winner, Leddysmaun (by Country Life Farm stallion Saggy), ran for a purse of $5,000, earned breeders William Sims and his father George a $475 breeder bonus, and Stanley Sagner, owner of Saggy, received a $237.50 stallion bonus.
In 1970, the fund received another boost, as the takeout increased from 13 to 15 percent, and the percentage of handle allocated also rose. Then in 1985, Gov. Harry Hughes reduced the state’s share of the mutuel handle from 4.09 percent to 0.5 percent, and the Maryland Fund’s share of the handle increased to 1.1 percent. In 1965, more than $1.04 million in Maryland-bred awards and purses were paid out; the figure rose to more than $1.7 million in 1971; by 1975, it was nearly $2.6 million. Throughout the 1980s, more than $3 million a year was earmarked for Maryland-breds through the program.
Incentives for Maryland breeders were instituted by the MHBA decades before the creation of the Maryland Fund. Local tracks offered races restricted to Maryland foaled runners, and the MHBA oversaw registration which determined eligibility, keeping records of state-bred foals. A notice was printed in the August 1937 issue of Maryland Horse: “A score of Maryland-bred winners are not yet registered with the Maryland Horse Breeders Association. Let their breeders, who are after all the gainers, remember that they cannot race in any race for Maryland-bred horses unless so registered.”
By March 1941, the Mary­land Racing Com­mis­sion accorded the MHBA complete authority in determining Maryland-bred eligibility. A number of races were restricted to Maryland-bred AND sired, including certain stakes such as the Maryland Futurity. In 1947, the Mary­land Breeders’ Stakes Series, a forerunner to the Maryland Fund stakes program, was launched. Four restricted stakes, one run at each of Maryland’s major tracks (Pimlico, Laurel, Havre de Grace and Bowie) were offered, with the MHBA handling the nominations, and collecting a $10 sub­scription fee. It was noted that entry of a yearling in the stakes series didn’t auto­matically register the horse as a Maryland-bred, which was still required in order for the horse to be permitted to run in any Maryland-bred race. The stakes schedule was expanded to five in 1958 with the addition of the Maryland Derby at Laurel.
Changes have continued to be made to the Maryland Fund program over the decades. The owner award program was created in 1982, replacing races restricted to Maryland-bred runners that had begun in 1962. Owner bonuses continue to be paid out, since February 2015 from the purse account, and in 2018 amounted to nearly $3.5 million. Total fund payments in 2018 exceeded $9.5 million (which includes the owner awards from the purse account). R