Traditionally, the event offers breeders an opportunity to show off their Maryland-bred yearlings while making them eligible for lucrative prizes.
Participants, both human and equine, have been a who’s who of the racing world, with a long list of esteemed horsemen having served as judge and numerous state-bred stars seizing the opportunity for their first public appearance.

Maryland’s first state-bred yearling show, held on a Thursday (May 12, 1932), was a superbly attended affair under less than ideal conditions. A crowd of approximately 500 people turned out at Pimlico two days before the Preakness, “braving cold weather, rain and mud,” according to an account in The Blood-Horse.
A large assemblage of about 60 yearlings was judged in two divisions – one for colts and one for fillies – their owners obviously enticed by the prize money. A total of $900 was divided among the top four finishers in each class, with $500 going to the blue ribbon winners.
Three of the era’s most notable horsemen – Admiral Cary T. Grayson, William duPont Jr. and Preston M. Burch – judged the entrants in the track’s paddock, which helped shelter participants from the driving rain.
Reported The Blood-Horse, “In the colt division first prize and championship of the show was awarded to a black son of Sun Flag from Unfurled, by Pennant, the property of J.W.Y. (Bill) Martin, wealthy young Worthington Valley horseman, sportsman and polo player.” The filly division was won by a chestnut daughter of Constitution owned by Janon Fisher Jr.
That first show set a prece­dent, as 26 Hall of Fame trainers have served as judges.  Preston Burch, who also judged the show in 1946 and 1953, was inducted into the Hall of Fame in 1963.
For the 1933 show, which offered a total of $1,000 in prize money (divided between the two classes), it was noted that “An excellent judge of young Thoroughbreds, James E. [Sunny Jim] Fitzsimmons, trainer of the Belair Stud, Wheatley Stable and other horses, has accepted an invitation to judge the show.” 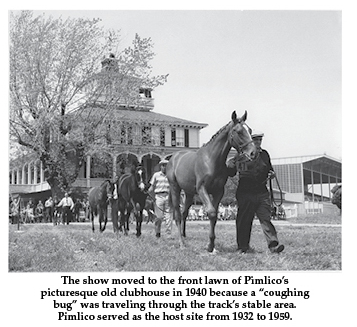 Fitzsimmons, who saddled Belair Stud’s Gallant Fox to win the Triple Crown in 1930, had a 70-year career that was marked by such other milestones as winning the 1935 Triple Crown with Belair’s Omaha, training two of the world’s leading money-winners (Gallant Fox and Nashua), and orchestrating the careers of eight champions, five of whom are in the Hall of Fame (the three above, plus Granville and Bold Ruler).
He lent his expertise as MHBA Yearling Show judge for 10 straight years. Fitzsimmons’s first tour of duty took him into Pimlico’s infield, on the Monday after that year’s Preakness. Maryland Horse Breeders Association field secretary Humphrey S. Finney reported that Fitzsimmons “was not told the breeding of any of the entries, but was asked to place them as he would were he selecting yearlings for racing at Saratoga.”
A total of 34 yearlings was shown, and Finney remarked, “The turnout of spectators was disappointing in numbers, but the improvement in condition of the yearlings exhibited was very marked.” J.W.Y. Martin bred and owned both class winners.
The show was open to any state-bred yearling, regardless of where the sire stood, and in its third year, great pride was taken that both the class winners were by Maryland stallions (Flying Ebony, the 1925 Kentucky Derby winner who stood his first Maryland season in 1932, and *Sir Greysteel), winning over the get of such sires as *Sir Gallahad III, Gallant Fox and *Sun Briar.
Five years later, the show for state-breds “witnessed two innovations.” First, it was limited to the produce of mares covered in Maryland. And second, the colts and fillies were judged at the same time, in two different rings (Fitzsimmons had the colts – 30 were exhibited; Harry Rites judged 22 fillies). The Maryland Horse noted: “The latter innovation proved bad judgment, and next year only one ring will be judged at a time.”The restrictions to Maryland-sired only yearlings ended in 1946, the first show after a three-year hiatus during World War II. Two classes were added for out-of-state-sired yearlings (one for colts and one for fillies). 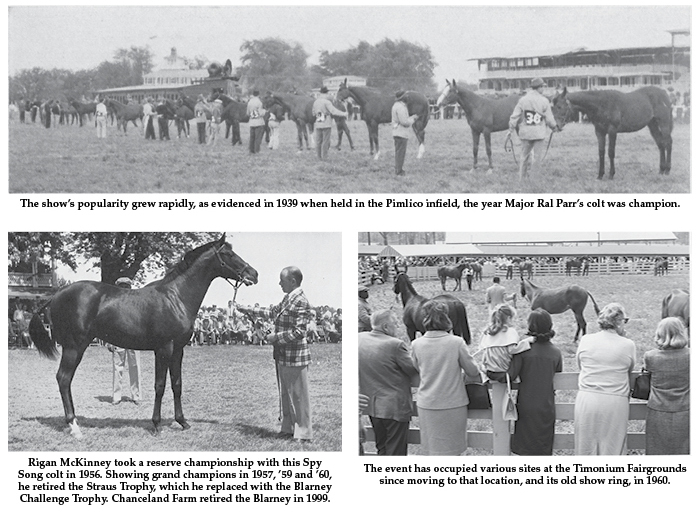 A far more lasting innovation brought about in 1939 was the Back Again purse – a race restricted to 2-year-olds who had been shown the year before.
The inaugural running of the Back Again, featuring a purse of $1,500, took place on May 11 at Pimlico, with G. Ray Bryson’s first-time starter Knightfors winning by two lengths. “In all only nine starters were carded, though there were 43 that had been eligible . . . Thus is shown the sorrows of training. Bucked shins and coughs kept many out of the race,” reported The Maryland Horse.
The Back Again completed its run 44 years later, with Glennie Martin’s 1-2 favorite Fancy Century taking home the winner’s share of the $12,000 purse. The final Back Again drew considerable interest, and had an also-eligible list. A dozen runners contested the six-furlong race.
The victory was especially meaningful to Glennie Martin’s husband, J.W.Y. (Duck) Martin Jr.: “My father had the champion of the very first show. . . so it seems fitting that our family should also own the winner of the final running of the Back Again.”
That running notwithstanding, the Back Again was terminated because it generally attracted small, mediocre fields that did not accurately measure the ability of the show participants. In its place, the MHBA established a $20,000 Maryland Fund Award to be divided among the exhibitors of the four contestants who earned the most money on the race track the next year.
The first purse premium, worth $13,000 to the leading earner, was awarded in 1984 to Sarah Jane Kousouris, exhibitor of For You and Me. The For Love and Glory filly earned only $18,490 as a 2-year-old, but it was good enough for the top spot. She proved her quality when going on to win three stakes and a total of $161,094 during her four-year career.
Over the years, the first-place purse premium has gone to a number of stakes-winning juveniles, including Dark Hollow Farm’s Safely Kept and Ready’s Image; Frank Zureick and Violet Cleveland’s Urbane; Hal C.B. Clagett’s Run Alden and Bullet Valay; ZWP Stable’s Cherokee’s Boy; and Robert Manfuso’s Cathryn Sophia, who the following year at 3 recorded the most earnings in a single season for any purse premium award winner to date, with $1,139,720 the year she won Kentucky Oaks-G1.
The top-earning yearling show participant at 2 has been Spring Meadow Farm’s Declan’s Moon. Shown in 2003 when trainer Barclay Tagg selected him as a class winner, the gelded son of Malibu Moon earned $507,300 during his Eclipse Award-winning campaign in 2004.
The purse premium has been modified twice – increased to $25,000 for contestants from 1990 to 1999, its current format started with the 2000 show, offering a total of $40,000 split between the top four earners during their 2 and 3-year-old seasons. The first year the 3-year-olds were rewarded, Nancy Alberts’ homebred Magic Weisner won in a landslide – he earned $791,000 his sophomore campaign.
For much of its existence, the show had been tied in with the Preakness. Not only was Pimlico the host site until 1960, when it was moved to the Timonium Fairgrounds, but the show was held either in the week leading up to the race or immediately after early in its history.
The most picturesque site was the lawn of Pimlico’s “Old Clubhouse.” The show moved to that location in 1940, well away from the stable area which was in the midst of a “coughing bug” scare.
With the Preakness as a backdrop, it comes as no surprise that a total of 17 Preakness-winning trainers are on the honor roll of judges.
Fitzsimmons sent out Omaha to win the Preakness two days after judging the 1935 show. But two of the classic-winning elite, Horatio Luro (trainer of Northern Dancer in 1964) and Billy Turner (trainer of Seattle Slew in 1977), took time the day after their classic victories to handle ring duties. And show exhibitors were thrilled to welcome former Maryland-based trainer Barclay Tagg back in 2003, the month following Funny Cide’s victories in the Kentucky Derby and Preakness.
Five trainers were asked to judge the show a year after sending out the Preakness winner – Max Hirsch (after winning the 1946 Triple Crown with Assault), Lucien Laurin (after Secretariat in 1973), Jack Van Berg (following Gate Dancer’s victory in 1984), Tim Ritchey (Afleet Alex in 2005) and Tom Albertrani (Bernardini in 2006).
It was noted in The Maryland Horse that for Laurin’s year, in which the weather “bordered on the edge of disaster,” as heavy rain coupled with 50 mile per hour winds swept the Timonium show ring located in the infield of the race track: “All in all, it was a thankless task for Mr. Laurin, who had flown in from New York the morning of the show. Sodden with his dripping clothes, Laurin battled out his assignment to the very end, never once complaining.”

While the weather is unpredictable, what’s guaranteed is the presenting of the championship trophy which, if won by the same exhibitor three times, is retired by the winner. A new, comparable trophy must then replace it. The first trophy of its kind was the Henry L. Straus Memorial, first offered in 1950.
Racing Hall of Fame steeplechase rider Rigan McKinney, whose yearlings won the show in 1957 and 1959, retired the Straus trophy in 1960 and replaced it with the Blarney Challenge Trophy, named for his Blarney Farm in Woodbine, Md.
It took nearly 40 years before an exhibitor was able to reciprocate. Yearlings from Robert Manfuso and Katharine Voss’s Chanceland Farm took top honors in 1992, 1994 and 1999. The Chanceland Farm Challenge Trophy was offered in 2000, and breeder Cary Jackson made quick work to take possession, exhibiting the grand champions of 2005, 2006 and 2010, and and twice in that 11-year span seeing two of his colts named reserve champion. 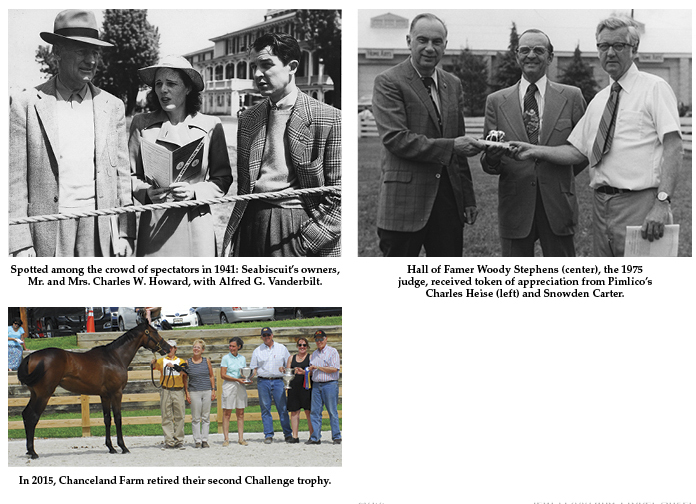 It took only five years for Manfuso and Voss to retire the Foxharbor Farm Challenge Trophy, replacing it with a new Chanceland Farm Challenge Trophy in 2016.
The leading owner of yearling show champions, with seven, was Alfred G. Vanderbilt. His first came in 1934 and his last in 1967, with a daughter of his famed stallion Native Dancer. Kevin Plank’s Sagamore Farm has continued the tradition, breeding and owning two champions since 2013.
Even the most knowledgeable and keen horseman can overlook a potential diamond, as the yearling show has proven over and over again.
Two Eclipse Award winners failed to win their classes.  Champion sprinter, multi­millionaire and Hall of Famer Safely Kept was completely overlooked in 1987, and champion 2-year-old Smart Angle was judged fifth-best in her class in 1978.
One of the most accomplished groups of runners came out of the 1993 show. Of the 87 yearlings exhibited, trainer Tommy Kelly selected as his champion and reserve champion future stakes-placed runners Royal Silver and Venus Genus, respectively.
But a filly he placed fourth that day totally outclassed them both, as multiple Grade 1 winner Urbane amassed more than $1 million on the track. Two others in the show who weren’t pinned in their classes also became accomplished runners – Preakness runner-up Oliver’s Twist and 1999 Maryland Million Classic winner Perfect to a Tee.
Sometimes, however, a hint of things to come seems apparent. Among the class winners over the years have been Eclipse Award winner Declan’s Moon, graded stakes winner Ready’s Image (2006), Run Alden (1992), Le Sauteur (1980) and Proper Angel (1994). Six grand champions have gone on to be stakes winners – Grand Champion (thus his name; 2004), Katie’s Love (2003), Earth to Jackie (1995), Alden’s Ambition (1982), Knocklofty (1961) and Sometime Thing (1953).
It’s hard to critique the judging over the years, since so many factors can affect a horse’s career, but it may be difficult to top the success of Barclay Tagg. After whittling down his selections from 112 yearlings shown in six classes  in 2003, he selected as class winners three future stakes winners, topped by Declan’s Moon.
The number of entries has fluctuated over the years –  from less than 30 in 1935 to the most ever in 1990, when Hall of Fame trainer Flint (Scotty) Schulhofer examined 140 yearlings (from 192 entered). In recent years, the number of entries has hovered at approximately 100, with about a 15 percent scratch rate on the day of the show.