MHBA and the Maryland State Fair

In July 1940, MHBA president Janon Fisher, secretary Goss L. Stryker and field secretary Humphrey S. Finney attended a meeting of the State Fair board to create a “first-class breeding show at Timonium” with a prize list worth $1,000. With the assistance of Louis Merryman, who was on the show committee as well as a member of the Fair Board, the first Breeder’s Show was held that September at the State Fair. 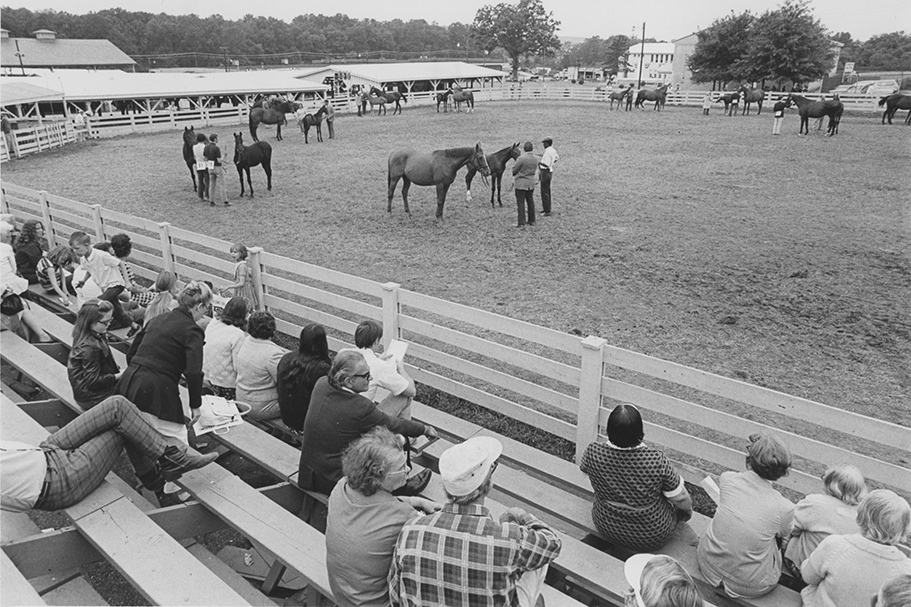 “In all 138 horses came before the judges,” it was reported, with classes offered for Thoroughbreds and half-breds. Three championship trophies were presented, and services to 16 stallions were offered as prizes to the top three ribbon-winning half-bred mares. The show was an enormous hit and grew significantly over the years, both in prize money and entries. The first year’s Thoroughbred champion was a yearling colt by Display; class winners included Fisher’s stallion Swashbuckler and Stuart Janney Jr.’s mare Bracken. The show continues to this day, although entry numbers are far smaller.
The Maryland Jockey Club was the majority shareholder of the State Fair property in Timonium and in August 1950 came word that MJC was selling some of its assets and had been approached by industrial interests to purchase the fair property. “Agricultural leaders, horsemen, business interests and bankers immediately got busy to form an organization to purchase the property,” reported The Maryland Horse, and the “Save Timonium Committee” was formed. With the MHBA and its members leading the way, the committee sold bonds ($500 apiece) and formed a corporation known as the Maryland State Fair and Agricultural Society Inc., which bought the site for $500,000, and has continued to operate it to the present day.
The MHBA’s annual yearling show, held from its inception in 1932 at Pimlico, was moved to the State Fair grounds in 1960. The show grounds have been transformed over the six decades since, but the show remains – now carried out in the horse show arena – and was held for the 60th time in Timonium this year.
Groundbreaking for a state-of-the-art sales pavilion took place on the southeast corner of the fairgrounds property in early summer of 1965, and was ready for operation for the MHBA and Fasig-Tipton’s highly successful Eastern Fall Yearling Sale held in late September. The MHBA had committed to lease the building for 30 days annually for 20 years.
Maryland-bred runners have been an integral component of racing at Timonium, and the MHBA supports
purses at the fair’s seven-day race meet. The races are highly popular with fairgoers, and the race track also provides opportunities for additional exposure, including MHBA sponsored pony races during the fair, as well as College Day at Fair, which debuted in 2018, which the MHBA supports with scholarships.
MHBA also has had a presence during the state fair for decades, first with a booth in the farm and garden building, and since 2015 as a founding member of Horseland, which bridges the gap between the amusement park rides and the Timonium racetrack. Located in a tented area and in operation throughout the 11 days of the fair, it offers family-friendly activities and plenty of information about horses and horse activities.