Belair, Bowling Brook, Country Life, Fox Hill, Fuss, Glen Riddle, Grove, Prospect Hill, Sagamore, The Caves, Verdant Valley, Worthington. . .  a few of these farms remain in operation today, but many woven into the fabric of the early history of the Maryland Horse Breeders Association are no more. The association published a list of 45 Maryland Thoroughbred farms for the first time in the February 1937 issue of The Maryland Horse, and over the decades the MHBA has kept tabs on the farms, acreage, stallions and breeding stock – all an important component of the state’s agricultural industry. 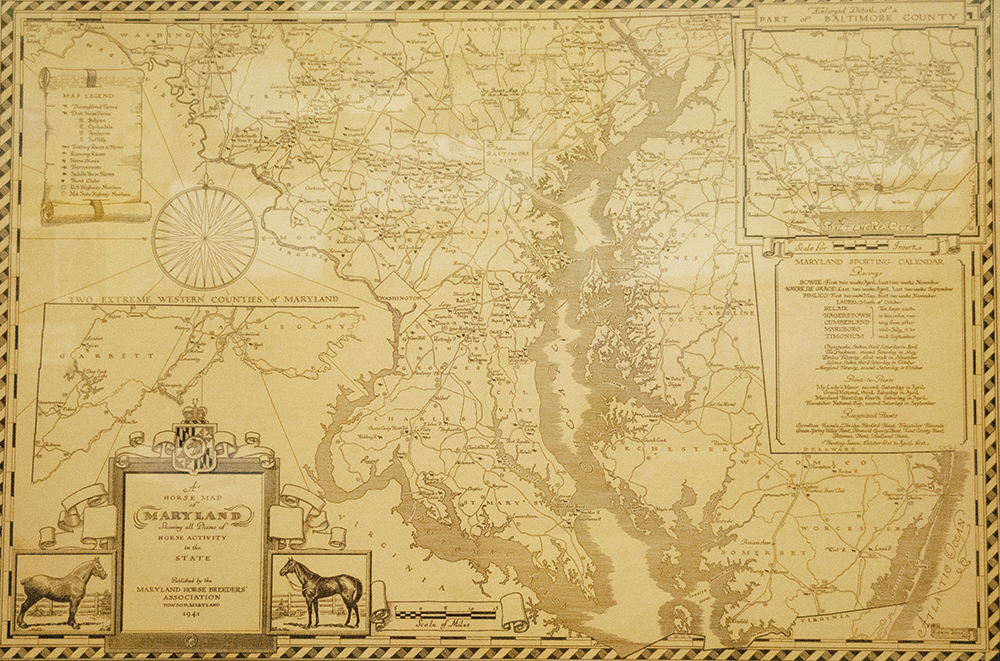 The 45 farms listed in 1937 covered nearly 21,000 acres in 11 counties. Two years later, MHBA field secretary Humphrey S. Finney counted the forms returned by state breeders and found there were approximately 400 mares used for breeding in the state, with more than 60 farms reported.

By 1945, Finney provided new census figures at the MHBA’s annual meeting – approximately 42,000 acres in Maryland were devoted to Thor-oughbred production, divided into 115 farms. There were 55 stallions, 400 mares and approximately 300 yearlings, with bloodstock and farm properties valued at about $5 million.

Results of an annual census from the Horse and Mule Association of America were published in The Maryland Horse each year, but soon more comprehensive figures on the state’s Thoroughbred industry were sought.

The MHBA conducted its own census and released the figures in April 1950 in The Maryland Horse. Thoroughbred production was taking place at 177 farms, in 18 counties, encompassing 46,797 acres. “Accepting the most conservative of valuations,” noted the magazine, “this would make the real estate alone involved in the proposition worth around $10,000,000. Add the value of the 70 stallions and 825 broodmares, together with about 500 yearlings and miscellaneous other Thoroughbreds domiciled on the farms and not reckoned as horses in training, and one has a pretty healthy investment in Thoroughbreds in Maryland.”

Numbers received a boost with the creation of The Maryland Fund in 1962. An MHBA survey released in April 1964 revealed there were 276 horse farms in the state, encompassing 46,047 acres. The count for Thoroughbred stallions was 158 – by far the largest in the state’s history. Of the 19 counties reporting at least one horse farm, Baltimore County remained the most popular, with 88 spread over 13,139 acres. There were 28 stallions and 365 broodmares reported in Baltimore County alone.

The MHBA launched its first full-fledged stallion register and farm maps issue in January 1965, and featured a five-color map of the state’s 384 horse farms. County maps showed the location of each Thoroughbred farm reported. The maps were updated and published annually over the next four decades. 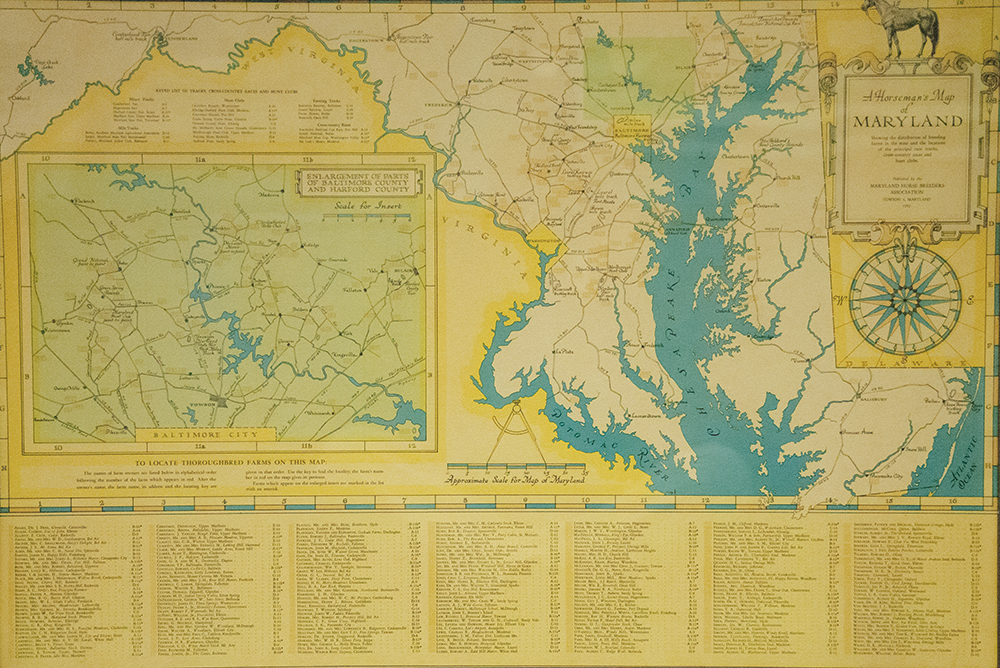 Various state and university studies of the industry have been made in recent decades. Then in November 2016 The Sage Policy Group Survey, a study to measure the economic and fiscal impacts of Maryland’s horse industry, was released, showing increases during the decade, traceable to the Maryland Slot Machines Amendment passed in 2008.

Working in conjunction with the MHBA and closely aligned industry partners and stakeholders, the survey team revealed gains in economic activity, jobs and revenue provided to state and local governments.

The MHBA promotes the state’s industry as well as keeping abreast of the numbers. In addition to the monthly publication of The Maryland Horse, and now Mid-Atlantic Thoroughbred, the association has produced films, farm maps and brochures, maintains websites and a social media presence, has coordinated farm tours and hosted international visitors.

By September 1949, the MHBA’s 16 mm. sound and color film The Maryland Horse, produced by Bernard Livingston, had been shown in 22 states. It was available to interested groups without charge beyond return postage.

The MHBA was also a supporter of the documentary Racing the Times, which made its debut in 2015. Covering the history of Thoroughbred racing in Maryland, it had its world premiere at the Senator Theatre in Baltimore that May, and aired on Maryland Public Television two days later. The film that was runner-up for an Eclipse Award in the category Television – Feature.

Over the decades the MHBA has organized stallion showings and retired horse parades at racetracks, farm tours across the state, and in September 1980 hosted a two-day National Breeders Conference in Hunt Valley, Md., with speakers and attendees from 22 states and Canada. Highlights included a boat trip to Chesapeake City, where Windfields Farm stallions Northern Dancer and The Minstrel were on display. When Russian connections arrived for the Washington, D.C., International in 1987, they were shown area breeding farms by members of the MHBA board. MHBA representatives were part of a Maryland contingent to visit South Korea in 1997 to build a trade market for state-bred horses. Last December a South Korean delegation visited farms and the Timonium sales as guests of the MHBA.

In May of this year, the MHBA hosted the Maryland Thoroughbred Horse Farm Tour, a free, self-guided tour of horse farms around the state open to the public.

Getting the word out about the importance of the industry has been a goal of the MHBA since its inception. It continues to this day. 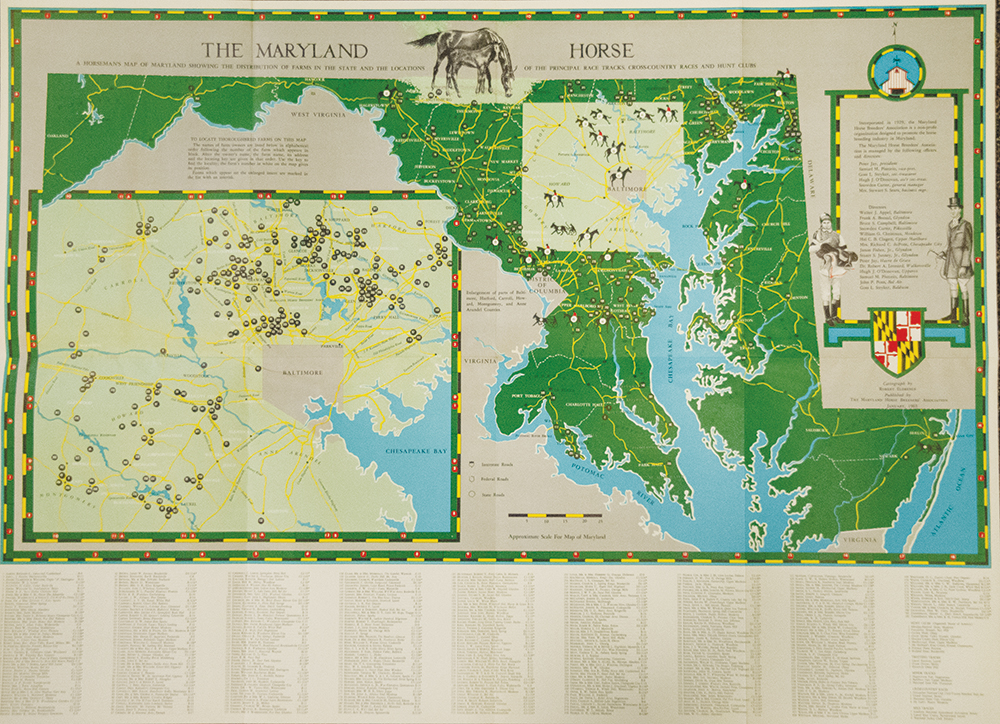 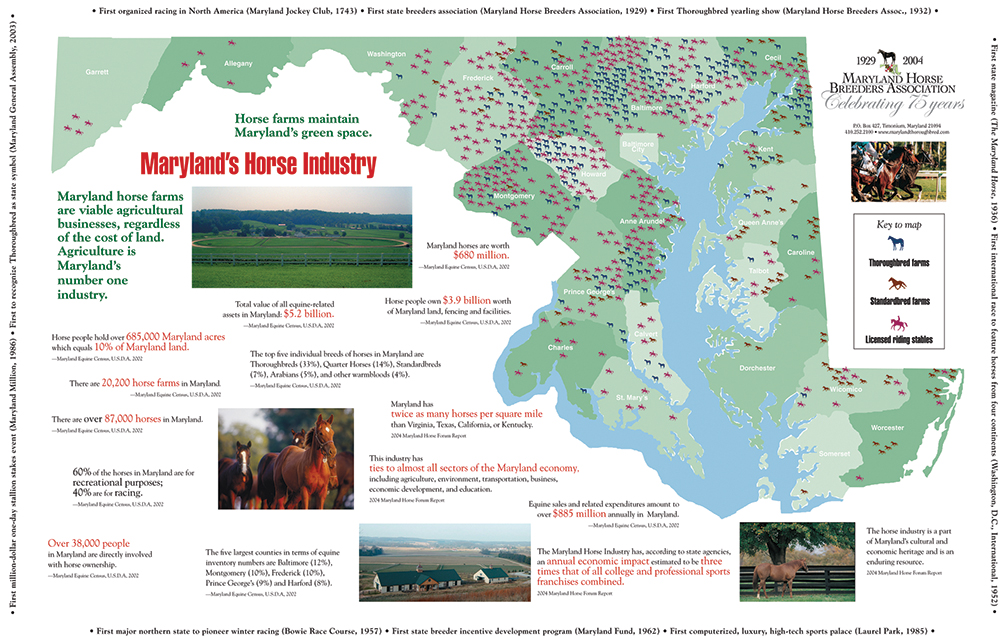