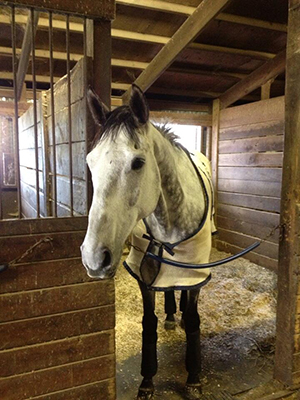 Michael Wharton’s Grinding Speed’s affinity for Great Meadow in Virginia was proven once again with a dazzling six and a three-quarters-length score in the course’s rich spring timber fixture, the $75,000 Virginia Gold Cup, on Saturday, May 4.

Trained by Alicia Murphy and ridden by Mark Beecher, Grinding Speed won last fall’s $50,000 International Gold Cup over the timber course by two and a half lengths, his final start of the year.

Grinding Speed prepped for the four-mile Virginia Gold Cup in the My Lady’s Manor Timber Stakes in April, which he was leading until falling at the second-last fence. For his second sanctioned start, he was patiently rated by Beecher until taking charge over the final two fences and drew off in the stretch. He completed the race in 8:50.80 on firm turf.

A claim of foul by Willie Dowling on second-place finisher Straight to It was disallowed.
Bred by Alan S. Kline, Mark T. Kline, Mitchell A. Kline and Madeline R. Kline, Grinding Speed is one of six winners from six foals for his dam Cozelia (by Cozzene) and her richest runner, with earnings of $129,740 from 20 starts. Since making the switch from hurdles to timber in the spring of 2012, Grinding Speed has a record of 8-4-3-0 and earnings of $100,350.