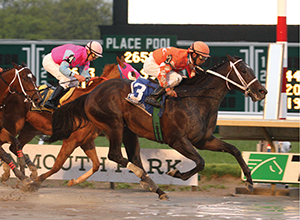 Pass You Bye Bye, racing in the colors of Cynthia Rickman’s Rickman Racing LLC, kicked off Monmouth Park’s 68th season on Saturday, May 11 with a stirring finish in the Decathlon
Stakes.

An enthusiastic crowd of 9,636 were on hand, despite monsoon-like weather, and watched as Pass You Bye Bye, the third-choice in the field of six, rallied on the outside under Julian Pimentel, collared the leaders in deep stretch and drew off near the wire to win the $75,000 Decathlon Stakes by a length.

A son of Shamrock Farm sire Rock Slide, Pass You Bye Bye raced the six furlongs in a brisk 1:09.34 over a sealed track made sloppy by heavy afternoon downpours, earning a 100
Beyer Speed Figure. Trained by Ron Alfano, the Laurel Park shipper paid $8 to win. “He is really a nice horse,” Pimentel said. “He didn’t care for the dirt coming at him, but once I got him into the clear, he was fine. Around the eighth pole, he really kicked in and that was it.”

Pass You Bye Bye, now 4, has won three of five starts this year, and boasts a lifetime record of 8-4-3-0, with earnings of $135,790. The Decathlon was his first start in a stakes, and his first race outside of Maryland. “The sloppy track wasn’t really a concern,” said Alfano. “His family did well over off tracks. He has a brother who won in the slop.”

Out of the You and I mare Pie I’d, Pass You Bye Bye is a half-brother to stakes winner Tartlet (by Zignew), and earner of $278,980. Tartlet was bred by Cynthia Rickman’s father,
William Rickman, and by a stallion who stood at Rickman’s Williams Grove Farm in Chesapeake City, Md. Pass You Bye Bye was foaled at Williams Grove Farm, and is one of four winners from five starters for his dam.