Blamed takes it all in the Royal Delta

Capping off a week in which she was named 2018 Maryland-bred champion 3-year-old filly, Cleber J. Massey’s Blamed put it all on the line and got her first win of 2019 by leading gate-to-wire in the $150,000 Royal Delta Stakes-G3 at Gulfstream Park on Saturday, Feb. 16. She was the fourth Maryland-bred stakes winner of the day, all in open company, the other three at Laurel Park. 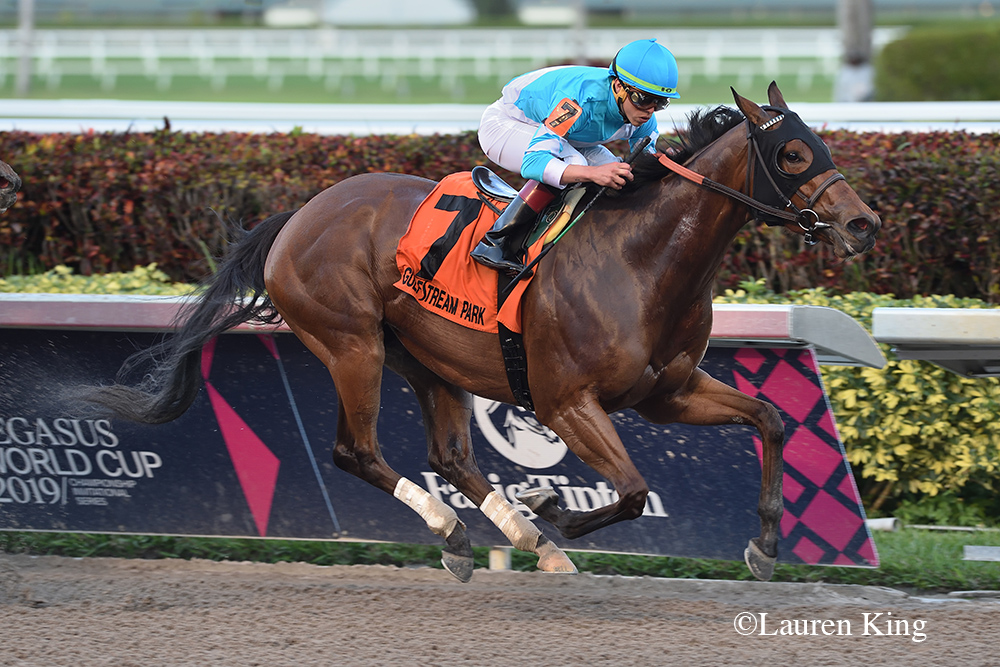 Sent out by Hall of Fame trainer Bill Mott, the odds-on favorite in the field of seven broke quickly, set fractions of :23.29, :45.63, 1:09.70 and 1:22.02, and had a clear lead into the stretch. She came home a length and a quarter in front, covering the mile distance in 1:35.18. It was a much improved effort off her first start of the year, the Hurricane Bertie Stakes-G3 three weeks earlier. Sent off as favorite in a field that included 2018 Eclipse Award-winning female sprinter Shamrock Rose, Blamed posted sizzling fractions of :22.58 and :45.18 before fading to fifth for the worst finish of her career. With the Royal Delta win, Blamed improved her record to seven wins and two seconds from 10 starts for earnings of $496,765.

Blamed was purchased privately by Massey after failing to reach her reserve (she was a $77,000 RNA) at the Keeneland September Yearling when offered by breeder Sagamore Farm. The filly’s career began with trainer Joel Marr in New Mexico at Zia Park and, after a second in her debut, she rattled off five wins in a row, three in stakes at Sunland Park, by an average winning margin of more than six lengths. On target for the Kentucky Oaks-G1, she was sidelined less than a week out by a hairline fracture in her right hind pastern. When she reappeared six months later, she was in the barn of Mott and making her graded stakes debut in Keeneland’s Grade 2 Raven Run Stakes. After setting the opening fractions of :22.27, :44.83 and 1:09.92, she was caught late by Shamrock Rose. She followed that with a stellar gate-to-wire score in the Comely Stakes-G3 at Aqueduct in November to cap her season.

A daughter of Blame out of the stakes-placed Giant’s Causeway mare Salsa Star, Blamed is a half-sister to stakes-placed Chubby Star. Sagamore sold Salsa Star, in foal to Super Saver, for $100,000 at the 2016 Keeneland November Breeding Stock Sale to Aysoob Stud Farm.