Lewisfield returns victorious in the $75,000 Not For Love

Following a three-month break, Linda Zang’s homebred Lewisfield gave it his all to win the $75,000 Not For Love Stakes for the second year in a row in his 5-year-old debut at Laurel Park on Saturday, March 16. 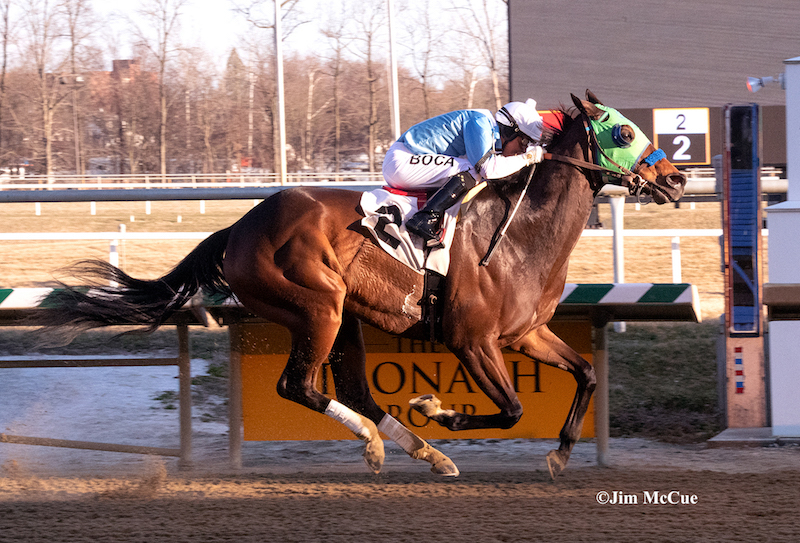 Breaking quickly from post 2 in the stakes for Maryland-bred runners, the son of Great Notion went the first quarter in :22.80 as he was pressed by 50-1 long shot Eastern Bay along the rail and 4-5 favorite Laki from the outside. He opened up down the backside through swift fractions of :45.70 and :57.04, came around the final turn three lengths on top as the rest of the field closed in on one another, and easily stayed clear to win by three and a quarter lengths over a rallying Rockinn On Bye, with Laki another length and three-quarters back in third, a head in front of Struth. His final time was 1:08.68, less than a second off the track record, and he earned a Beyer Speed Figure of 101, to date the highest of the year at Laurel Park.

Following a busy 2018 season of 10 starts over a span of 12 months, trainer Jeff Runco felt it was time to give Lewisfield a break. “We took him back to the farm and put some weight on him. He looked a lot better when he came back in, and when he came back training he was just moving better. A little ‘R&R’ did great things for him,” Runco said.

Sired by Maryland’s top stallion Great Notion out of Smart Crowd, by graded stakes winner Crowd Pleaser, Lewisfield was unraced at 2 and began his career with a third in a seven-furlong maiden special weight at Charles Town in June 2017. He broke his maiden in his next start six weeks later at the West Virginia track, then won his next two at Laurel. In his fifth career start he was second to Struth in his stakes debut in the Howard M. Bender Memorial at Laurel in December 2017.

Lewisfield has nine stakes wins or placings, including an additional score in the Maryland Million Sprint Handicap last October, and a graded stakes-placing when third in last year’s Maryland Sprint Stakes-G3 at Pimlico on Preakness Day. He finished first in the Polynesian at Laurel last August, defeating Laki by a nose, but was disqualified to second for causing interference in deep stretch. His record now stands at 7-3-4 in 16 starts, for earnings to $371,297.

Read more about the Not For Love here