Runnymede Racing’s Alwaysmining made his two-turn debut look effortless as he led the field to capture the $100,000 Private Terms at Laurel Park on Saturday, March 16. The talented 3-year-old gelding extended his win streak to five races, the past four in stakes. 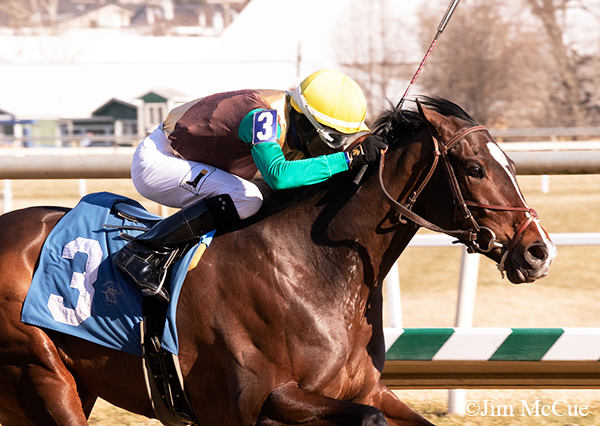 At a mile and a sixteenth, the 30th running of the Private Terms for 3-year-olds was Alwaysmining’s longest distance so far, following his past four wins at either seven furlongs or one mile. The Kelly Rubley trainee set the pace from the beginning, breaking from the third post to lead Joevia and Tybalt. The 1-2 favorite, Alwaysmining opened up by four lengths after a half in :48.44.

The distance clearly had no effect on the son of Stay Thirsty as he raced to the wire, extending the gap between him and Joevia to win by six and three-quarters lengths in 1:42.65 over a fast main track. “He looks like he’s galloping, just relaxed. He’s a very classy horse,” Rubley said.

Rubley chose to test Alwaysmining at the longer distance on his home track, opting out of Oaklawn Park’s Grade 2 Rebel the same day. The gelding is now won six of eight at Laurel Park, and boosted his career earnings to $311,192 from 11 starts. His five-race win streak, all while running at Laurel, include the Maryland Juvenile Futurity and Heft Stakes last December, and the Miracle Wood Stakes in February.

Following his Private Terms win, Alwaysmining is now considered one to watch on the Triple Crown trail based on his current winning streak and his increasing taste for carrying speed at longer distances, according to Steve Haskin’s March 19 version of “Derby Dozen.”

Bred by Maryland horsewoman Avla Pitts, Alwaysmining is out of the Anees mare What Will Be, who has four winners from five named foals. Alwaysmining was purchased privately by Caroline and Grey Bentley’s Runnymede Racing from James McIngvale after breaking his maiden at Laurel last June.