Facing a dozen rivals and racing as far back as nine lengths midway in the five and a half-furlong turf sprint, Tom O’Grady’s Dirty swung to the far outside and closed steadily in the stretch to get up and win the inaugural $100,000 King T. Leatherbury by a neck. One of four MATCH stakes on the April 20th Laurel program, the race was worth 10 points in the 3-Year-Olds and Up Sprint–Turf Division. 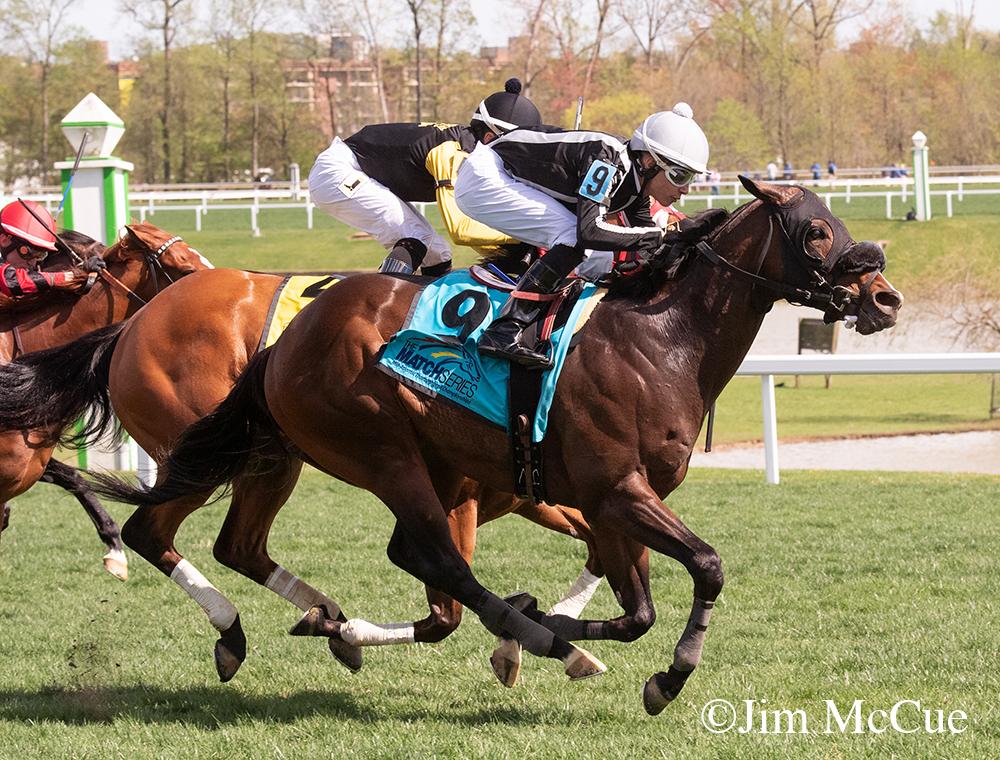 It was the first start of the year for the 4-year-old trained by Jeremiah Englehart, and he set a new course record of 1:00.65 over the Dahlia course, breaking the previous mark of 1:01.25 established in 2013.

Purchased by O’Grady for $120,000 at the 2017 Fasig-Tipton Midlantic May 2-year-olds in training sale, Dirty has made a dozen starts to date, the majority while based in New York. He didn’t get his first win until risked for a $40,000 tag at Gulfstream Park in March 2018, recorded his second win in a Belmont Park starter allowance in late May and has raced in stakes and allowance company since. In his only previous start at Laurel, he won by five lengths last June at the five and a half-furlong distance on the turf. He followed with two stakes-placings in New York that summer – a third in the Quick Call at Saratoga and a second in the Allied Forces at Belmont Park. With his Leatherbury win, he pushed his earnings to $202,255.

A son of Maclean’s Music, Dirty was bred by Barak Farm and sold as a yearling for $67,000 at the Fasig-Tipton Kentucky October sale. He is the first foal for the winning Yes It’s True mare Martini; his second dam is multiple stakes winner and $404,337-earner Tropical Punch, a Maryland-bred daughter of Two Punch who accounted for two Maryland Million wins in her career (the Distaff and Distaff Starter) and was four-times graded stakes-placed. Turf sprinting is in the genes – Tropical Punch’s half-brother Happy Surprise set a course record at Laurel for five and a half furlongs when winning the Maryland Million Turf Sprint in 2007.

Martini is also the dam of the Super Ninety Nine filly Nine Martinis, winner of her 2-year-old debut at Churchill Downs last November. Her third foal, a filly by Divining Rod, was born this February.