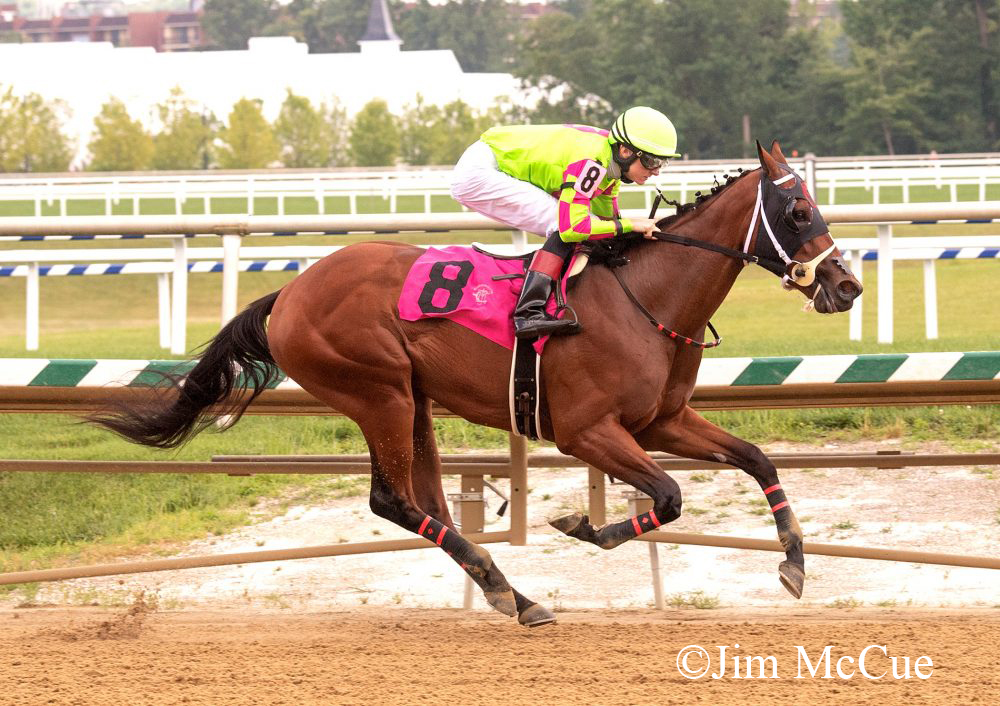 Favored at 4-5 in the field of seven, Miss J McKay ran five and a half furlongs in 1:04.61 over a fast main track and scored by five and a quarter lengths under jockey Trevor McCarthy. Breaking from the far outside post, McCarthy settled Miss J McKay in the clear three wide to the outside of Landing Zone, who went the opening quarter in :22.84. Miss J McKay secured the lead midway around the far turn, opened a clear advantage and was wrapped up by McCarthy for the final sixteenth of a mile.

“You can never be confident on their works until they actually show up in the afternoon and do it, but she’s been doing everything right in the morning,” winning trainer Cal Lynch said. “We were hoping that she’d show up like she did today.”

Miss J McKay was bred in Maryland by Linda Oliff Rohleder of Centreville, Md. The first foal out of the Street Boss mare Ballykiss, Miss J McKay was a $1,500 weanling at the Fasig-Tipton Midlantic December mixed sale and fetched $55,000 as a yearling at the Eastern Fall sale last October. She did not reach her $85,000 reserve when offered at the Ocala Breeders’ Sales April auction of 2-year-olds in training, and joined Lynch’s string at Laurel.

“[They] bought her as a pinhook prospect and we didn’t get we wanted for her at OBS, so we got to keep her and train her and I’m glad we did. I think she’s going to be a nice filly,” Lynch said. “When the guys bought her, they had no idea who [Hangover Kid] was. I’m glad to have this one. Hopefully, it’s not the last [winner].”

Hangover Kid is a graded stakes-winning son of 1999 Belmont-G1 and Travers-G1 winner and 2000 champion older horse Lemon Drop Kid. In 26 starts over four seasons he won or placed 17 times while earning $643,203. Excelling on the turf, Hangover Kid won the Bowling Green Handicap-G2 at Belmont Park at a mile and a half during his 6-year-old campaign, captured Saratoga’s West Point Stakes the previous year, and counted a Grade 1-placing when third in the United Nations Stakes-G1. Trained by Jason Servis, he was also second in the Monmouth Stakes-G2 and Red Smith Handicap-G3.

Hangover Kid entered stud in 2016 and has six registered foals in his first crop. He stands at Murmur Farm in Darlington for $2,500 live foal, payable when the foal stands and nurses.