Ghoul’s Night Out gets first stakes win in Jameela

Mens Grille Racing’s Ghoul’s Night Out outran her 19-1 odds in the $75,000 Jameela Stakes, driving down the stretch to score her first stakes win by a neck on Sunday, July 14 at Laurel Park. 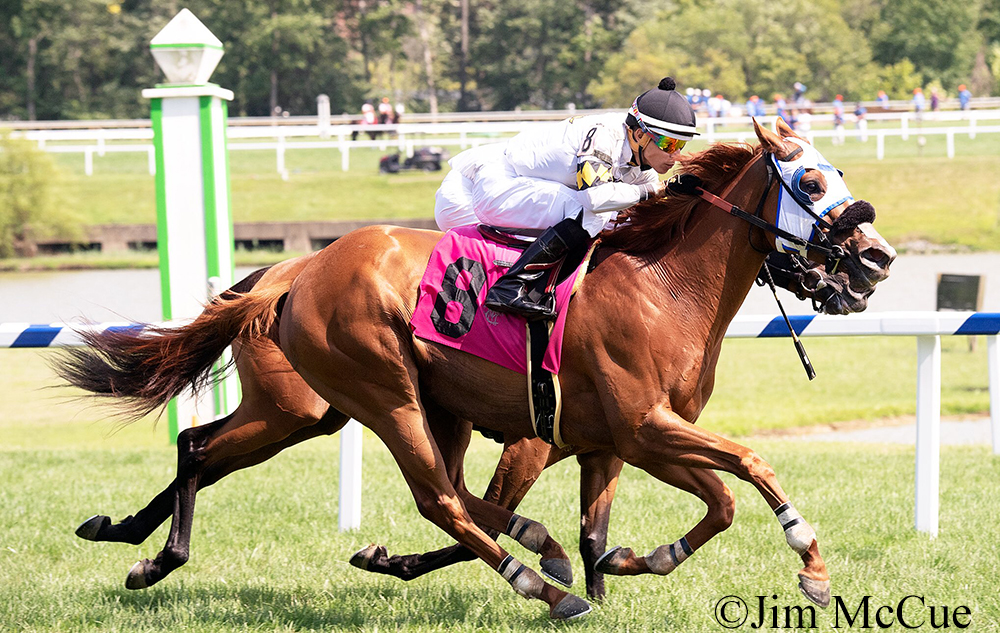 In her fourth start of the season, the 5-year-old mare spent the majority of the five and a half-furlong stakes for Maryland-bred/Maryland-sired fillies and mares in midpack as pacesetters Magician’squestion and Elevated Vision posted fractions of :22.16 and :45.27. Despite a powerful midstretch move by second-place finisher A Great Time, Ghoul’s Night Out managed to move up and pass them all in the final yards to get the win in 1:02.65.

Trained by Hamilton Smith, this was Ghoul’s Night Out’s first victory on the turf in three attempts, improving her record to 5-7-3 from 23 career starts for earnings of $238,481.

“She ran twice on the grass and handled herself pretty well both times,” Smith said. “It was a tough race, no doubt, but she came into the race real good and I expected her to run good. I didn’t think she’d win it, but I thought she’d run well.”

Bred by Two Legends Farm and Sycamore Hall Thoroughbreds, LLC, the daughter of Ghostzapper was purchased for $42,000 by Cool Hill Farm at the 2015 Fasig-Tipton Midlantic Eastern Fall yearling sale and later sold to Patrice Miller/EQB, agent for $150,000 in the April 2016 Ocala Breeders’ Spring Sale of Two-Year-Olds in Training.

Ghoul’s Night Out broke her maiden in her fifth career start in a Laurel Park maiden special weight in January 2018, a little over a year after making her first start in December 2016, where she finished fourth. The Jameela was her stakes debut.

To read more about the Jameela Stakes, click here