Introduced wins the battle in the Miss Disco

Heavily-favored Introduced locked into a battle with Bunting through the Laurel stretch and pulled away late to notch her first stakes win in the six-furlong $75,000 Miss Disco Stakes for 3-year-old Maryland-bred or Maryland sired fillies on Maryland Pride Day, Saturday, Aug. 17. A successful runner on the turf, Introduced is now undefeated in two starts on the main track. 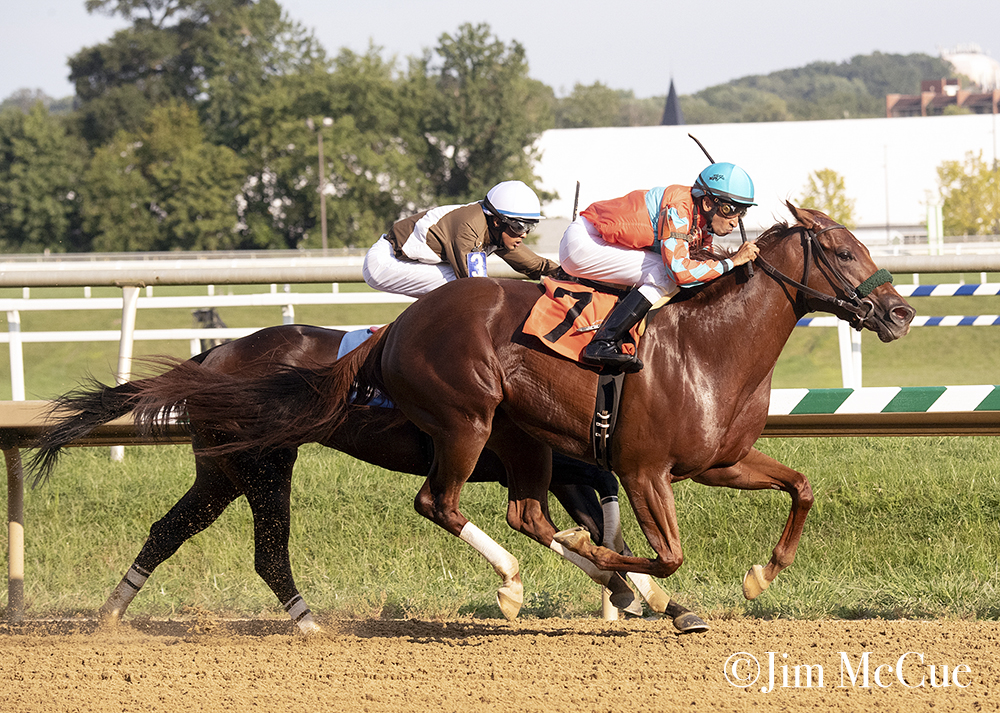 Coming in off a third-place finish in Laurel’s Stormy Blues Stakes at five and a half furlongs on the turf in July, the Colts Neck Stables’ filly trained by Jorge Duarte Jr. edged clear under Julian Pimentel to win the Miss Disco by a half length over Bunting, who set fractions of :22.72, :45.55 and :57.44. Final time over a fast main track was 1:10.14.

Introduced made her debut at Saratoga in August last year and finished second after setting the pace and being caught late by another first-time starter, Concrete Rose, who went on to win four graded stakes, including the Grade 1 Belmont Oaks Invitational Stakes in July.

In her next outing, Introduced was entered in a maiden turf race at Laurel, and stayed in when the race came off the grass. She won easily by three lengths. In her third and final start at 2, she missed winning the Stewart Manor Stakes at Aqueduct by a nose.

Bred by Richard Golden’s Sycamore Hall Thoroughbreds, Introduced is by the late Northview PA stallion El Padrino out of the winning Cherokee Run mare Stuttgart. Consigned by Northview Stallion Station to the 2017 Fasig-Tipton Midlantic Fall Yearling sale, the chestnut filly was purchased for $30,000 by Sarah Sharp. The following March at the Ocala Breeders’ Sale Company’s 2-year-olds in training sale she sold for $310,000 to Charles Boden, agent for Colts Neck Stables LLC. In eight starts, she now has a record of 3-3-1 for earnings of $152,759.

Stuttgart has three foals by Golden Lad since producing Introduced – a 2-year-old colt named Sir Back in Black who has yet to start; a yearling filly and a 2019 colt born in April. She was bred back to Madefromlucky.

Read more about the Miss Disco

Artful Splatter rises above the rest in Geisha

Making her stakes debut in the 47th running of the $75,000 Geisha Stakes, Artful Splatter managed a gate-to-wire win over 10-time stakes winner and heavy favorite Anna’s Bandit on Saturday, Jan. 18 at Laurel Park.

Runnymoore Racing’s multiple stakes winner Alwaysmining kicked off the new year victoriously as he captured the historic Jennings Stakes for Maryland-bred or -sired runners on Saturday, Jan. 18 at Laurel Park.