Klaravich Stable Inc.’s Selflessly excelled in her stakes debut, breaking her maiden in the $200,000 Miss Grillo Stakes-G2 for 2-year-old fillies at Belmont Park on Sunday, Sept. 29, and is now Breeders’ Cup bound. 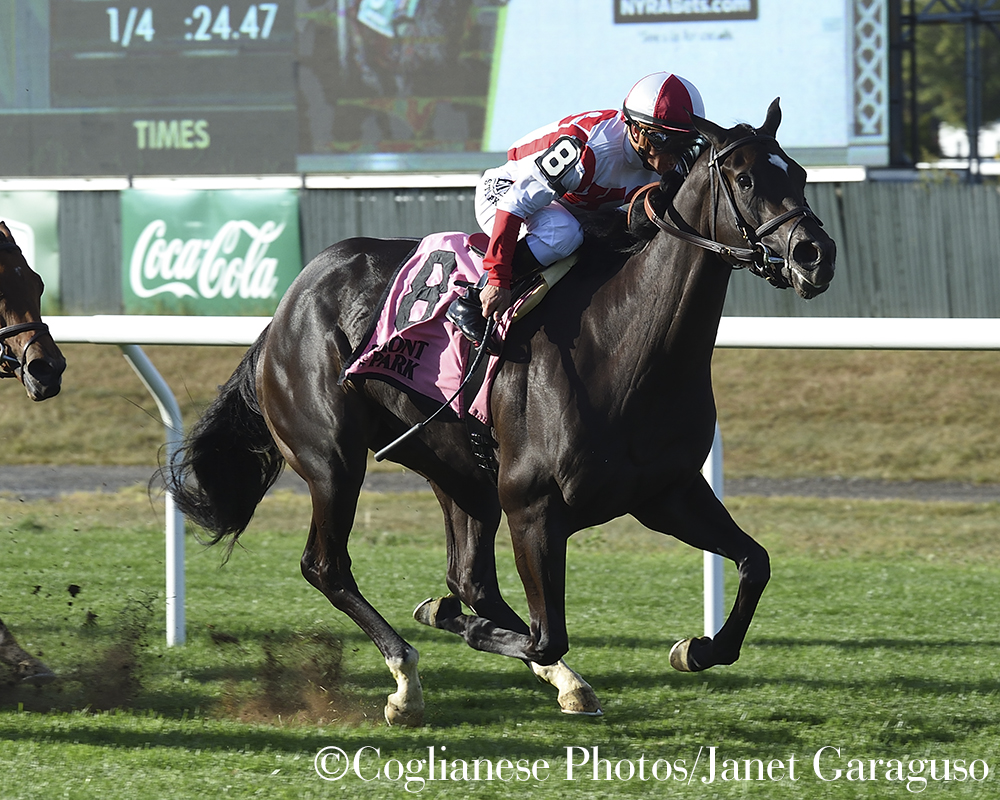 The Chad Brown trainee broke from the outside post, raced three-wide early and settled into third, a few lengths off the early pace, for the first three-quarters of a mile. With Javier Castellano in the irons, she was angled five wide at the top of the stretch and took command, then held off the late closers to win by three-quarters of a length.

Selflessly stretched out comfortably in her first start at a distance, covering the mile and a sixteenth over the firm turf in 1:42.32. The daughter of More Than Ready made her career debut a month prior in a five and a half-furlong maiden special weight on the turf at Saratoga, where she finished second by a neck to stablemate Jazzique (Ire), the third-place finisher in the Miss Grillo.

“I think stretching out and the experience from that first start were the keys here. She ran a really good race on debut and was unlucky not to win,” Brown said. “She galloped out well in the race and she has really done everything right since her debut. With these 2-year-olds, we get them started when they’re ready and let them come along at their own pace. She came into this race really training well, and I just treated the debut as if she won.”

Bred by George Louis Doetsch Jr., Selflessly sold as a weanling in the 2017 Keeneland November Breeding Stock Sale for $190,000 to DeMeric Stables, agent. Selflessly is out of the Grand Slam mare Uniformly Yours, who also produced two-time stakes winner Enchanted Ghost (by Ghostzapper), winner of this year’s Maryland Racing Media Stakes at Laurel. The fillies are Uniformly Yours’ only runners of racing age. The mare’s yearling filly by Honor Code sold for $100,000 at this year’s Keeneland September sale; she produced a Kitten’s Joy colt this past April and has been bred back to that leading sire for 2020.

Selflessly has earned $128,000 in her two starts. Although she isn’t nominated for the $1,000,000 Breeders’ Cup Juvenile Fillies Turf-G1, Brown said the filly would likely be a supplement to the event.