Smokin Caraquena up to the task in $60,000 Turf Distaff Starter Handicap

Jennifer Taylor’s Smokin Caraquena didn’t let the intensity of the race phase her as she pushed ahead to win the $60,000 Maryland Million and/or Registered Maryland-Bred Turf Distaff Starter Handicap by a nose on Saturday, Oct. 19 at Laurel Park. 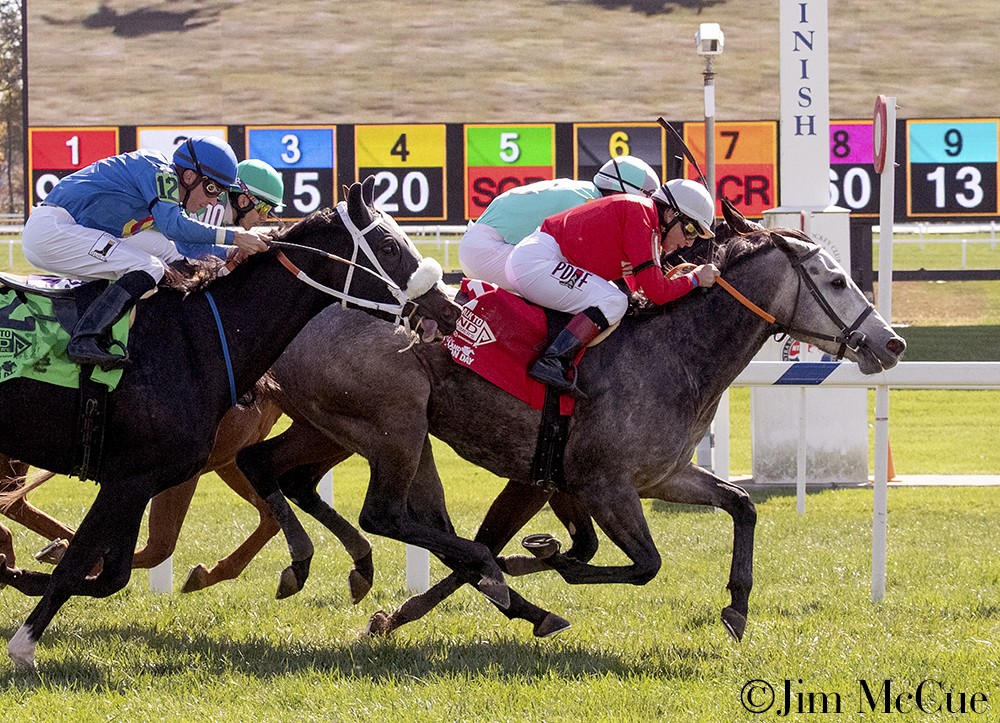 Entered in her first stakes race off a claiming victory at Laurel in September, Smokin Caraquena broke from the inside and settled next to last early in the field of 10, a dozen lengths behind pacesetter Eye of the Wildcat. Saving ground, she gained steadily, made a four-wide move around the far turn and closed down the stretch to catch Clare’s Dowery in a thrilling charge to the wire where the top four runners were separated by less than a length. Smokin Caraquena finished the mile and an eighth over the turf in 1:51.24.

A 4-year-old daughter of former Maryland sire Hunters Bay trained throughout her career by Carl Rafter, Smokin Caraquena was unraced at 2 and never better than fifth in four starts at 3, but has now won three of her four starts this year, all coming on the turf. She got her first win while in for a $10,000 tag going a mile at Colonial Downs in August, scoring by two and a half lengths. Her eight-start career has taken different paths in a short time; during her 3-year-old season she started three times at Charles Town, at distances from six and a half furlongs to a mile and a sixteenth, and was sent over a soft turf course going one and a half miles at Great Meadow against older runners.

Smokin Caraquena was bred by Mr. and Mrs. A. John Price and is the first foal and first winner for the Bernstein mare Easy Biscuit.