Sharing became the fourth Maryland-bred in history to win a Breeders’ Cup race with a decisive score in the $1 million Breeders’ Cup Juvenile Fillies Turf-G1 at Santa Anita on Future Stars Friday, Nov. 1. 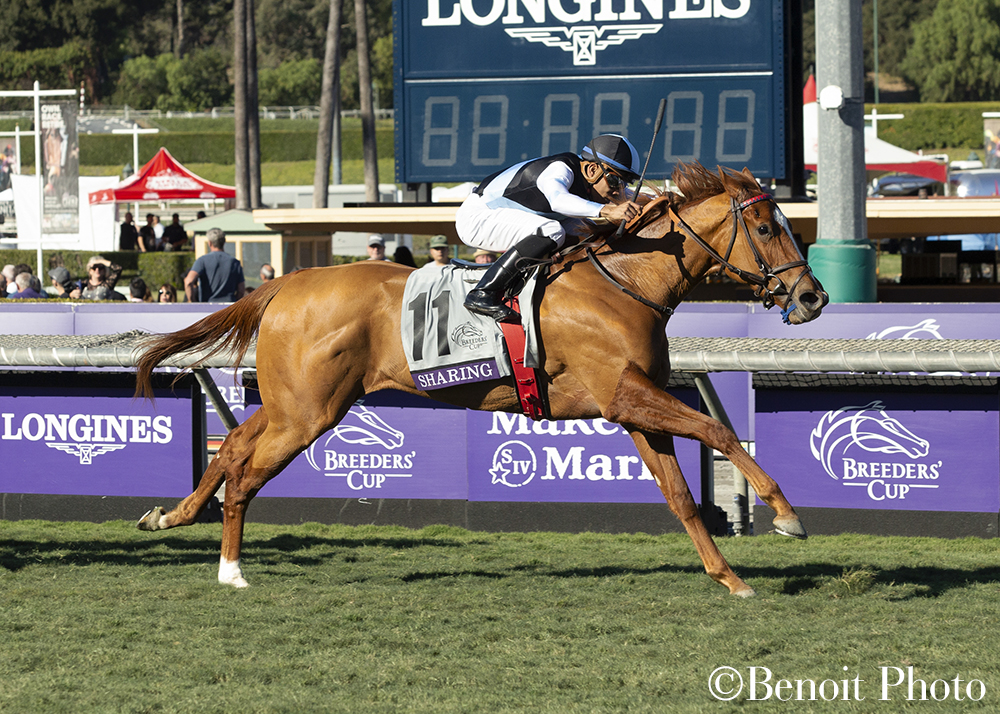 Owned by Eclipse Thoroughbred Partners and Gainesway Stable, the 2-year-old daughter of Breeders’ Cup Sprint-G1 winner Speightstown asserted her dominance to win by a length and a quarter length over favorite Daahyeh (GB).

Breaking cleanly from the 11 post in a full field of 14, Sharing found her stride and was sent to the front by Manuel Franco to establish position, settling in fourth around the first turn and down the backstretch, with Abscond setting early fractions of :22.74 and :47.02 through the opening half mile. Moving up on the outside around the far turn, Sharing turned for home three-wide and blasted down the stretch. The Graham Motion trainee, sent off at 13-1, completed the mile on the turf in 1:34.59.

Finishing third in her career debut in Saratoga in July, Sharing broke her maiden a month later in her second start, winning a seven-furlong off-the-turf maiden special weight at Saratoga by six and a quarter lengths in August. In preparation for the Breeders’ Cup, the Fair Hill-based filly then made her stakes debut in Maryland.

Motion weighed his options between shipping Sharing out of town to attempt an automatic berth into the Juvenile Fillies Turf or staying close to home. Ultimately, the decision was made to enter her in the Selima Stakes at Laurel Park on Sept. 21, which was bumped up to a $200,000 purse this year by the Maryland Jockey Club and racing secretary Chris Merz.

“Kudos to Laurel and to Chris [Merz]. We pointed for that race because we thought it was enough to get us to the Breeders’ Cup,” Motion said. “We didn’t want to wait another week and go to one of the ‘Win and You’re In’ races. We wanted to give her the optimum time in order to get her to the Breeders’ Cup in the best condition, and in order to do that she had to win that race.”

Sent off the 1-2 favorite in the Selima, Sharing pulled away down the stretch to win by two and a half lengths.

With her Breeders’ Cup victory, Sharing increased her win streak to three and now has $730,300 in earnings. Shipped back to Motion’s Fair Hill base, her connections plan to give her the rest of the year off and figure out logistics regarding the launch of her 3-year-old campaign.

Sharing was bred by Sagamore Farm out of Breeders’ Cup Filly and Mare Turf-G1 winner Shared Account, who was also trained by Motion. Retired in 2011 with a record of 6-4-1 in 18 career starts and $1,649,427 in earnings, the daughter of Breeders’ Cup Classic-G1 winner Pleasantly Perfect produced her first foal at Sagamore in 2013, the Bernardini colt R J Bentley, and followed with the stakes-winning Maryland-bred filly Riley’s Choice, winner of last year’s All Brandy Stakes at Laurel Park and an earner of $172,838. Campaigned by Sagamore, Riley’s Choice was retired this year and bred to Blame.

Sharing is the third of Shared Account’s foals born at Sagamore – the mare was barren after being bred to Into Mischief for 2018 and sold, in foal to Mastery, for $550,000 to Sam-Son Farm at the 2018 Keeneland November Breeding Stock sale.

To read more about the Breeders’ Cup Juvenile Fillies Turf and watch the replay, click here