Hello Beautiful bid goodbye to the rest of the field as she stormed down the stretch to take the $100,000 Maryland Juvenile Filly Championship on Saturday, Dec. 7 at Laurel Park. 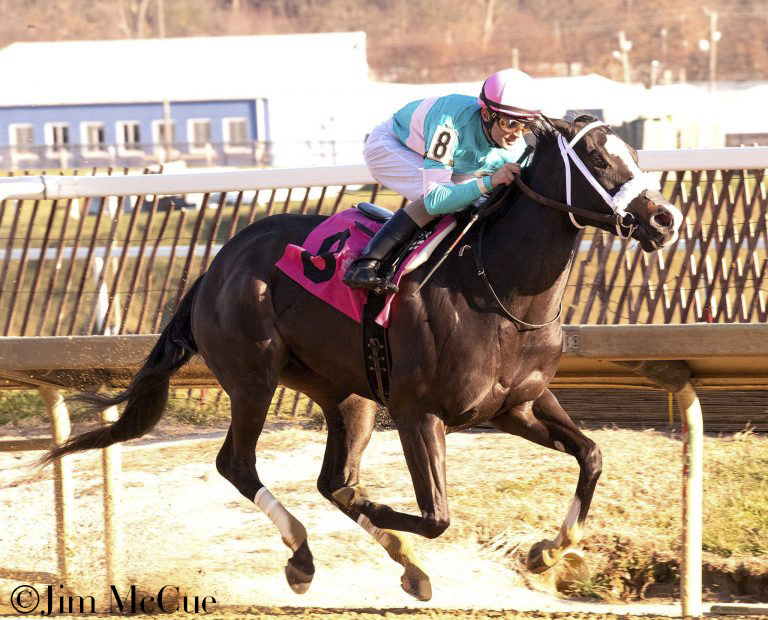 Madaket Stables LLC, Mark Frasetto, Mark Parkinson, K-mac Stables and Magic City Stables’ Hello Beautiful wasted no time, breaking to the front of the pack and setting early opening fractions of :22.49 and :45.34. Stickingtogether trailed nearly two and a half lengths behind, with Miss J McKay biding time in third, as the front-running daughter of Northview Stallion Station’s Golden Lad surged around the final turn and into the stretch. After three-quarters in 1:09.88, Hello Beautiful powered effortlessly ahead, hitting the wire 11 3/4 lengths in front of Miss J McKay, with Naughty Thoughts in third. She completed the seven-furlong test in 1:22.43.

Going a furlong longer than her previous start, Hello Beautiful proved the distance was no obstacle and added a second stakes win to her record. Two months prior, the 2-year-old Brittany Russell trainee made her stakes debut in the Maryland Million Lassie, passing with flying colors as she won three and a quarter lengths over Stickingtogether.

“She’s really straightforward. We really didn’t have to do any extra training,” Russell said. “She’s easy. She does everything herself. We just stay out of her way.”

Bred by Hillwood Stables LLC, Hello Beautiful was consigned to last year’s Fasig-Tipton Midlantic December Mixed Sale and purchased for $6,500 by Russell. Campaigning for her trainer and Dark Horse Racing LLC, the dark bay filly finished third, then second, in her first two career starts before breaking her maiden by five and a half lengths in July at Laurel. Following her victory, Hello Beautiful was purchased privately by her current connections.

Following her most recent victory, she’s earned herself some time off. “We’re going to give her a vacation, I think,” Russell said. “Next year as a 3-year-old, we’ll make some plans from there.”

Out of the Tiznow mare Hello Now, Hello Beautiful is the only winner of her dam’s two starters, from four foals produced. Hello Now was bred to Hoppertunity for 2020.