The Midlantic December Mixed and Horses of Racing Age sale, held Tuesday, Dec. 10 in Timonium, showed increases across the board, highlighted by stakes winner Laddie Liam setting a new sales record and topping the sale when sold for $450,000. 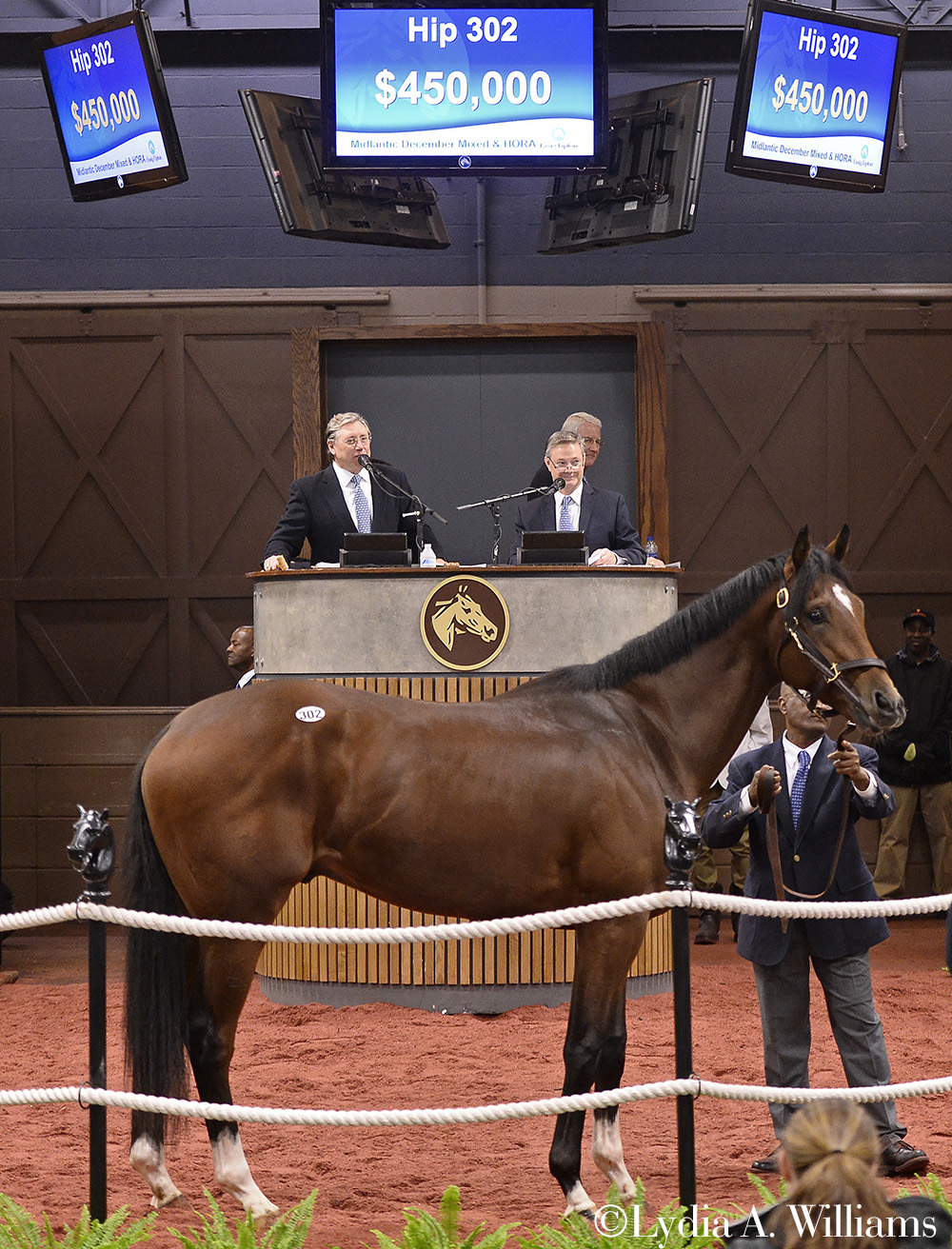 With 367 horses of all ages catalogued, three Maryland-breds sold for six-figures, with juveniles Laddie Liam and Mine Not Mine accounting for the two highest prices, both sons leading Maryland freshman sire Golden Lad from the Dispersal of Joseph Besecker, Northview Stallion Station (David Wade), agent.

Winner of the Maryland Juvenile Futurity at Laurel Park three days before the sale, Laddie Liam was purchased by DJ Stable for $450,000. The bay colt finished third in his career debut at Penn National in August, followed with a waiver maiden win at Laurel and a third in his stakes debut, the Maryland Million Nursery, at Laurel. Adding an allowance win prior to his Futurity victory, his record has improved to 3-0-2 with $128,556 earned.

Besecker purchased Laddie Liam, bred by Ellen Charles’ Hillwood Stables LLC, at last year’s December Mixed sale for $14,500. Laddie Liam is one of two winners for his dam, the Quiet American mare Buffgirl, a half-sister to the dam of multimillionaire Prayer for Relief.

Mine Not Mine, who finished a troubled fourth in the Maryland Juvenile Futurity in only his second start, was purchased by Charles J. Zacney for $210,000. The dark bay colt won his debut, a 1-mile waiver maiden at Laurel, in November. Besecker purchased him for $72,000 in last year’s Fasig-Tipton Midlantic Eastern Fall Yearling sale.

Bred by Robert T. Manfuso out of the graded stakes-winning Unbridled mare Belterra, Mine Not Mine is a half-brother to stakes winner Taketheodds and to the dam of Kentucky Oaks-G1 winner Cathryn Sophia, from the family of Royal Haven.

Four-time stakes winner O Dionysus, consigned by Marshall W. Silverman agent, was purchased by Irv Naylor for $135,000. A 5-year-old gelded son of Bodemeister, O Dionysus won the Japan Turf Cup Stakes in September at Laurel, his second stakes win at a distance of one and a half miles, and through the end of November had a record of 7-5-4 from 26 starts and earnings of $438,574 for owner Marathon Farms Inc. Bred by Dark Hollow Farm, O Dionysus sold for $190,000 to Peter G. Angelos at the 2015 Fasig-Tipton Midlantic Eastern Fall Yearling sale.

O Dionysus is a half-brother to Joy, a multiple stakes-winning daughter of Pure Prize who earned $250,544, and to stakes-placed Combat Diver, out of the Flatter mare Safe Journey. His second dam, stakes-placed Safe At the Plate, is a half-sister to Hall of Famer, champion sprinter and Breeders’ Cup Sprint-G1 winner Safely Kept, and graded stakes-winner and sire Partner’s Hero.