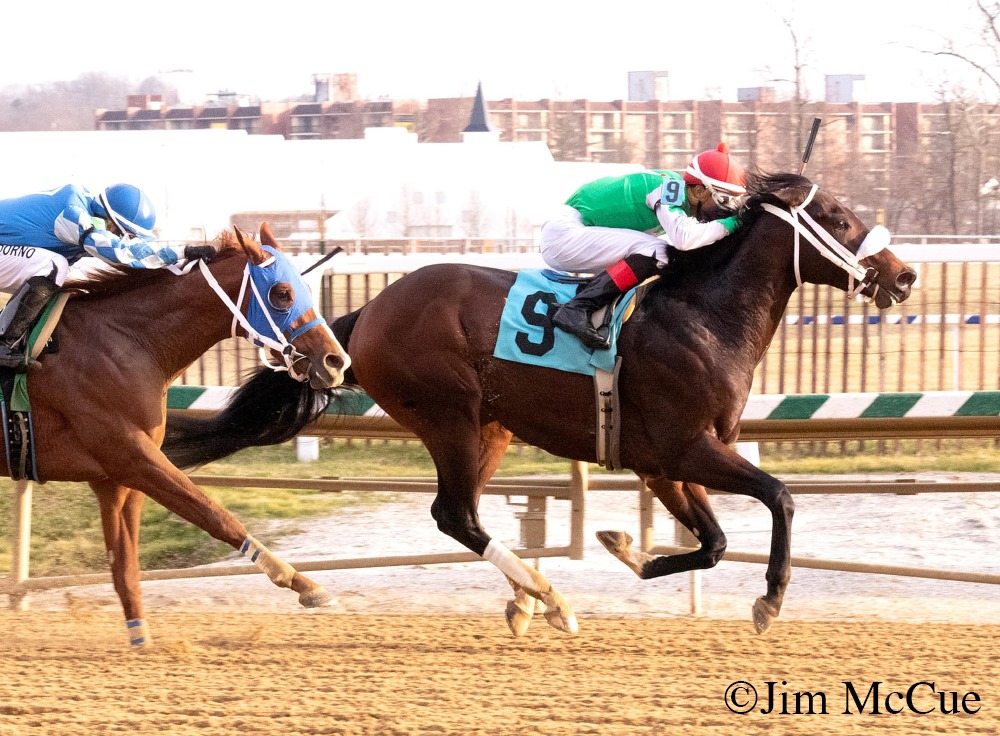 Securing a stakes victory in his third career start, Monday Morning Qb finished the seven-furlong test in 1:23.46. Having made his first two starts at six furlongs or less at his home track Parx, he finished second in his debut in October before breaking his maiden a month later, winning by two and a quarter lengths. He was the morning-line favorite for the Maryland Juvenile Futurity on Dec. 7 but was scratched the day of the race.

“I was impressed because we asked a lot of him today – coming on the road, coming to a track we weren’t familiar with, and going the seven-eighths of a mile. I always felt this horse was a distance horse. We’ve only begun to scratch the surface with him, I think. We’ve got other ideas down the road,” Reid said.

Monday Morning Qb, bred by Bowman and Higgins Stables and Cary Frommer, finished out his 2-year-old season with $105,000 in earnings.

“We’re going to take it one step at a time. Now he’s out of conditions so there will be a stakes race somewhere for him,” Reid added. “We want to go a longer distance, too, so our next stop will probably be to find a two-turn race for him somewhere. That’s what I think he’s looking for.”

Purchased by Cash is King’s Charles Zacney for $25,000 in the Fasig-Tipton Midlantic Eastern Fall yearling sale, Monday Morning Qb is the first stakes winner for freshman sire Imagining, who stands at Anchor and Hope Farm in Port Deposit, Md. The colt is the only live foal to date for his dam How My Heart Works, who was bred last spring to Nyquist.

A winning daughter of Not For Love out of Formalities Aside (by Awesome Again), How My Heart Works is a full sister to stakes-placed If Not For Her, and a half-sister to 2014 Maryland-bred champion older mare Awesome Flower, a six-time stakes winner and earner of $556,593, and graded stakes-placed First Mondays, a $450,000 Fasig-Tipton Midlantic fall yearling. Monday Morning Qb’s third dam, stakes winner Well Dressed (by Notebook) is the dam of four stakes horses, led by Dubai World Cup-G1 winner Well Armed, graded winner Witty, and Travers Stakes-G1-placed Helsinki. She is also the granddam of Grade 1 winner American Patriot.