Artful Splatter rises above the rest in Geisha

Making her stakes debut in the 47th running of the $75,000 Geisha Stakes, Artful Splatter managed a gate-to-wire win over 10-time stakes winner and heavy favorite Anna’s Bandit on Saturday, Jan. 18 at Laurel Park. 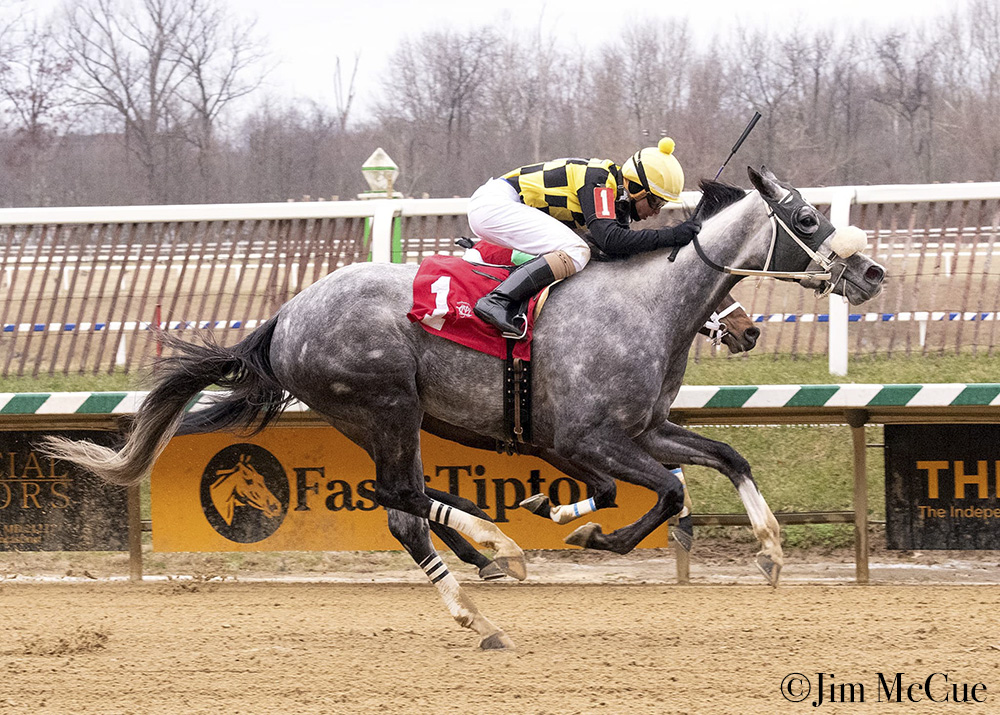 Starting amongst a talented field of competitors, James C. Wolf’s Artful Splatter broke from the rail and hustled to the lead, setting the opening quarter-mile in :23.96 and half-mile in :47.77. Multiple stakes winner Limited View flanked the gray filly through the far turn, as Anna’s Bandit and stakes-placed No Mo Lady picked up the pace from behind. The pack spread wide as they rounded the final turn, with Anna’s Bandit shifting out to catch Artful Splatter’s four-length lead. When Artful Splatter swerved out down the stretch, Anna’s Bandit had to alter course, dug in and finished a half-length behind the winner at the wire. Final time for the mile was 1:39.46.

Despite objections from Anna’s Bandit’s jockey Xavier Perez and trainer Jerry Robb and a steward’s inquiry, the order of finish stood.

“I feel like I had a ton of horse. My filly was moving very well,” Artful Splatter’s jockey Alex Cintron said. “I hit her once and when I went to hit her a second time, she went out so quick and moved out a couple paths but thank God we were clear enough to not bother the other horse. I know I crossed right in front of the other horse, but I don’t think I cost her momentum. As soon as she felt the other horse coming, she kept fighting.”

The Geisha is the 4-year-old filly’s fourth consecutive win since being claimed by Wolf and trainer Kieron Magee for $16,000 last September and moved to the dirt. Bred by Ann Biggs Jackson, Artful Splatter has improved her record to 5-3-2 from 15 starts, with $154,711 in earnings.

Purchased as a yearling for $16,000 by Hillwood Stable at the 2017 Fasig-Tipton Midlantic Eastern Fall sale, Artful Splatter is a daughter of Bandbox out of the Not For Love mare Barouchka. The broodmare has produced a family of winners, with all five foals of racing age having started and won, including 2019 Maryland Million Sprint winner Taco Supream and stakes-placed $372,819-earner Renaissance Rosie. Barouchka currently has a yearling filly by Great Notion.