Three Diamonds Farm’s Field Pass squeezed past rivals in deep stretch to capture his first stakes in the $100,000 Dania Beach, for 3-year-olds on the turf, at Gulfstream Park on Saturday, Feb. 1. 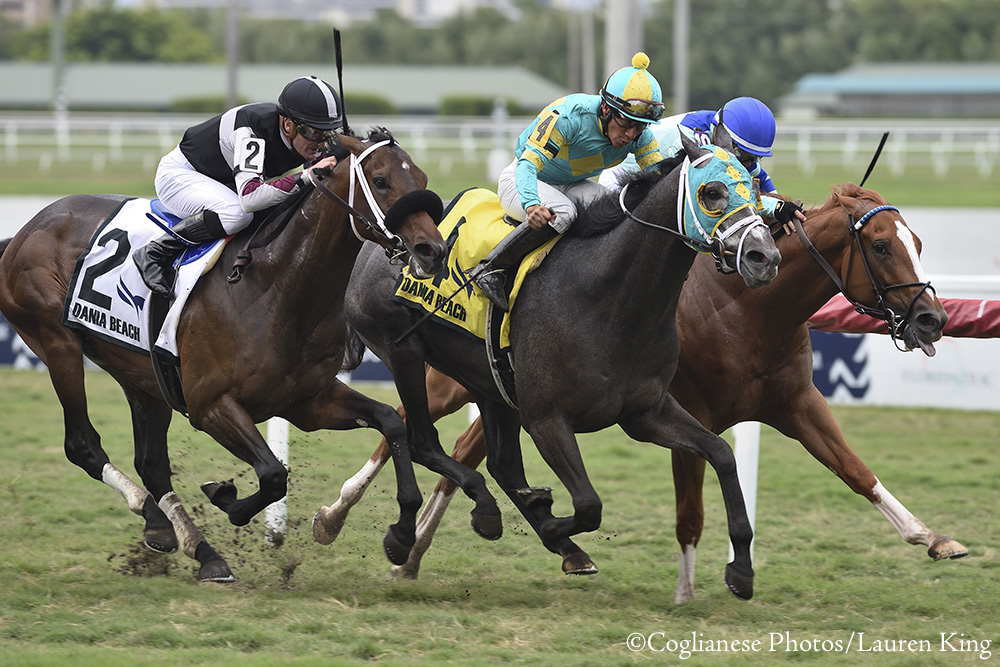 Coming off of a three-month break to make his 2020 debut, Field Pass settled mid-pack as Get Smokin moved up to take the early lead. As they hit the half-mile mark, Field Pass began to make his move between Mr. Kringle, sitting in third to the outside, and Dominate Themoment, in fourth to the inside. Get Smokin led the field through the final turn, with South Bend firing down the stretch as Field Pass moved up the inside. The Michael Maker trainee slipped between his foes in deep stretch to hit the wire a neck ahead of Get Smokin and finish the mile on a turf course rated good in 1:38.81.

It was the gray colt’s fourth stakes attempt. In his stakes debut in the With Anticipation-G3 at Saratoga last August he finished second, beaten a length, and also accounted for fourth-place finishes in the Dixiana Bourbon-G3 at Keeneland and Laurel Futurity at Laurel Park. Adding to his maiden win at Saratoga in July, his second career start, Field Pass bumped his record to 2-2-0 from seven starts and increased his earnings to $174,650.

A son of Lemon Drop Kid, Field Pass was bred by New Jersey resident Mark Brown Grier, foaled at Dance Forth at Roland Farm in Warwick, and consigned by Becky Davis as a yearling to the 2018 Fasig-Tipton Midlantic Eastern Fall sale, where he was purchased for $37,000 by Owls Bloodstock. His dam Only Me, a daughter of Runaway Groom, has two named foals. Both are winners.