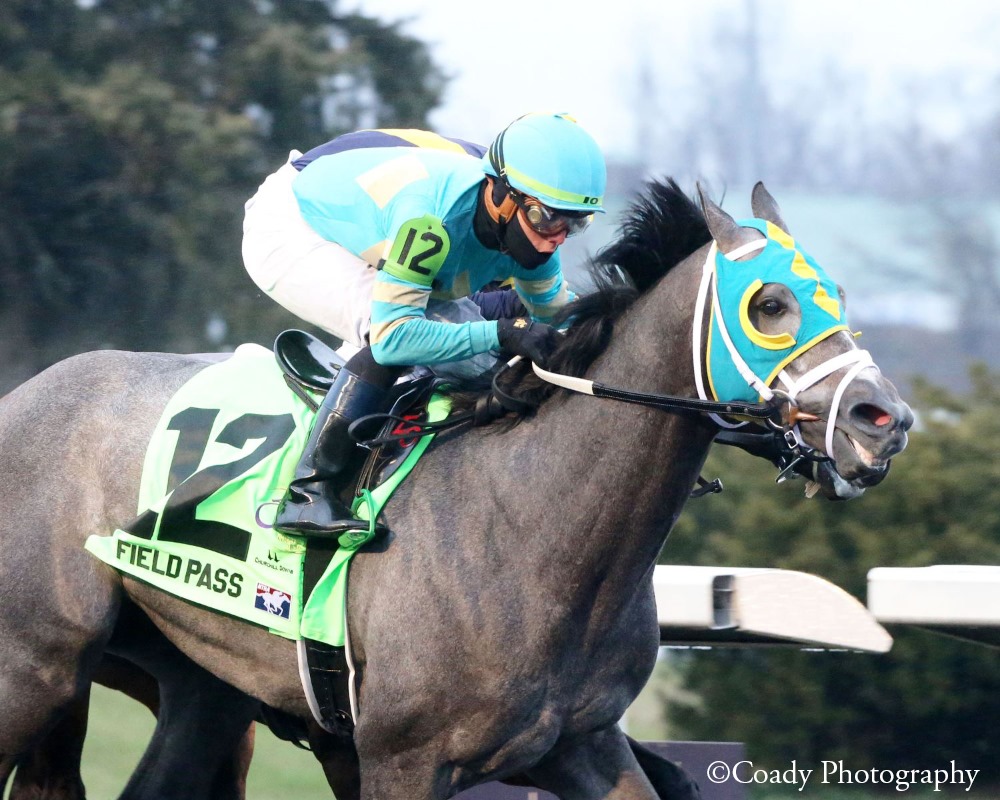 Breaking from the outside of an 11-horse field, Field Pass worked quickly to settle into third position as fellow Michael J. Maker trainee Fancy Liquor set the first quarter-mile in :23.76, half-mile in :47.78, and six furlongs in 1:11.72, with favored Invader in third. Stalking the leading pair from the outside as they battled down the stretch, Field Pass rallied to hit the wire a neck ahead of Invader, with Fancy Liquor two lengths behind in third. The longest distance he’s run so far, Field Pass finished the mile and an eighth in 1:49.34 over Turfway’s all-weather track.

Field Pass kicked off his 3-year-old season last month with his first stakes win in the Dania Beach at Gulfstream Park, beating out graded stakes placed Get Smokin by a neck.

“I try to bring some of my better turf horses for the Ruby. It’s paid off over the years. He ran a great race off the bench in the Dania Beach in a very competitive field and I thought he would run very well here. He’s a good-sized horse. His conformation’s great. Great mind on him,” said Maker.

Field Pass’ prior starts include a second-place finish in last year’s With Anticipation Stakes-G3 at Saratoga and a fourth in the Bourbon Stakes-G3 at Keeneland. Field Pass has improved his record to 3-2-0 from eight career starts, with $291,210 earned.

Bred by Mark Brown Grier, Field Pass was consigned by Becky Davis as a yearling in the 2018 Midlantic Eastern Fall sale and purchased for $37,000 by Owls Bloodstock. The colt is a son of Lemon Drop Kid and one of three foals produced by the Runaway Groom mare Only Me. You Must Chill, her only other foal to race, is an allowance winner.

The Jeff Ruby Steaks awards points toward the Kentucky Derby-G1, recently rescheduled to September 5 due to the coronavirus outbreak, with 20 going to Field Pass. Although not an initial nominee to the Triple Crown, paying the late nomination fee of $6,000 by March 30 would secure the colt a chance to pursue a position in the Kentucky Derby.