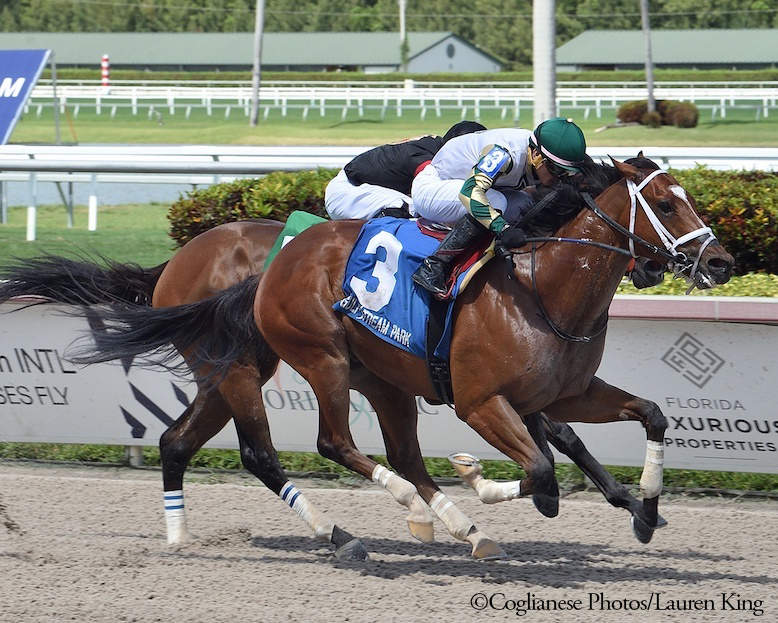 The Kathy Ritvo trained gelding was second in his 3-year-old debut, an eventful Gulfstream allowance against older horses on April 26 in which he was forced to avoid a loose horse. The second choice of six starters in the Roar, he raced just off the leaders in fourth through early fractions of :22.39 and :45.19 and made his move around the final turn. Sent to the outside of heavy favorite Green Light Go, after six furlongs in 1:09.99, he turned back the challenge of that rival and hit the wire a half-length in front. Final time for the six and a half furlongs was 1:16.57.

“He’s coming along and doing well,” Ritvo said. “We were just hoping he’d run to how he was training. He’s been doing so good. It was a big improvement last time and I’m not really sure he loved the mud, but he still ran good. He just loves to run.” Double Crown has now earned $83,865 in three starts.

Bred by Dr. and Mrs. Thomas Bowman and Rebecca Davis, Double Crown was one of two horses purchased privately by Reeves Thoroughbred Racing out of a maiden special weight at Laurel Park last September. Double Crown was the winner that day; finishing second was another first-time starter, Ournationonparade, who captured the Maryland Million Nursery in his next start and earlier this year finished third in the Hutcheson. Also a starter in the Roar, Ournationonparade wound up fourth.

From the first crop of Anchor and Hope Farm’s Bourbon Courage, Double Crown is the second open stakes winner for his sire, and first for his dam Two Columbus. A winning daughter of Two Punch also bred by the Bowmans and Davis, Two Columbus has produced five foals, with three winners from four starters, including One Two Three Go (by Hunters Bay) who has earned $108,749.