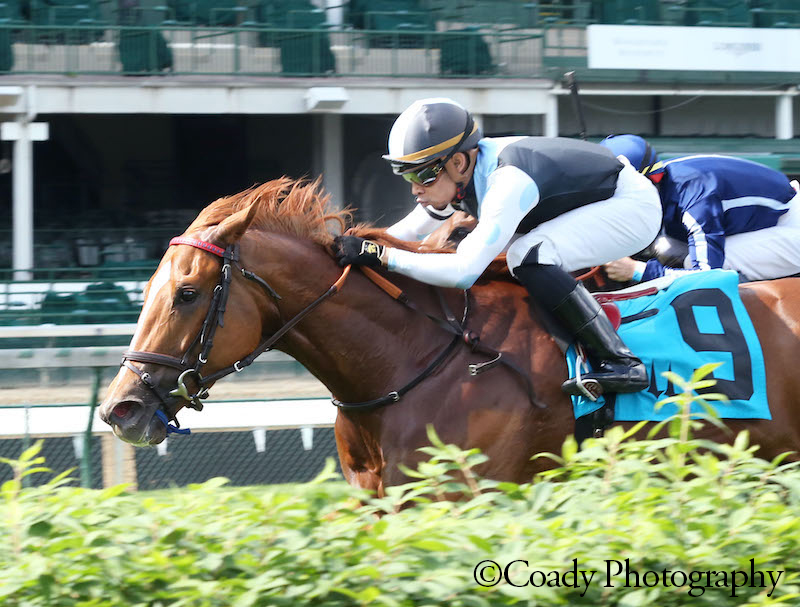 Nearly seven months after her phenomenal victory in the $1,000,000 Breeders’ Cup Juvenile Fillies Turf-G1, her second stakes win and first graded, Sharing broke straight to the front and settled into fourth as In Good Spirits led the field of 13 through opening fractions of :24.16 and :48.39. Moving up on the outside of Walk In Marrakesh and In Good Spirits heading into the final turn, Sharing outlasted a late challenge from fellow Breeders’ Cup competitor Abscond down the stretch to win by a half-length. The Graham Motion trainee finished the mile on the turf in 1:36.26, adding a third stakes victory to her record and improving to 4-0-1 from 5 starts as she increased her earnings to $787,340.

“It’s great seeing her back to her form from last year,” her jockey Manuel Franco said. “She’s very classy but it makes your job easier when you have nice horses underneath you.”

Finishing third in her debut at Saratoga last July, Sharing broke her maiden a month later in a seven-furlong off-the-turf maiden special weight at Saratoga, winning by six and a quarter lengths. Her victorious stakes debut in the $200,000 Selima Stakes at Laurel Park in September served as the final preparation before her Breeders’ Cup run.

A daughter of Speightstown bred by Sagamore Farm, Sharing is out of the Breeders’ Cup Filly and Mare Turf-G1 winner Shared Account, who is a daughter of Breeders’ Cup Classic-G1 winner Pleasantly Perfect. The mare has produced five foals, with three winners from four starters, including Sagamore-bred stakes winner Riley’s Choice and stakes placed I’m Pretty Strong.

Sharing, sold as a yearling, was purchased by Eclipse Thoroughbred Partners from the consignment of Upson Downs Farm for $350,000 at the 2018 Fasig-Tipton New York Saratoga Select sale. That fall, Shared Account was sold, in foal to Mastery, for $550,000 to Sam-Son Farm at the Keeneland November Breeding Stock sale.