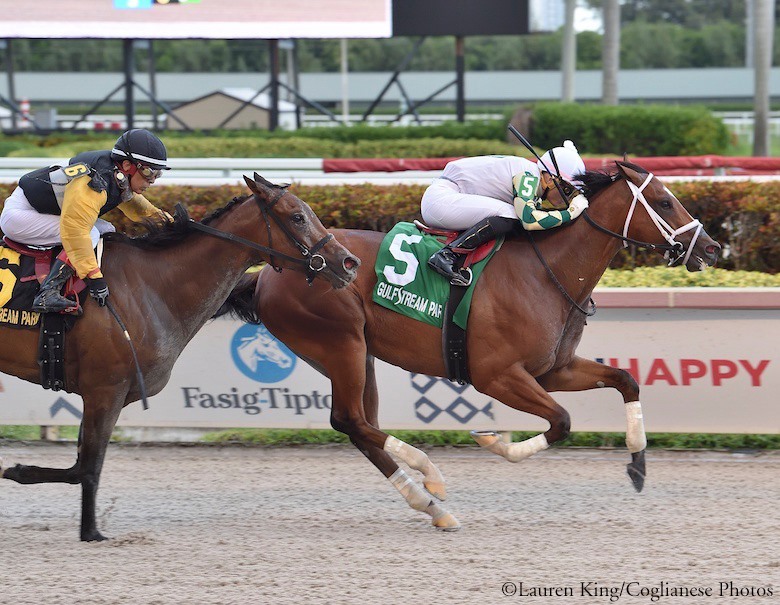 Coming off a strong win in the Roar Stakes in May, Double Crown broke quickly to the front of the pack before settling into fourth on the outside of stablemate, and fellow Maryland-bred, Ournationonparade. Off fractions of :22.59 and :45.42, Double Crown made his move to the front and continued down the stretch, outlasting a late challenge from With Verve to win by three-quarters of a length.

The Kathy Ritvo trainee finished the seven-furlong sprint in 1:22.37. The race fit as the perfect step-up from his previous start, where he captured his stakes debut in the Roar by a half-length when getting six and a half furlongs in 1:16.57.

“He’s tough. He has just enough speed to stay off the pace early and he closes well,” said Dean Reeves, who owns the 3-year-old gelding with his wife Patti.

A son of Anchor and Hope Farm’s Bourbon Courage, the bay gelding was bred by Dr. and Mrs. Thomas Bowman and Rebecca Davis. His dam Two Columbus, a daughter of Two Punch who earned $149,281, has produced five foals, with three winners from four starters. The family traces back to the marvelous producer Avie, dam of champion Lord Avie.

Read more about the Carry Back here

Country Life Farm’s Mosler, the region’s busiest stallion when he entered stud at the Pons family’s Bel Air, Md., farm in 2017, got his first winner when Heir Port scored in his debut Aug. 9 at Monmouth Park.