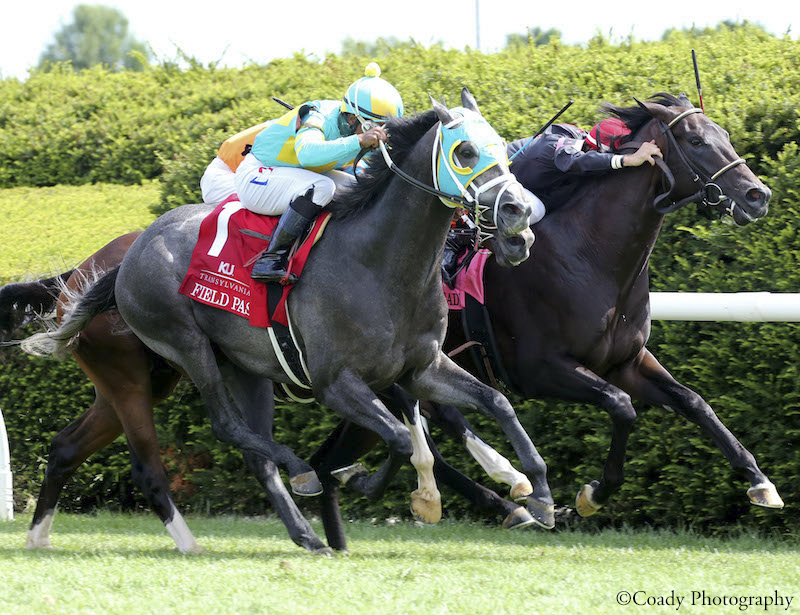 Breaking from the inside post and settling mid-pack, Field Pass advanced steadily around the far turn and burst ahead down the stretch as he dueled with Fancy Liquor and Street Ready from the outside. Victorious in a photo finish, the Michael J. Maker trainee completed the one and one-sixteenth miles in 1:42.56. The favorite in a field of 10, Field Pass paid $6.40.

“This horse loves to win. He’s all heart. As [jockey] Ricardo [Santana, Jr.] said, he never really doubted [Field Pass] would win,” said Maker. “When he thought he was getting the lead, he started kinda backing off. When he felt the pressure, he dug back in.”

The Transylvania was Field Pass’s fourth stakes victory, second graded, of the year alongside wins in the Dania Beach in February, Jeff Ruby Steaks-G3 in May and Audubon Stakes in June.

Breaking his maiden last July at Saratoga, the gray colt followed up with a second-place finish in the With Anticipation-G2, his graded stakes debut, as he finished a length behind Fighting Seabee. He rolled on with consecutive fourth-place finishes in the Laurel Futurity in September and the Dixiana Bourbon Stakes-G3 in October, his only other start at Keeneland.

Bred by Mark Brown Grier, Field Pass is a son of Lemon Drop Kid out of the Runaway Groom mare Only Me. She has produced three foals, with two winners from three starters, including Field Pass’s half-brother You Must Chill ($81,052).