Klaravich Stables’ Selflessly made every moment count in the Grade 3 Lake George as she sped down the stretch to hit the wire a nose ahead of 3-5 favorite Sweet Melania Friday, Aug. 28 at Saratoga. 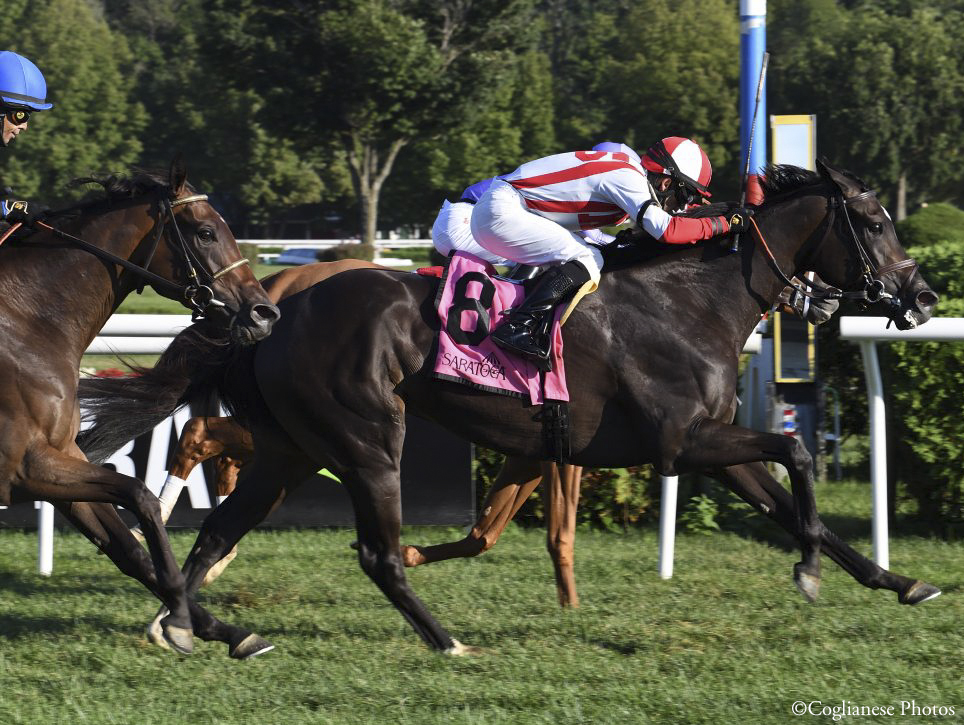 Making her third consecutive start against Sweet Melania, Selflessly settled mid-pack to bide time in fifth as early leader Windracer set an opening quarter-mile in :23.92 and half-mile in :48.48. As the field flew around the final turn, Sweet Melania found her opening on the inside and moved up to take the lead, with Selflessly charging closely behind. As they neared the wire, Selflessly challenged from the outside and managed to stick a nose in front as she finished the mile on the good turf in 1:36.06.

“My team at Belmont has had this horse all meet getting her ready and they really did a great job,” said trainer Chad Brown. “[Jockey] David [Cohen] stepped in today when Irad [Ortiz Jr.] couldn’t ride and I’m really proud of him. He rode a great race and we were happy to put him on the horse. I use him occasionally and we certainly ride against him a lot. He rides particularly well on the turf saving ground.”

Finishing second in her debut at Saratoga last August, the 3-year-old daughter of More Than Ready followed up with a three-quarter-length win in the Miss Grillo Stakes-G2 at Belmont Park the following month, breaking her maiden and securing her first graded victory all in one sweep. In November, she finished fifth in the Breeders’ Cup Juvenile Fillies Turf-G1, as fellow Maryland-bred Sharing won it and Sweet Melania finished third.

Coming off of a nearly seven-month layoff, Selflessly made her sophomore debut in the Wonder Again Stakes-G3 at Belmont in June. Stumbling at the start, she finished last in the field of five as Sweet Melania picked up her second graded win.

“The first race of the year I was a little disappointed watching the race unfold and when we got her back to the barn, she had some cuts on the backs of her legs. She missed some training after that race to heal up, so she probably had an excuse in there,” Brown said.

Now a multiple graded stakes winner, Selflessly has improved her record to 2-1-0 from five career starts, with earnings of $219,000.

Bred by George Louis Doetsch Jr., the dark bay filly is the second foal from the Grand Slam mare Uniformly Yours. The broodmare has produced five foals – both her starters stakes performers. Her first foal is multiple stakes winner Enchanted Ghost (by Ghostzapper), who sold for $335,000 at Fasig-Tipton Kentucky’s Fall Mixed sale last year. Uniformly Yours has the 2-year-old filly Honor Yours (Honor Code), sold for $100,000 at the 2019 Keeneland September sale; a yearling colt by Kitten’s Joy, who brought $500,000 as a weanling at last year’s Keeneland November sale; and a weanling colt by Kitten’s Joy. Selflessly was purchased as a weanling for $190,000 by De Meric Stables, agent, out of the 2017 Keeneland November Breeding Stock sale.

Uniformly Yours was bred to More Than Ready for 2021.