Sharing all class in Grade 2 Edgewood 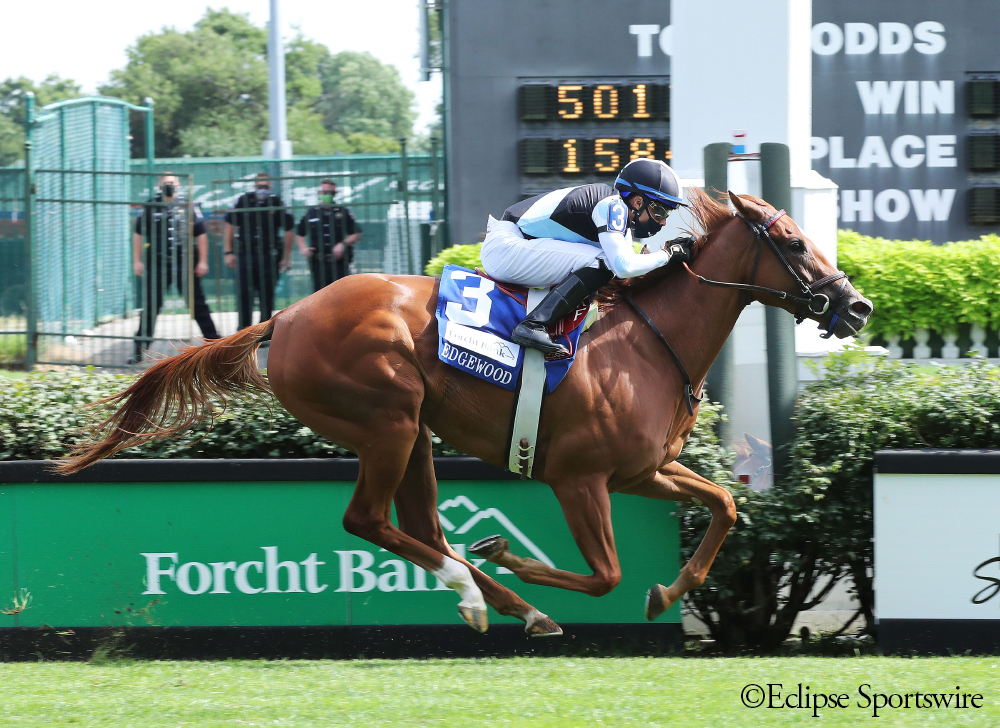 Making her first start stateside since finishing second in the Coronation Stakes-G1 at Royal Ascot in June, Sharing settled into second as she shadowed early leader In Good Spirits, who took the field through opening fractions of :24.44 and :48.76. As the 3-year-old fillies turned for home, Sharing took over the lead while Hendy Woods made a late bid, to no avail. The Graham Motion trainee won by one and a quarter lengths, finishing the mile on the “good” turf in 1:36.87.

“I can’t lie, I was pretty anxious about it because she was coming off a long trip and a long break,” said Motion. “But she’s so classy, she makes us all look good I think. She had a great work last weekend and jockey Manny [Franco] gave her a perfect ride. It couldn’t have set up any better quite honestly.”

The daughter of Speightstown added a second graded/group stakes victory to her 2020 record, and improved to 5-1-1 from seven career starts. The winner’s share of $182,280 boosted her to millionaire status with $1,038,751 in overall earnings.

Sharing hasn’t slowed down since breaking her maiden in her second career start at Saratoga last August. The filly won her stakes debut in the Selima at Laurel Park a month later, and followed up with a stylish victory in the Breeders’ Cup Juvenile Fillies Turf-G1 in November at Santa Anita. Despite odds of 13-1 in the field of 14, Sharing gained the lead in deep stretch to hit the wire one and a quarter lengths ahead of Daahyeh (GB), finishing the mile on the turf in 1:34.59. The performance emulated that of her dam Shared Account in the 2010 Breeders’ Cup Filly and Mare Turf-G1, which she won by a neck at 46-1.

After a six-month layoff, Sharing returned to kick off her 3-year-old season with a win in the Tepin Stakes at Churchill Downs in May, which served as the perfect prep for her trip across the pond to Royal Ascot. The Breeders’ Cup winner finished just four and a quarter lengths behind Alpine Star in the Coronation June 20.

“The only question I have in my mind is how far she wants to go,” said Motion. “She obviously loves this distance. The next race would be one and one-eighth miles if we go to the [Queen Elizabeth II Challenge Cup-G1] at Keeneland. I don’t know if she wants to go that far, I don’t know why she wouldn’t, but she seems awfully good going a mile.”

Bred by Sagamore Farm, Sharing is the fourth foal out of Shared Account. Of the mare’s four foals of racing age she has additional winners Riley’s Choice, who captured the 2018 All Brandy Stakes at Laurel, and stakes-placed I’m Pretty Strong. Shared Account was sold for $550,000, in foal to Mastery, at the 2018 Keeneland November Breeding Stock sale to Sam-Son Farm.

Crowned 2019 Maryland-bred Horse of the Year, champion 2-year-old filly and turf runner, Sharing was purchased for $350,000 by Eclipse Thoroughbred Partners as a yearling at the 2018 Fasig-Tipton New York Saratoga Select Yearling sale.