James C. Wolf’s Artful Splatter achieved victory with ease as she led gate-to-wire in the $75,000 George Rosenberger Memorial, the fourth of six stakes on the Saturday, Sept. 26 Owners Day card at Delaware Park. 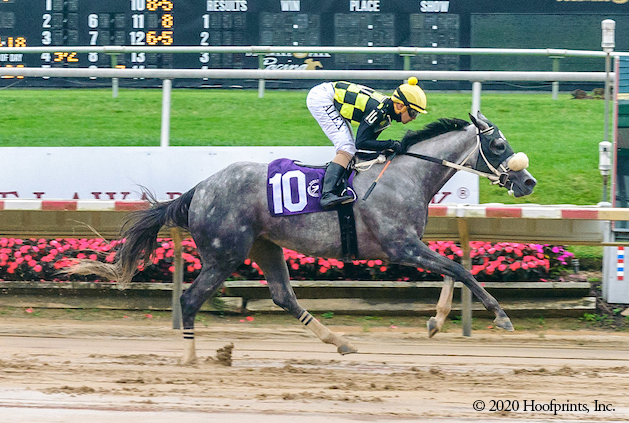 Coming in off of a second-place finish in Laurel Park’s Twixt Stakes earlier in the month, Artful Splatter went quickly to the lead, posted an opening quarter-mile of :24.62 and a half in :49.19 as the rest of the field trailed well behind. The only gray amongst bays, Artful Splatter widened her lead down the stretch to hit the wire 10 1/4 lengths ahead of Ujjayi. The Kieron Magee trainee finished the one and one-sixteenth miles on a sloppy track, originally scheduled for the turf, in 1:44.89.

Making her career debut and one other start late in 2018, Artful Splatter returned in January for her 3-year-old season and broke her maiden in her third career start by two lengths. Finishing out the year with a three-win streak, the 4-year-old daughter of Bandbox kicked off 2020 by winning her stakes debut in the Geisha by a half-length. She has since picked up a couple allowance wins and finished second in the Twixt to improve her record to 8-4-3 from 23 starts for earnings of $295,428.

Bred by Ann Biggs Jackson, the filly was purchased for $16,000 as a yearling by Hillwood Stable at the 2017 Fasig-Tipton Midlantic Eastern Fall sale. She was later claimed for $16,000 out of her 11th career start (last September) by her current connections.

Artful Splatter’s dam Barouchka, a daughter of Not For Love, has produced six foals – all five of racing age are winners, including Maryland Million Sprint Handicap winner and $338,829-earner Taco Supream and 15-time winner and stakes-placed Renaissance Rosie, her richest earner with $372,819. Barouchka has a yearling filly by Great Notion and was bred to Bourbon Courage for 2021.