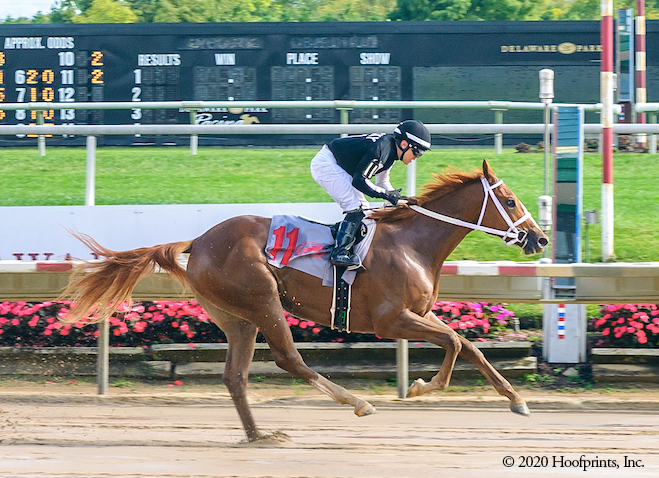 Street Lute broke from the outside post and immediately took charge, guiding the field through an opening quarter mile in :21.88 and half in :46.54. Unfazed by the sloppy track, the chestnut daughter of Street Magician blew down the stretch to hit the wire five lengths ahead of Plane Drunk, finishing the five and a half furlongs in 1:05.36.

The stakes win came less than three weeks after her career debut, when she broke her maiden by a length in a $40,000 maiden special weight. Trained by John J. Robb, Street Lute now has earnings of $90,000.

“We had a great trip,” said jockey Brian Pedroza. “I loved having the outside post, we broke well and I kept her in the clear. After that, I just let her do her thing. I really did not expect anything less of her today. I thought she was the best horse going in, she is the best 2-year-old I have sat on all meet, and she performed like it.”

Bred by Dr. and Mrs. Thomas Bowman and Dr. Brooke Bowman, the daughter of Street Magician was purchased by Robb as a yearling for $10,500 at last year’s Fasig-Tipton Midlantic Eastern Fall sale. Street Lute is the second foal produced by her dam Alottalute, a daughter of Midnight Lute who had an Editorial colt in 2019 and delivered a filly by Street Magician this past May.