Singlino towers above others in First State Dash Stakes

John E. Worsley’s Singlino makes his presence felt wherever he goes. Somehow the 17-hand son of first-year sire Uncle Lino was overlooked at Delaware Park on Saturday, Sept. 26, when he scored in the $100,000 First State Dash Stakes for 2-year-olds as part of the track’s special Owners Day card. He won his stakes debut by two lengths and paid $19.40 for the win as the fourth choice in the field of 10. 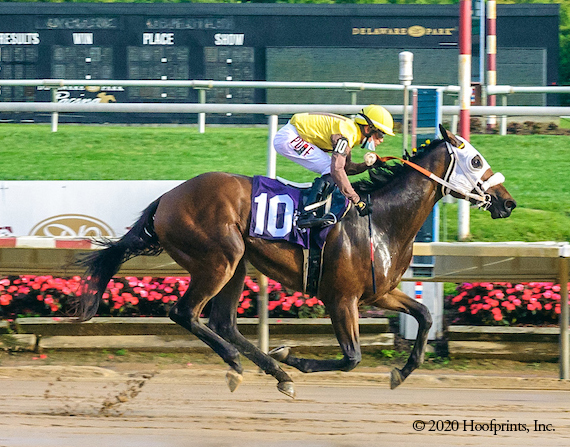 “I have always been really excited about this horse,” said winning rider Alexander Crispin. “The first time I rode him, we won. He got a little break, but when he first came back to the track, he worked really good and he progressed with each day. In the mornings, every time I would get him on, he felt better. I had faith and hope when he did race next, he would do well and today he did. Everything came together today and it went as planned.”

Trained by his owner at Delaware Park and making each of his three starts at the Wilmington track, Singlino finished fourth in his debut June 20 before breaking his maiden a month later in a $25,000 waiver maiden claimer (no tag) by seven and a half lengths. With his win in the First State Dash he boosted his earnings to $80,625.

Bred by Sycamore Hall Thoroughbreds, the gelding is the first stakes winner for Northview Stallion Station’s Uncle Lino. Singlino is one of four winners from five foals of racing age for the unraced Smoke Glacken mare Signaling, who is also the dam of $315,890-earner Hammerin Aamer (by Jump Start). Second dam Blushing Broad produced multiple stakes winner Love’s Blush (dam of graded winner Beach View) and is a full sister to graded winner Brushing Gloom and a half-sister to four-time stakes winner and $624,194-earner Clash by Night.

Signaling’s youngest foal is a yearling filly by Great Notion.