A Great Time scores first stakes victory in The Very One

Preakness week was immensely productive for longtime regional breeder R. Larry Johnson. On Saturday, his homebred filly Never Enough Time scored in the $100,000 Skipat Stakes and No Mo Lady, whom he bred and now co-owns with R.D.M. Racing Stable, finished third in the $150,000 Gallorette Stakes-G3. Kicking off the stakes action was homebred A Great Time in the $100,000 The Very One Stakes on Thursday, Oct. 1. The 6-year-old mare put forth a huge effort to record her first stakes victory by a length on a yielding Pimlico turf course. 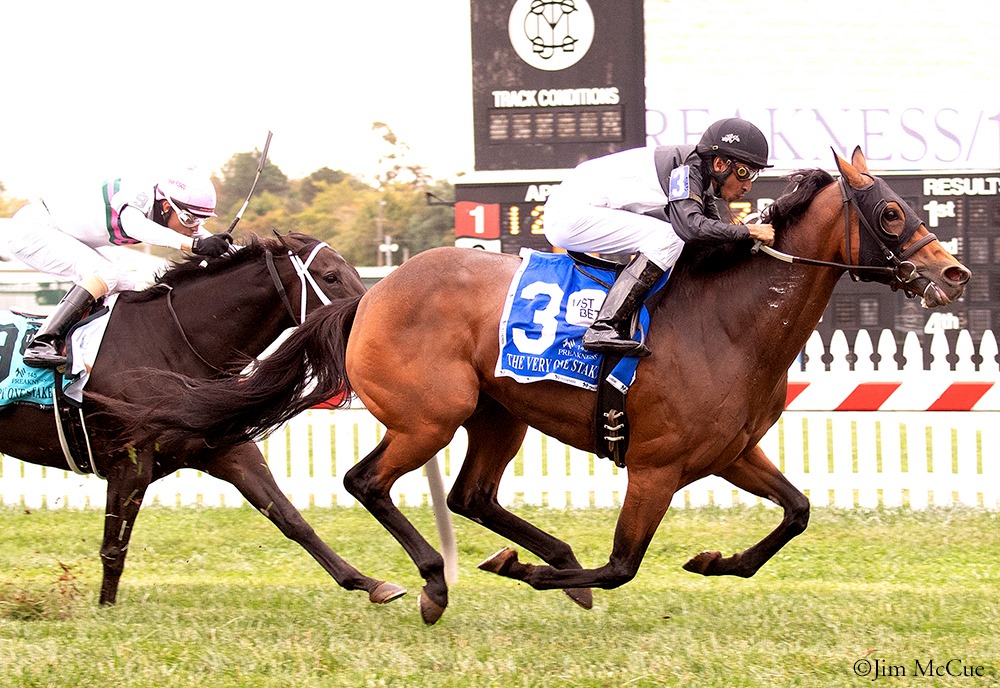 Coming in off an allowance win 17 days earlier at Presque Isle Downs, A Great Time bumped Giggling at the break and drifted to the back of the pack, more than 15 lengths behind, as Giggling set sail through an opening quarter-mile in :22.24 and a half in :47.30. Finding a clear path as she took aim at the field down the stretch, A Great Time had the final say as she burst ahead from the outside to hit the wire a length better than Mr. Al’s Gal. The Mike Trombetta trainee completed the five furlongs in 1:00.14.

“We didn’t know she would handle it this well,” Trombetta said. “This is huge, because she was multiple stakes placed but to make her stakes winner is important. It came at the right time.”

A Great Time boosted her record to 4-5-3 from 19 career starts and $223,512 in earnings. She won her debut at 2 at Laurel Park, and early in her 3-year-old season was facing graded stakes competition at Gulfstream Park, her best finish a fourth in the Ginger Brew Stakes in her stakes debut. Off for more than a year, she ran exclusively in allowance company on her return, from Laurel to Saratoga to Woodbine, and finally got her second win in a Gulfstream Park allowance in February 2019.

Away from the races for nearly five months, she earned black type next out when second in the Jameela Stakes, her third and final start of the year. She hasn’t been off the board in 2020 – along with her two wins, she has two thirds, in the License Fee Stakes at Belmont Park and a Laurel allowance.

The newly minted stakes winner is a daughter of Johnson’s homebred Street Cry (Ire) stallion Street Magician, who stands at Legacy Farm Stallions at Roland Farm in Warwick, Md. A Great Time is the 10th and final foal for graded stakes-placed Short Time, a daughter of Clever Trick who was 22 when she delivered A Great Time in 2014. The mare’s earlier foals included two graded stakes performers: Grade 1 winner and $762,021-earner Victor’s Cry, a son of Street Cry (Ire), and Grade 3-placed filly Clever Strike (by Smart Strike).

Read more about the The Very One here