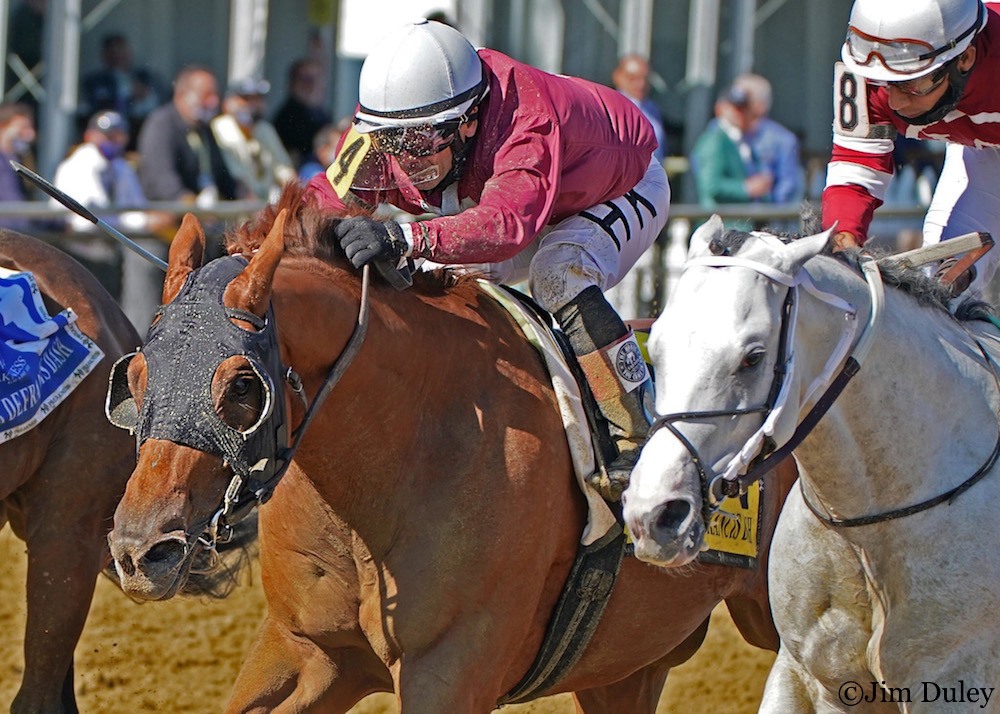 Making his third stakes start this year, Laki broke between horses before settling in the fifth spot as longshot Krsto Skye led through a quarter in :22.96 and a half in :45.03. Checked in tight quarters between horses leaving the backstretch, Laki circled the turn four deep and closed steadily on the outside down the stretch, getting up in the final strides to win by a nose over late-running Maryland-bred Eastern Bay, with Nitrous another nose back the three-horse photo. Sent off as the fifth choice in the field of six, Laki ran the six furlongs in 1:09.70.

“It was unbelievably exciting. Everyone was hollering like it was a full house, like a May Preakness. It means the world to me,” said Dilodovico. “The owner gives him a lot of time. When we want to give him time, the owner [Buck Kalinowski of Hillside Equestrian Meadows] takes him home, takes good care of him and sends him back to us in good shape.”

Laki has been close to breaking through in graded company before, with a second in the 2018 De Francis Dash and a third in the 2019 General George Stakes-G3. In his career of 28 starts, he has 10 wins, six of them stakes, with six seconds and five thirds. A two-time MATCH Series division winner (3-Year-Olds and Up Sprint-Dirt Division in 2018-2019) he now has earnings of $683,662.

Debuting as a 3-year-old in 2016, the hard-knocking chestnut gelding has won a stakes nearly each year he’s raced, first taking the Not For Love in 2017, followed by the Polynesian and Howard and Sondra Bender Memorial in 2018, the Frank Whiteley Jr. in 2019 and the Oceanport Centennial this past July. He led into the De Francis Dash with a second-place finish to Eastern Bay in Laurel’s Polynesian in September.

Bred by Tom Michaels and Lorna Baker, Laki is a son of Cuba out of Truthful Dutch (by Swear by Dixie) and is his dam’s only winner from three starters. Truthful Dutch produced six foals, her most recent now 2, a full sister to Laki named Haila who has yet to start.