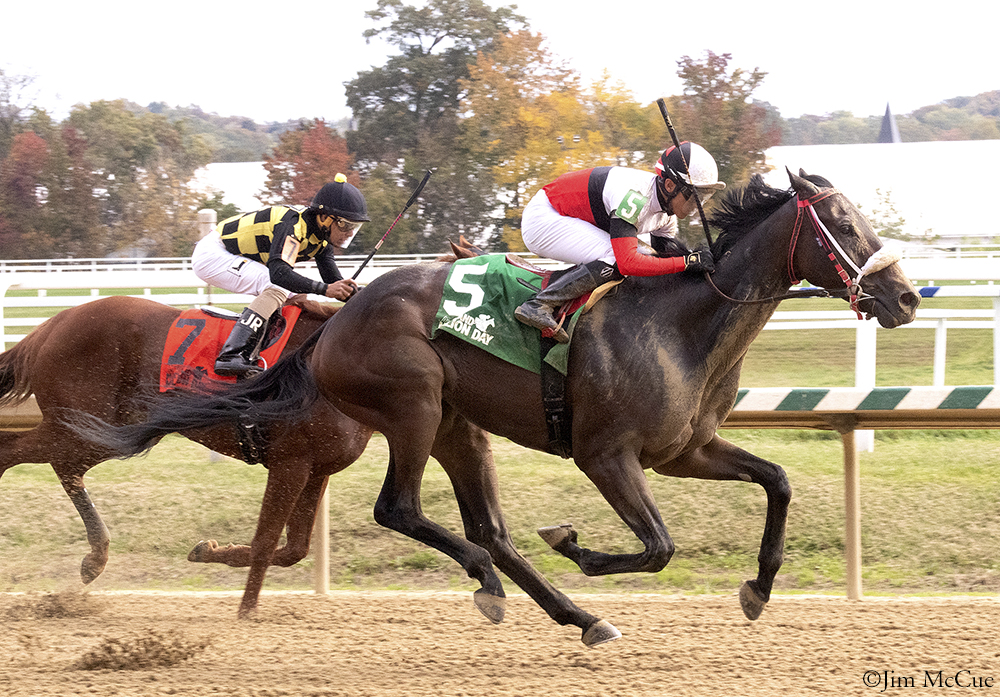 Making his stakes debut, and his first start for owner R D B Services and trainer Ricardo D’Angelo, who claimed him for $5,000 just two weeks prior to the Maryland Million, Glengar ran at the back of the pack as Rip Rap Riley and odds-on favorite V. I. P. Code dueled stride-for-stride through an opening quarter-mile in :23.26 and half in :45.97. Crush It moved up around the final turn to challenge the leading pair from the outside, as Glengar gained momentum down the center of the track and sped to the wire to win by a length and a half over V.I.P. Code, with Crush It holding third. The final time for the seven furlongs was 1:23.53.

Debuting as a 3-year-old for breeder Henry S. Clark III and trainer Kieron Magee, Glengar broke his maiden that November in his third start and was promptly claimed by trainer Claudio Gonzalez for owner Joseph E. Besecker for $25,000. After making four starts for his new connections, finishing second twice, Glengar was sold during the Besecker dispersal at the 2019 Fasig-Tipton December Mixed sale; Clark and Magee bought him back for $10,500.

The 5-year-old gelding made eight starts for his original connections in 2020, finding the winner’s circle twice over the summer at Delaware Park, before they lost him at Laurel on Oct. 9.

A son of the the former Maryland sire Freedom Child, Glengar is the only starter from two foals – born seven years apart – for his winning dam Lusby, a Clark homebred by Northern Wolf.

MCA Racing Stable’s Harpers First Ride, winner of the Pimlico Special-G3 in October, lived up to his favoritism in the $100,000 Richard W. Small Stakes as he swept around the turn and down the stretch to win easily by three lengths Saturday, Nov. 28 at Laurel Park.

Keeping the momentum going from her romp in the Maryland Million Distaff last month, Hello Beautiful took the lead around the final turn and moved down the stretch with ease to take the $100,000 Safely Kept Stakes at Laurel Park Saturday, Nov. 28.