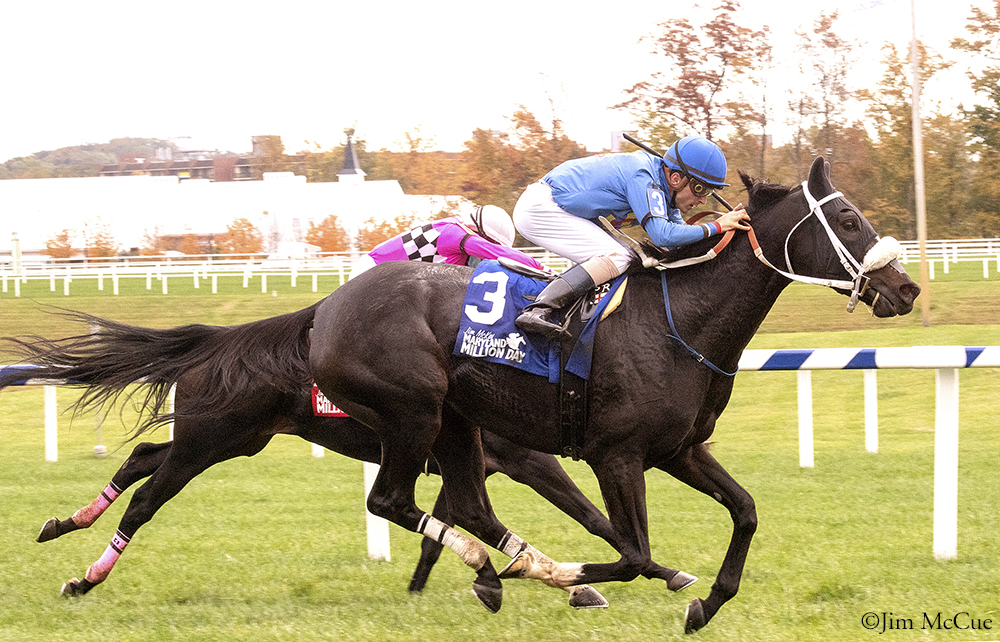 Making her second consecutive start in the Turf Distaff Starter Handicap, Jumpstartmyheart (3-1) settled to the back of the pack, just ahead of Brushing, as favorite Firth led through an opening quarter-mile in :23.48 and a half in :48.28 over a turf course rated “good.” As Firth hit three-quarters of a mile in 1:13.73, Jumpstartmyheart moved up the outside and blew down the stretch past the dueling pair of Firth and Polished Gal to outlast a late inside run from Brushing, winning by a half-length.

The 6-year-old mare ridden by Sheldon Russell finished the mile and an eighth in 1:54.35, redeeming herself from a third-place finish in last year’s running and boosting her record to 5-1-2 from 24 career starts and earnings of $113,668. She boosted trainer Dale Capuano’s lead among Maryland Million-winning trainers to 12 wins, two ahead of King T. Leatherbury.

Making her career debut in the fall of her 2-year-old season, Jumpstartmyheart broke her maiden the following summer by a nose in her seventh start, running at a mile on the turf. Two starts later, she was claimed by her current owner for $16,000. She has since collected three more wins, all at the claiming level, including one at Colonial Downs in September 2019- her only start outside of Laurel Park. She became eligible for the 2020 Turf Distaff Starter when risked for a $12,500 tag in her first start of the year in June, where she finished fourth behind Firth. The Maryland-bred daughter of Jump Start then made her first allowance starts, and although finishing off the board in both, she went off as the second choice in the field of nine.