Gregory Wilson’s Beltway Bob worked his way from the back of the pack to take the lead down the stretch and win the $50,000 Maryland Million Turf Starter Handicap going away at odds of 20-1 on Saturday, Oct. 24 at Laurel Park. 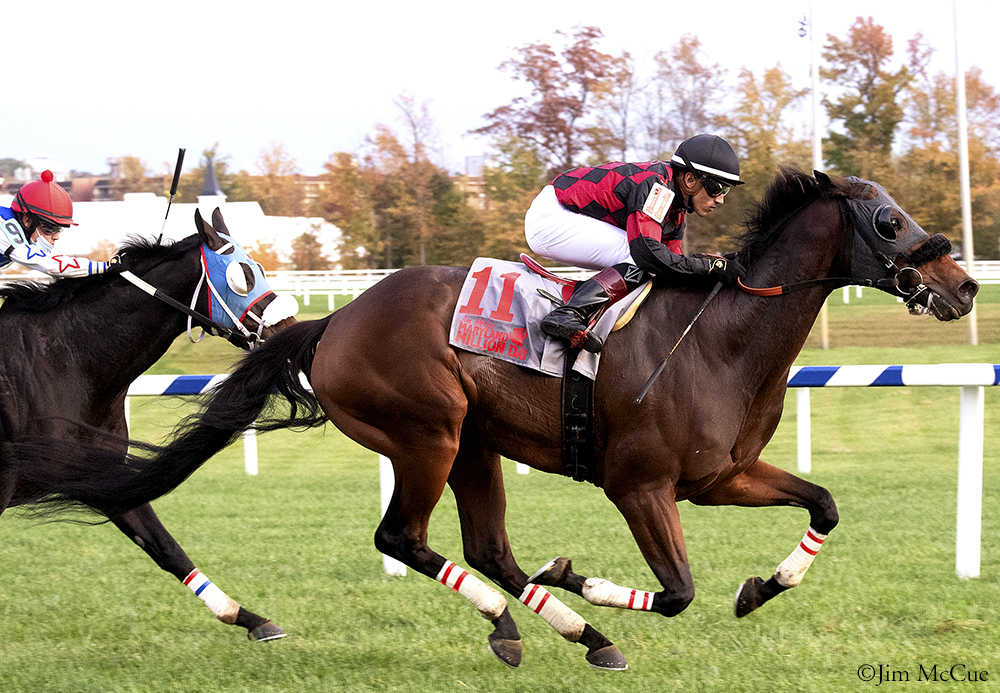 Making his stakes debut in his 36th career start, Beltway Bob was 21 lengths back as 115-1 longshot Kamehameha set the pace through a quarter-mile in :23.48. Favorite Belfour took over and got the half in :47.68 and three-quarters in 1:13.53 before dropping back to finish last. Air Token took the lead around the final turn as Beltway Bob was making a sweeping seven-wide move and took aim at the new leader. Beltway Bob rolled home to score by a length and a quarter for a final time 1:53.90 for the mile and an eighth over a turf course rated good.

Owned and trained throughout his career by Wilson, Beltway Bob ran twice at 2, but didn’t break his maiden until his sixth start at 3 in a $25,000 maiden claimer. Making all of his starts at Laurel, at the claiming and allowance levels, the gelding now has a record of 6-5-3 with $175,469 in earnings.

Beltway Bob is the seventh foal out of his dam Freeway Fun, a daughter of Awesome Again owned by Robert Gerczak who was bred exclusively to Baltimore Bob from 2013 to 2019. The mare has a total of nine foals of racing age – of her eight starters, five are winners. Her four other Baltimore Bob offspring include current 3-year-old filly Hairspray, an unnamed yearling filly and a colt delivered this year. Freeway Fun was bred to Shamrock stallion Barbados for 2021.