Fiya made the move to stakes company look effortless as he flew down the stretch to win the $75,000 Maryland Million Turf Sprint Handicap for 3-year-olds and up by two and a quarter lengths Saturday, Oct. 24 at Laurel Park. 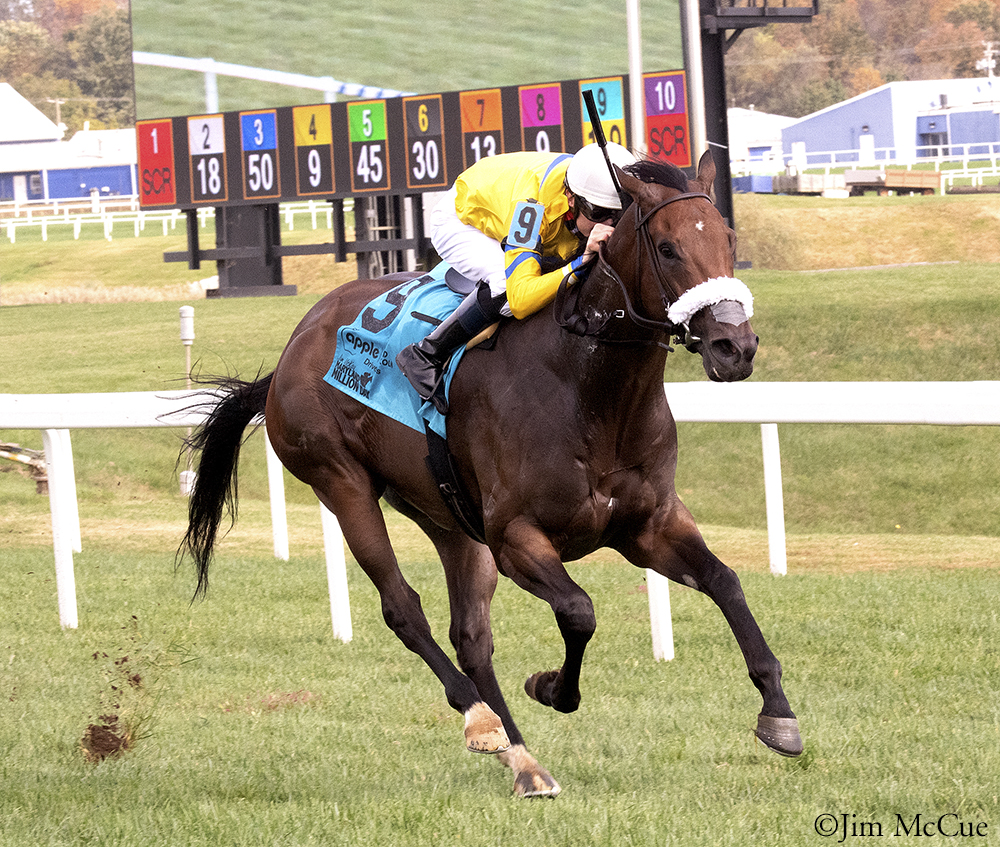 The shortest-priced winner (1-10) on a Maryland Million Day card since Steady Warrior in the 2010 Nursery, Fiya came in off three straight wins, two at the allowance level, including a dazzling score at Belmont Park last out. After a bobble at the start, Trevor McCarthy got Fiya quickly into contention, pressing early leader Grateful Bred from the outside. As they worked through an opening quarter-mile in :21.95 and made their way around the final turn over a turf course rated good, Fiya spurted away from the pacesetter, hit the half-mile mark in :45.03 and easily turned back So Street to complete the five and a half furlongs in 1:03.56.

“It looked like he got over the track well. I saw the first fraction was pretty quick and then they didn’t go super quick the second quarter,” said trainer Tom Albertrani said from his base at Belmont Park. “I thought he ran like we were hoping to see. He was able to sit off the pace and he stalked well and had something left for the end.”

The 3-year-old gelding’s first stakes victory pushed his earnings to $134,716 with a record of 4-1-1 from six career starts. Bred by Ann Merryman, Fiya made his first four starts for his breeder as he finished third and second on the dirt, respectively, before switching to the turf and breaking his maiden by five lengths in June at Laurel Park.

Stepping up to allowance company in his next start, Fiya made headlines as he rocketed to a three-length victory in 1:00.99 for five and a half furlongs on the turf, earning a 98 Beyer Speed Figure and sitting just .25 off the Exceller turf course mark set by Wet Your Whistle last April.

Less than two weeks later the son of Friesan Fire was consigned to the Wanamaker’s July Online Auction and purchased by Robert Masiello for $400,000. Fiya’s first start for his new connections was a three and a quarter-length win in a six-furlong turf allowance at Belmont Park in September. Going gate-to-wire, his time of 1:06.70 earned him a 100 Beyer Speed Figure, tying for the fastest by a 3-year-old on the grass this year.

Fiya is the only winner from two starters his dam Sista, a daughter of Two Punch. Her four foals are all by Maryland sires, including a yearling filly by Holy Boss.