Lead Off Stable’s Pretty Good Year left quite the impression as he made a huge move down the stretch to spring a 15-1 upset in the $100,000 Maryland Million Turf for 3-year-olds and up at Laurel Park Saturday, Oct. 24. 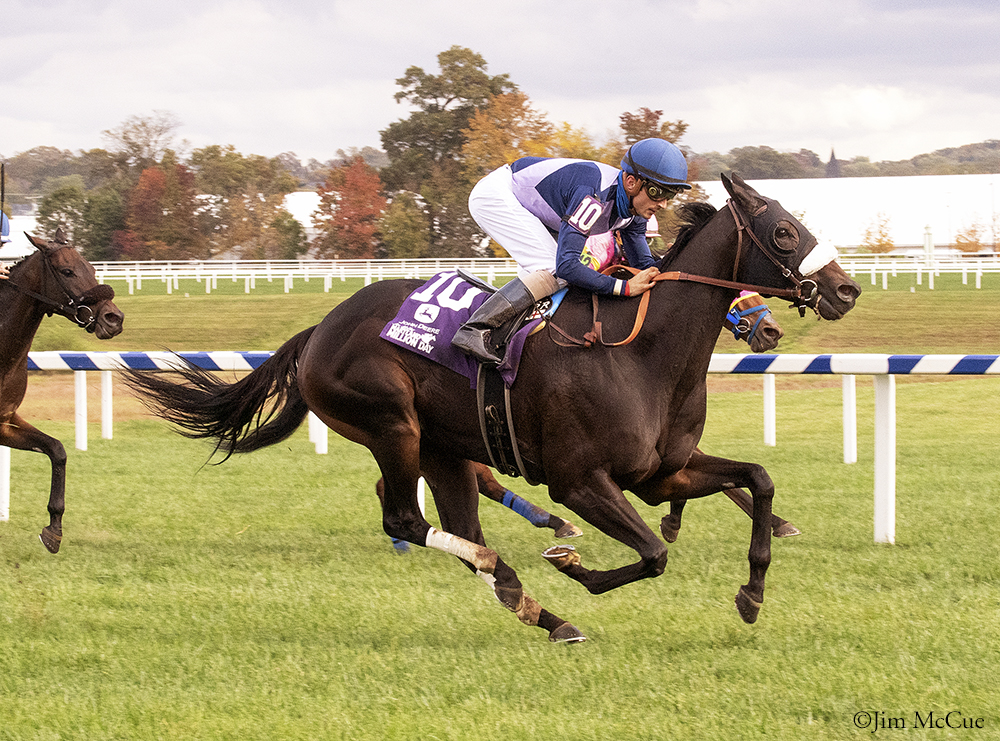 Returning to Laurel after two starts at Delaware Park in September, Pretty Good Year settled last of 12, outside of defending Turf champion Mr. d’Angelo, as Rising Perry took the field through an opening quarter-mile in :24.17 and the half in :48.46. As the field tightened up around the final turn, Pretty Good Year made his move on the outside to challenge the new leaders, the dueling pair of Cannon’s Roar and favorite Nick Papagiorgio. The Kelly Rubley trainee gained momentum down the stretch and hit the wire a length ahead of Cannon’s Roar, with Nick Papagiorgio third.

Pretty Good Year made his stakes debut in the 2019 edition of the Turf where he rallied from last to finish third, two and a quarter lengths behind winner Mr. d’Angelo and second-place finisher Somekindofmagician, who finished fourth and sixth, respectively, this year. The race was extended an extra furlong for 2020, and Pretty Good Year completed the mile and an eighth in 1:52.32 for his first grass and stakes win.

“Distance has always been his thing,” Rubley said of the 4-year-old son of Great Notion. “We keep hitting these one-turn miles here and he hits the board and he picks up checks, but the longer the better for him. At the three-eighths pole, I’m thinking, ‘Oh my God, we have a lot of horse.’ ”

After breaking his maiden on debut in January 2019 at Laurel Park, Pretty Good Year placed in five allowance races, and finished third in the Turf, before picking up his second win in a mile and a sixteenth allowance on the dirt in December, his 13th start of the year. He made his 2020 debut in the Jennings Stakes in January, finishing last of six (behind winner Alwaysmining), before taking a one and one-sixteenth-mile allowance by two and a quarter lengths the following month. He made five more starts, his best showings a second and two thirds, before his fourth trip to the winner’s circle.

“It’s pretty amazing. I am so proud of this horse, you have no idea,” Rubley said. “[Goodyear] just loved this horse from the day he was born and look at how it’s paid off for him. It’s just remarkable. What a neat little horse for this man to have picked out of the field and said, ‘He’s the one.’"

His dam Terminally Pretty, by Kentucky Derby winner Giacomo, is the dam of three foals; both her starters are winners. All three foals are Maryland-bred and Maryland-sired: her 3-year-old filly Beyond Pretty is by Seville (Ger) and 2-year-old Orientated is a son of Orientate.