Karan’s Notion brings it home in the Maryland Million Sprint 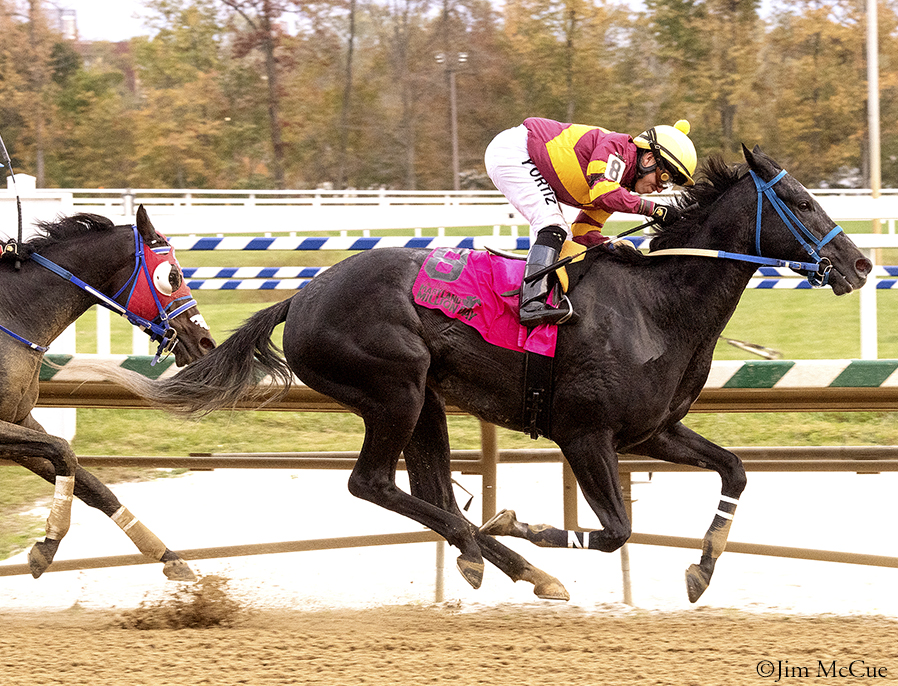 One of four sons of Great Notion in the 10-horse field, including two of the race favorites, Onemoregreattime and Lewisfield, Karan’s Notion was overlooked at 16-1. No one challenged him when Ortiz Yomar sent him to the lead, and they flew through the opening quarters in :22.49 and :45.07. As they made their way around the far turn and down the stretch, Karan’s Notion maintained his advantage, then held off 23-1 Baptize the Boy to win by a length, with 2018 winner Lewisfield finishing another length and a half back in third. Onemoregreattime was fourth. Final time for the six furlongs was 1:09.15.

“I don’t believe it’s real yet. I’ve been training 50 some years, but I’ve never had a [Maryland Million] eligible horse,” Heil said. “When he was a baby – he had these long legs, like spider legs – and we said, ‘I think he’s going to be the one.’ ”

Finishing second in his debut in June, Karan’s Notion made another attempt before breaking his maiden impressively in his third start, winning by 13 1/2 lengths in a $40,000 waiver maiden claimer while getting five and a half furlongs in 1:02.95, .75 off the track record. He made four allowance starts in August and September and finished in the top four in all of them, including a win Aug. 29. His Maryland Million victory improved his record to 3-2-1 from eight starts for earnings of $129,724.

“I never knew how fast he could run. When he won here by 13 lengths, I knew he had more in the tank,” Heil said. “I tried to get the rider to believe in him and just go with him and trust yourself.”

Karan’s Notion was Great Notion’s fourth winner of the day, which propelled the Northview sire’s record of Maryland Million wins to 17. Karan’s Notion’s winning dam Susan Karan, a daughter of Waquoit, has produced only two foals since 2012, and both are winners. She was bred back to Great Notion for 2021..