Madaket Stables, Albert Frassetto, Mark Parkinson, K-Mac Stable and Magic City Stables’ Hello Beautiful gave everyone the comeback they were hoping for as the 3-year-old filly dominated a talented field of older mares in the $100,000 Maryland Million Distaff to win by double digits Saturday, Oct. 24 at Laurel Park. 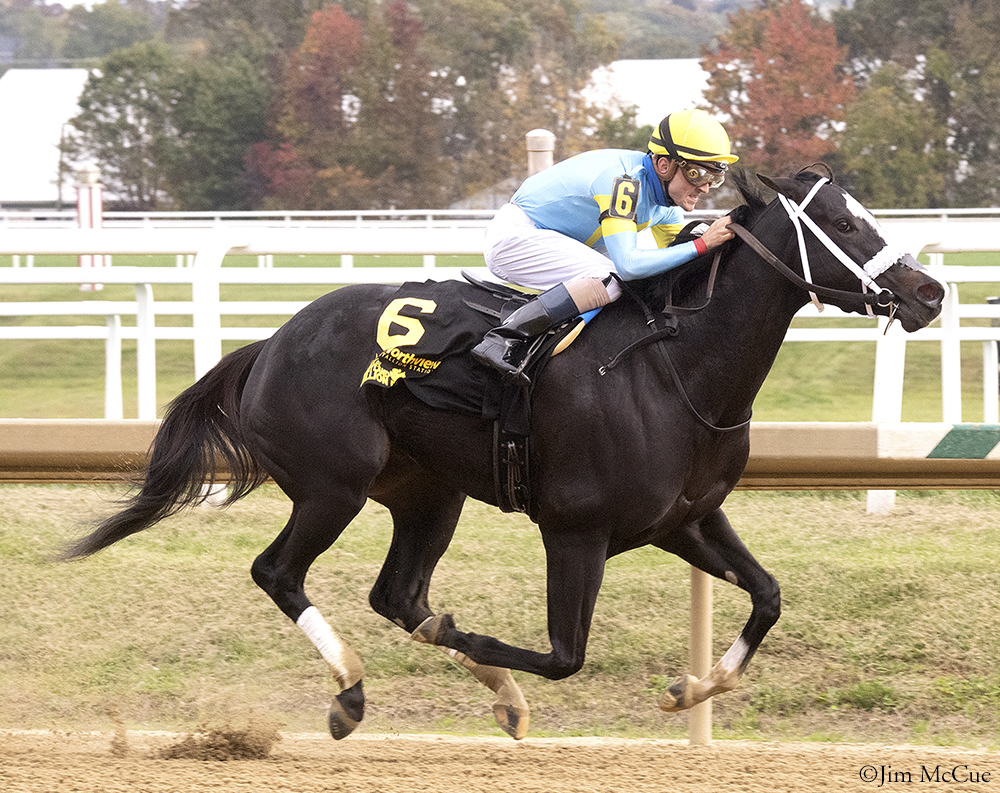 Returning to Laurel after two trips away from her home track, Hello Beautiful broke quickly to the lead as multiple stakes winner and 2017 Maryland Million Lassie winner Limited View challenged from the inside before gaining a slight lead as they hit the quarter-mile mark in :22.30. Hello Beautiful soon took command– by the half (in :45.06) she was up a length, at the top of the stretch the lead was seven. Le Weekend and Artful Splatter gave chase, but Hello Beautiful kicked it into high gear down the stretch, breaking away to win by 11 1/4 lengths over Quiet Imagination, who rallied late, with Le Weekend another length back in third.

The favorite stopped the clock at 1:21.84 for the seven furlongs.

“It’s been a tough year for us, for sure. We tried a few things and she had some bad luck. It’s really satisfying to get her home today and have Sheldon back aboard. That helps a lot,” Brittany Russell said. Her husband Sheldon Russell is the filly’s main rider in the morning and on race day. The win was the rider’s second of four on the day.

Making her 2-year-old debut in May at Pimlico, Hello Beautiful, from the first crop of Northview Stallion Station’s Golden Lad, never finished worse than third in six starts as a juvenile, capping her season with back-to-back wins in the Maryland Million Lassie and Maryland Juvenile Filly Championship Stakes.

With initial plans for her 3-year-old year impacted by Covid-19, Hello Beautiful returned in June at Laurel. Making her first attempt on turf and facing older runners she finished seventh, although beaten just over three lengths. She found redemption in a six-furlong allowance back on the dirt just a few weeks later by and eyecatching eight and a quarter lengths in 1:09.88. The filly ventured out of town in August to try her hand at the Audubon Oaks at Ellis Park, but was bothered at the start and never got on track, finishing last of 11. She made her graded stakes debut in the Prioress Stakes-G2 at Saratoga a month later, vied for the early lead and faded to sixth.

The Maryland Million Distaff Handicap was the striking dark bay’s first stakes win since December and boosted her overall record to 5-2-1 from 11 starts, with earnings of $257,110.

Bred by Hillwood Stables, Hello Beautiful was purchased by Russell as a yearling for $6,500 at the 2018 Fasig-Tipton December Mixed sale. She is the second foal, second starter and first winner for Hello Now, a daughter of the recently pensioned Tiznow who is also the dam of an unraced 2-year-old colt by Mosler named Hello Hot Rod and a yearling colt by Golden Years. After missing on a late breeding date to Hoppertunity for 2020, Hello Now was bred back to Golden Lad for 2021.

Throughout the week of Feb. 22, the Maryland Horse Breeders Association will announce the 2020 Maryland-bred Champions and Industry Award winners via social media (Facebook, Twitter and Instagram). Once they're announced, they'll be listed below.

The fourth annual Renaissance Awards, a cooperative effort between the Maryland Horse Breeders Association, Maryland Thoroughbred Horsemen’s Association and Maryland Jockey Club, will look a bit different this year as the top Maryland owner, trainer and jockey, Maryland stallion, broodmare and breeder, as well as the champion Maryland-breds of 2020 will be presented virtually this month. Special awards will be presented to Pimlico and Laurel Backstretch Employees of the Year as well as to an industry Unsung Hero.