Vivan Rall’s homebred Epic Idea remained unfazed by the step up to stakes company and longer distance as she won the $100,000 Maryland Million Ladies, for 3-year-olds and up, at Laurel Park on Saturday, Oct. 24. 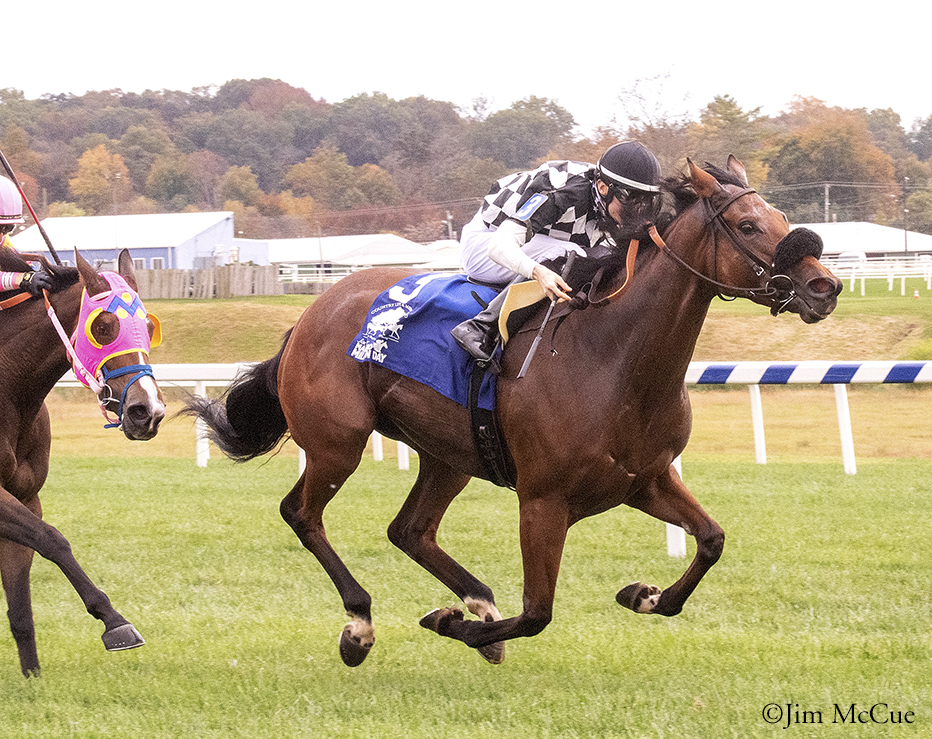 Making her fifth start as a 4-year-old, Epic Idea found her place on the lead as favorite Something Magical flanked her from the outside, running through an opening quarter-mile in :24.85 and half in :51.73. The early leaders dueled up the backstretch and around the far turn before Something Magical began to fade and Gennie Highway moved up to challenge Epic Idea around the final turn. As the group turned for home, Epic Idea increased her momentum and finished three-quarters of a length ahead of Gennie Highway despite drifting out.

Stopping the clock at 1:55.06 for one and one-eighth miles on the turf, the Ann Merryman trainee survived a claim of foul from Gennie Highway’s rider Jorge Ruiz to take home her first stakes win. She paid $13.60 to win.

“That’s pretty cool. That is amazing,” jockey Trevor McCarthy said. “Big credit to these guys, Ann and [son] Michael. I always thought she was a great sprinter. Going into it I said, ‘I guess we’ll try and nurse her for as long as we can,’ and when I slowed it up the second quarter, she turned off so nice. Even though she had a little bit of company next to her, she was going really smooth and she gave me a nice kick turning for home.”

The two-time winner sprinting on the turf successfully stretched out as she improved her record to 3-2-0 from 10 career starts, with $143,477 in earnings.

The daughter of Maryland’s leading sire Great Notion made her debut at Laurel Park last June and broke her maiden in her third start when winning a five and a half-furlong maiden special weight by a length. Epic Idea moved up to allowance company, winning once and securing two second-place finishes before making her stakes debut. The Ladies was the first race she’d contested over a mile. With her win, Great Notion continued his streak, siring at least one winner for 11 consecutive Maryland Millions. She was his first of four winners on the day.

Epic Idea is a fourth-generation homebred (all by Maryland sires) for Rall, descending from the *Mystic II mare Aunt Sheila (born in 1970) and is the first foal out of $108,089-earner Calliope. The Outflanker mare has a 2-year-old colt by Great Notion named Great Idea who has yet to start, a yearling colt by Divining Rod and has been bred to Super Ninety Nine for 2021.

Throughout the week of Feb. 22, the Maryland Horse Breeders Association will announce the 2020 Maryland-bred Champions and Industry Award winners via social media (Facebook, Twitter and Instagram). Once they're announced, they'll be listed below.

The fourth annual Renaissance Awards, a cooperative effort between the Maryland Horse Breeders Association, Maryland Thoroughbred Horsemen’s Association and Maryland Jockey Club, will look a bit different this year as the top Maryland owner, trainer and jockey, Maryland stallion, broodmare and breeder, as well as the champion Maryland-breds of 2020 will be presented virtually this month. Special awards will be presented to Pimlico and Laurel Backstretch Employees of the Year as well as to an industry Unsung Hero.