Cash is King LLC and LC Racing LLC’s Monday Morning Qb gave a resounding performance in the featured $150,000 Maryland Million Classic on Saturday, Oct. 24 at Laurel Park, as he dominated down the stretch to win by three and a quarter lengths over the favorite, Pimlico Special-G3-winning Harpers First Ride. 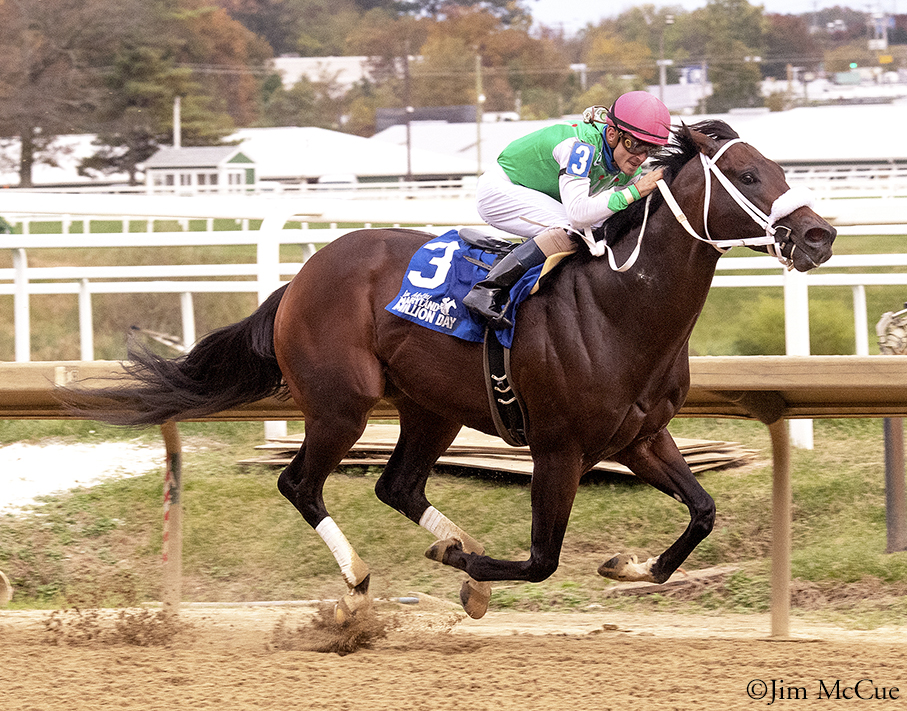 The only 3-year-old in the field of seven, including both Maryland-sired and Maryland-bred contenders, Monday Morning Qb bobbled slightly at the break but recovered quickly as he moved up to flank early leader and the previous year’s second-place finisher Prendimi from the outside. Prendimi took them through the opening quarter in :23.47, but Monday Morning Qb was pressing for the lead as they hit the half-mile mark in :46.81. The Butch Reid Jr. trainee went six furlongs in 1:10.94 and kept the momentum going turning for home, easily repulsing Harpers First Ride’s late bid. Longshot Tattooed was third. The winner paid $15.60 and completed the mile and an eighth in 1:48.13, less than a second off the track record and the fastest running of the race since it was shortened to its current distance in 2009.

“I thought there was a little more speed. For him to be in the catbird seat laying second was kind of a surprise to me,” Reid said. “I just told Sheldon [Russell] to break him sharp and wherever he was comfortable was fine with me. The horse has no problem coming from off the pace or on the lead, whatever you want to do.”

Purchased by Cash is King’s Charles Zacney for $25,000 as a yearling at the 2018 Fasig-Tipton Midlantic Eastern Fall sale, Monday Morning Qb improved his record to 3-2-0 from seven starts for earnings of $225,155 with his second career stakes win. He made his debut at Parx last October and broke his maiden in his second start, winning by two and a quarter lengths. Next out was his stakes debut in Laurel’s Heft in December, which he won by three-quarters of a length while getting the seven furlongs in 1:23.46. He became the first stakes winner for Anchor and Hope Farm’s freshman sire Imagining.

Monday Morning Qb kicked off his sophomore season with a fourth-place finish behind Max Player in his graded stakes debut, Aqueduct’s Grade 3 Withers Stakes in February. When he next appeared it was in the Federico Tesio Stakes at Laurel in September, a sensational return in which he set the pace and held off all but Happy Saver, who returned in his next start to win the Grade 1 Jockey Club Gold Cup Stakes at Belmont Park.

Just a few weeks before his Maryland Million debut, Monday Morning Qb finished 11th in the James W. Murphy Stakes at Pimlico, his first try on the turf.

Bred by Bowman and Higgins Stable and Cary Frommer, Monday Morning Qb is Imagining’s first Maryland Million winner. He became only the second 3-year-old to ever win the Classic, the other Bonus Points in 2017. Monday Morning Qb is the first foal for his dam How My Heart Works, a daughter of Not For Love whose only other foal is a Nyquist filly born this past February. She was covered by champion Arrogate in his final book this year.

How My Heart Works is one of nine winners from nine starters for her dam Formalities Aside (by Awesome Again) and is a half-sister to six-time stakes winner and Maryland-bred champion Awesome Flower and graded stakes-placed First Mondays, and a full sister to stakes winner If Not For Her.