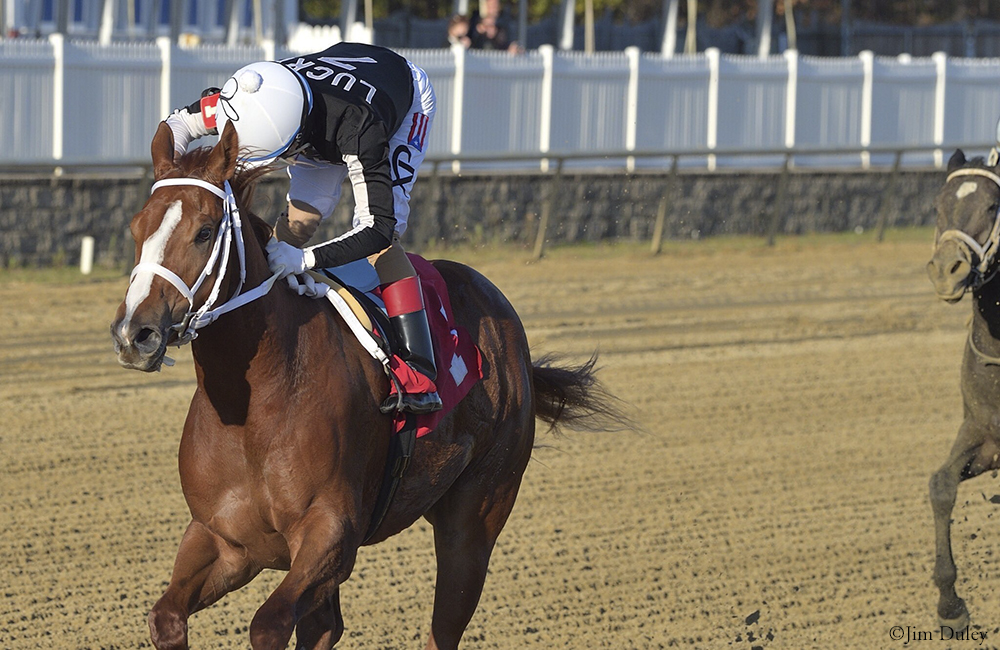 Making her third stakes start this year, the daughter of Maryland sire Street Magician, the 3-2 favorite in the field of eight, settled into third along the rail behind Be Sneaky, racing from the outside, and early leader Donnybrook Girl. As they hit the quarter-mile mark in :21.69, Street Lute made her move up the inside and took the lead as they neared the final turn, through an opening half in :44.75, and kicked away down the stretch. Final time for the six furlongs was 1:09.85.

“The instructions were to try and get a good break and see. I thought [second choice Prodigy Doll] might go and she didn’t. You definitely don’t know what they’re going to do so you have to leave it up to the jockeys,” trainer Jerry Robb said. “[Xavier Perez] let [Donnybrook Girl] go and laid right off of her and somehow he got through. It worked out perfect.”

It was Robb’s second Smart Halo win, following Lake Sebago in 2014, and Street Lute’s second stakes win from a four-start career. Winning on debut in September at Delaware Park, she followed up with a victorious stakes debut in the track’s Small Wonder, winning by five lengths as the 2-1 favorite over eventual stakes winner Plane Drunk. Street Lute was sent off as favorite next out in the Maryland Million Lassie Stakes, where she stretched out to six furlongs and finished just a neck behind winner Miss Nondescript after a hard-fought battle to the wire.

“It’s definitely a little bit of redemption. In the Maryland Million she had to chase the speed and hold off closers, and she didn’t see the horse coming or I think she might have won that race,” Robb said. “She thinks she won it, so we tell her she did.”

Bred by Dr. and Mrs. Thomas Bowman and Dr. Brooke Bowman, Street Lute was purchased by Robb as a yearling for $10,500 at last year’s Fasig-Tipton Midlantic Eastern Fall sale. She is the only starter from her dam Alottalute, an unraced daughter of Midnight Lute, who has produced four foals including 3-year-old Pappy Heist (Bourbon Courage), a yearling colt by Editorial and a full weanling sister to Street Lute born in late May.