As Galerio hit the wire one and three-quarter lengths ahead of stakes-placed Tattooed in the sixth race Saturday, Nov. 21 at Laurel Park, he secured his eighth win of the year to tie for first by number of wins on the national leaderboard. 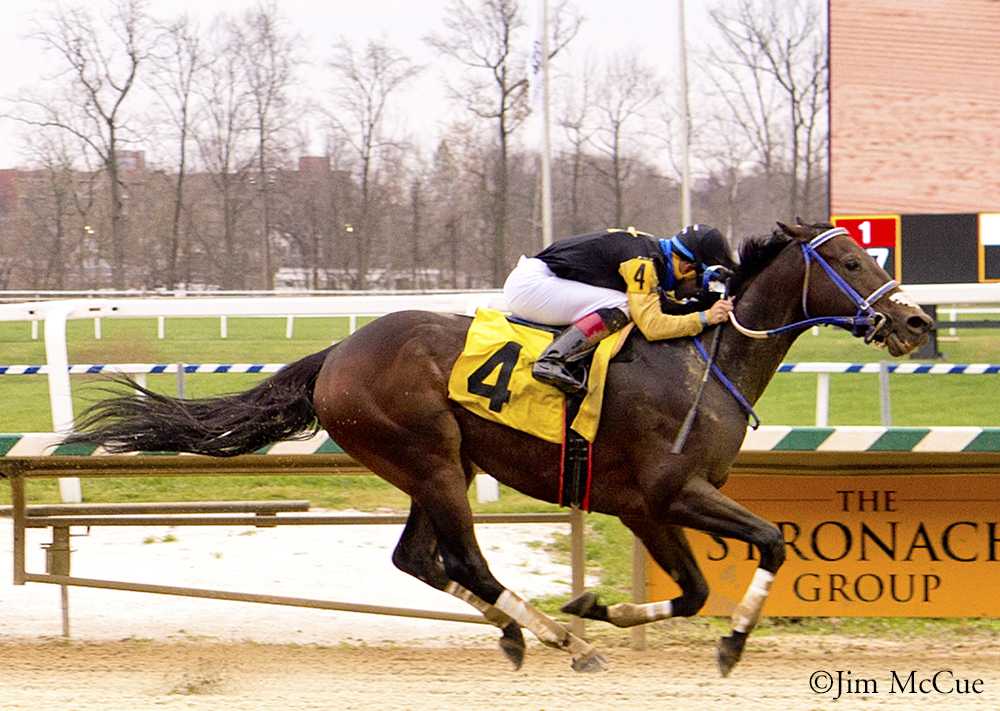 Seeking his third straight win, Galerio settled into third along the rail as early leader Passion Play took the field through early fractions of :22.91 and :46.37. Galerio moved up the inside as they headed towards the final turn, getting just ahead of Passion Play to take the lead as they hit three-quarters of a mile in 1:11.09. He burst down the stretch, easily outlasting a late run from Tattooed. Final time for the one and one-sixteenth miles was 1:42.21.

It was his final start for owner Robert D. Bone and trainer Claudio Gonzalez, as the 4-year-old gelding was claimed for $35,000 by Dale Bennett and new owner SAB Stable Inc.

Bred by Daniel Marconi, the gelded son of the late Jump Start finished third in his career debut last May at Delaware Park as a 3-year-old and went on to finish second in three of his seven starts for owner D and S Stables LLC and trainer Kevin Boniface before he was claimed by Bone and Gonzalez for $25,000 last November.

Closing out last year with a second-place finish for his new connections, Galerio returned this January to finish fifth before something clicked a month later in his 10th career start, where he broke his maiden by an impressive seven and a half lengths in a six and a half-furlong maiden special weight. Since February, the Maryland-bred has picked up seven more wins and three seconds as he’s moved up from the starter/optional claimer level and to allowance company.

His most recent win was his third consecutive victory at Laurel, following a win by a nose at a mile and a sixteenth Sept. 17, and scoring by a half-length going a mile Oct. 22. Improving his overall record to 8-8-1 from 20 career starts, Galerio has $278,083 in earnings, with $229,425 amassed just this year.

Galerio is tied for first by number of wins nationally with Kentucky-bred Combination. Just below them, eight horses are tied in second with seven wins each.

The bay gelding is the first foal from Marconi’s mare Congaree Princess, a daughter of Congaree he purchased eight years ago. The daughter of William Backer’s homebred mare Royal Reception has produced two foals, both starters, the other the 2-year-old filly Bella Bettina, who has placed this year. The mare is in foal to Golden Lad.

Galerio was named after his breeder’s late father Galerio John Marconi, who fought in the South Pacific in World War II.