Hard work pays off for Whereshetoldmetogo in the Frank Y. Whiteley Stakes

Following suit behind stablemate Hello Beautiful, winner of the Safely Kept Stakes a race prior, Whereshetoldmetogo officially recorded his first stakes win of the year in the $100,000 Frank Y. Whiteley, dueling with favorite Laki to win by a nose Saturday, Nov. 28 at Laurel Park. 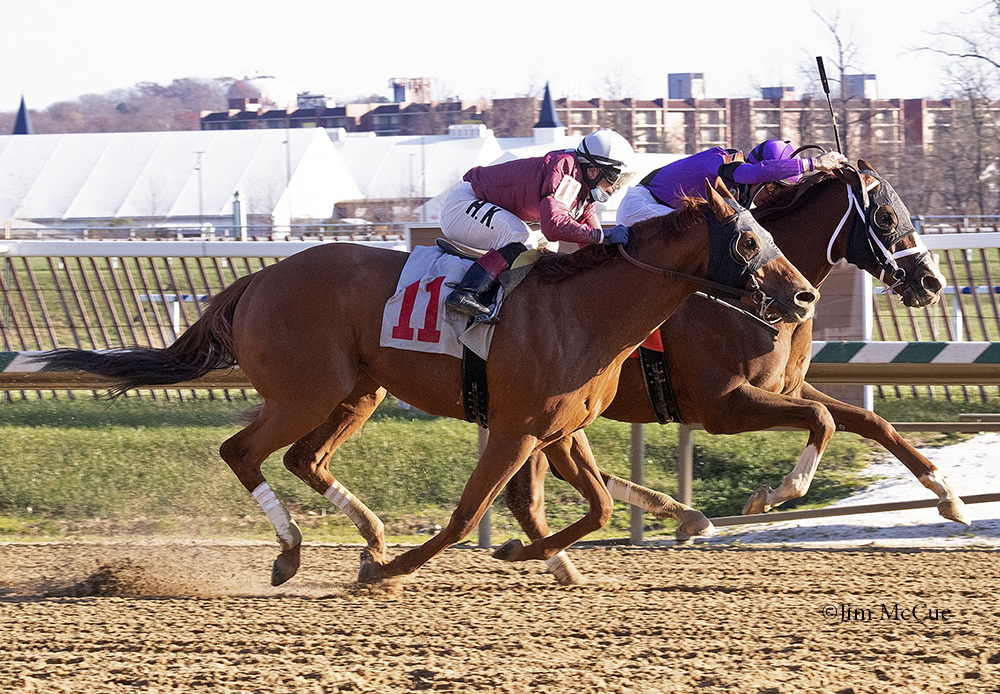 Whereshetoldmetogo bided time mid-pack as early leaders Arthur’s Hope and Zenden battled through the opening quarter-mile in a swift :21.59. As the pacesetters made their way around the final turn, getting the half in :44.42, Whereshetoldmetogo found room between the leading pair to the inside and challengers Day the Music Died and Laki to the outside and burst through. The Brittany Russell trainee then fought off a late run by Laki to hit the wire first. It was another six and a half lengths back to Bybee in third.

“We had a good trip. He came up the inside,” Russell said. “I know we had a little issue there and I was hoping we didn’t get DQ’d but it looked like it wasn’t as big of a thing as maybe we originally thought. I felt like our horse was full of run and he’s tough and he’s game and he kept his head down, so I was confident.”

In his prior start, Whereshetoldmetogo crossed the wire first in Delaware Park’s New Castle Stakes in September but was disqualified to second. The hard-knocking Maryland-bred has started in 17 stakes during his 23-start career, winning five and placing in five others. He has improved his overall record to 8-5-2 with earnings nearing the $500,000 mark at $481,291.

Originally campaigned by Black Cloud Racing (Mark Esposito) and trained by Anthony Pecoraro, Whereshetoldmetogo won on debut as a 2-year-old in June 2017 by two and a half lengths at Delaware Park. In his third career start, he made his stakes debut in the Sapling Stakes at Monmouth, finishing sixth, before returning victoriously with his first stakes win in the 2017 First State Dash at Delaware.

Throughout the rest of his 2-year-old season and continuing as a 3-year-old, Whereshetoldmetogo started in eight stakes and won three, including the American Fabius at Gulfstream, and the Concern and Star de Naskra at Laurel. Prior to his graded stakes debut in the 2018 Gallant Bob Stakes-G3 at Parx, Black Cloud sold a majority interest of the Maryland-bred to a group led by Madaket Stables, including Ten Strike Racing and Michael E. Kisber. Whereshetoldmetogo went on to finish second to Firenze Fire, but made headlines as he savagely bit the winner on the neck as they neared the wire.

Last year, the flashy chestnut gelding won an allowance at Churchill Downs and also finished third and fifth, respectively, in the Thanksgiving Classic Stakes and Bensalem Stakes. After a third-place finish in the Iowa Sprint Stakes to kick off his 5-year-old season, Whereshetoldmetogo was moved from trainer Brad Cox to Russell, and later finished fourth in the Polynesian Stakes in September before his start in the New Castle.

Bred by David H. Wade, Whereshetoldmetogo was purchased by Black Cloud as a yearling for $7,000 at the 2016 Fasig-Tipton Midlantic Eastern Fall sale.

His dam Undisputed Legend, bred and owned by Wade, is a daughter of Domestic Dispute. She has five winners from as many starters, including Whereshetoldmetogo’s full brother Castlewood Terrace, a 4-year-old gelding who finished third in the 2018 Prairie Meadows Juvenile Stakes.

Undisputed Legend has a 3-year-old son of Golden Lad named Golden Gallant, and a 2-year-old filly by Uncle Lino, neither who have started. Her current yearling is a Great Notion colt named Rominski. The mare did not have a foal in 2020 and was bred to Mendelssohn for 2021.