MCA Racing Stable’s Harpers First Ride, winner of the Pimlico Special-G3 in October, lived up to his favoritism in the $100,000 Richard W. Small Stakes as he swept around the turn and down the stretch to win easily by three lengths Saturday, Nov. 28 at Laurel Park. 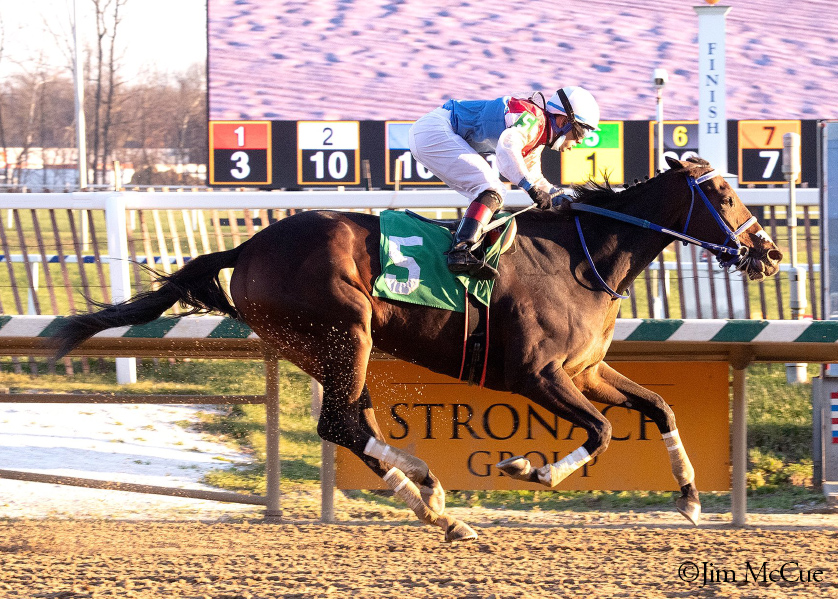 Breaking amongst a competitive 10-horse field, Harpers First Ride settled mid-pack as multiple graded stakes-placed second-choice Bal Harbour was challenged for the lead by Wait For It through an opening quarter-mile in :23.14 and half in :46.24. As Maryland-breds Cordmaker (third in the Pimlico Special) and Top Line Growth moved in on the leading pair, Harpers First Ride rolled up the outside around the final turn. By the top of the stretch he was on top by 4 and held his daylight lead to the wire. Cordmaker got the place, with Name Changer edging Top Line Growth to show.

The Richard W. Small was 4-year-old Harpers First Ride’s fifth stakes start, and third win, in the past five months. After finishing fifth in the Monmouth Cup-G3, his stakes debut, in July, the Paynter gelding notched a second-place finish in a $45,000 allowance at Parx before taking the Deputed Testamony in September, his first stakes win. Kicking clear of Cordmaker, he won by three and a quarter lengths as he finished the mile and a sixteenth miles in 1:42.86.

His second start in graded stakes company was a victorious one, as the Claudio Gonzalez trainee took the Pimlico Special a month later. Going head-to-head against heavy favorite Owendale, Harpers First Ride prevailed by two lengths as he tried one and three-sixteenth miles for the first time. He finished in 1:54.97 and paid $13 to win.

Just a few weeks later, the Maryland-bred drew into the Maryland Million Classic as the favorite, but was outrun in the final furlong by Monday Morning Qb and finished three and a quarter lengths back in second.

“He’s a special horse,” jockey Angel Cruz said. “He gave me my biggest win of the year and he just gave me another one. Those horses are special. They mean a lot, and when you get on them, it means more.”

Making his first three starts for breeder/owner Sagamore Farm and trainer Gary Hartlage, Harpers First Ride finished fourth on debut and followed up with a 10th-place finish before breaking his maiden by two and three-quarter lengths at Churchill Downs last September. He was claimed out of that race for $30,000 by his current connections and has since picked up five allowance wins, two last year and three this year, before his start in the Monmouth Cup-G3.

His dam Polyester, a daughter of Tiz Wonderful, produced three winners for Sagamore before she was consigned to the 2018 Keeneland January Horses of All Ages sale and purchased for $90,000, in foal to Quality Road, by Kathryn Martin. The mare has a yearling colt by Practical Joke and produced a colt by Bolt d’Oro this year.