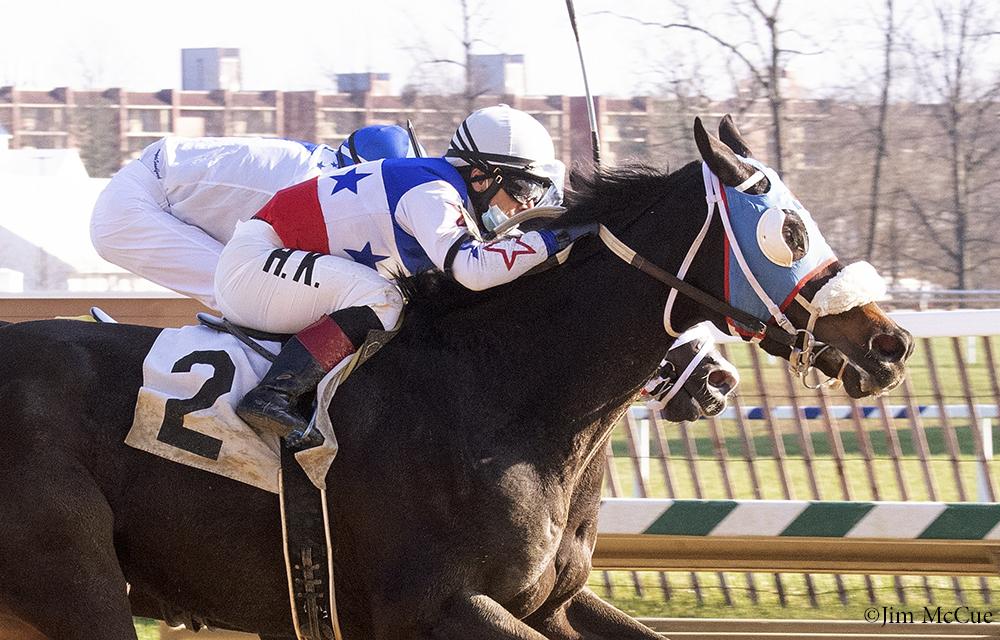 Making his second stakes start of the year, Air Token broke quickly to the inside and trailed in fourth as Francatelli led the nine-horse field through early fractions of :22.73 and :45.28. As they rounded the final turn, the Jose Corrales trainee worked his way up between Francatelli and Dreams Untold as he pursued the leader down the stretch and took over in the final yards. Finishing the seven furlongs in 1:22.29, Air Token won by a neck.

“We just sat behind the speed. Mr. Corrales told me to not rush him,” jockey Horacio Karamanos said. “He broke out of the gate really nice. I saw [Francatelli] was the favorite. At the top of the stretch he was moving outside clear and nicely. He gave me a really nice kick and fought to the wire. He ran big today. I was confident all the way around.”

Winning at nearly 17-1, the gelded son of Golden Lad notched his second straight win, following a strong run in an allowance going a mile Nov. 7, originally scheduled for the turf. Facing older runners in each of his 10 prior starts this year, Air Token has run on turf and dirt, and has hit the board on both. After making one start in May as a 2-year-old, where he finished third, he returned just over a year later and got his first win in August, scoring by two lengths going six furlongs on the dirt, and was claimed by Corrales for $10,000. A few weeks later, he made his turf debut, going one and one-sixteenth miles, where he finished just three-quarters of a length behind winner The Cotswold Wasp (GB).

Though his next start had been switched from one and one-sixteenth miles on the turf to a mile on the dirt, Air Token continued to show his versatility as he managed a neck win over favorite Galatians Sept. 11. After getting two more starts under his belt, the gelding made his stakes debut in the Maryland Million Turf Starter Handicap, where he finished one and one-quarter lengths behind winner Beltway Bob going one and one-eighth miles Oct. 24.

Bred by Carol Ann Kaye, Air Token was consigned as a yearling to the 2018 Fasig-Tipton Midlantic Eastern Fall sale and sold for $3,500 to Lancy Racing. Air Token is the fourth foal from his dam Saint Dinorah, a unraced daughter of St Averil bred by Kaye in partnership with Barbara Smith.

The producer of three winners from three starters, Saint Dinorah has been bred to Bullsbay for 2021.