Lucky 7 Stables’ Street Lute continued to show off her talent as she stole away with the $100,000 Maryland Juvenile Filly Championship Stakes, for Maryland-bred/Maryland-sired 2-year-old fillies, Saturday, Dec. 5 at Laurel Park. 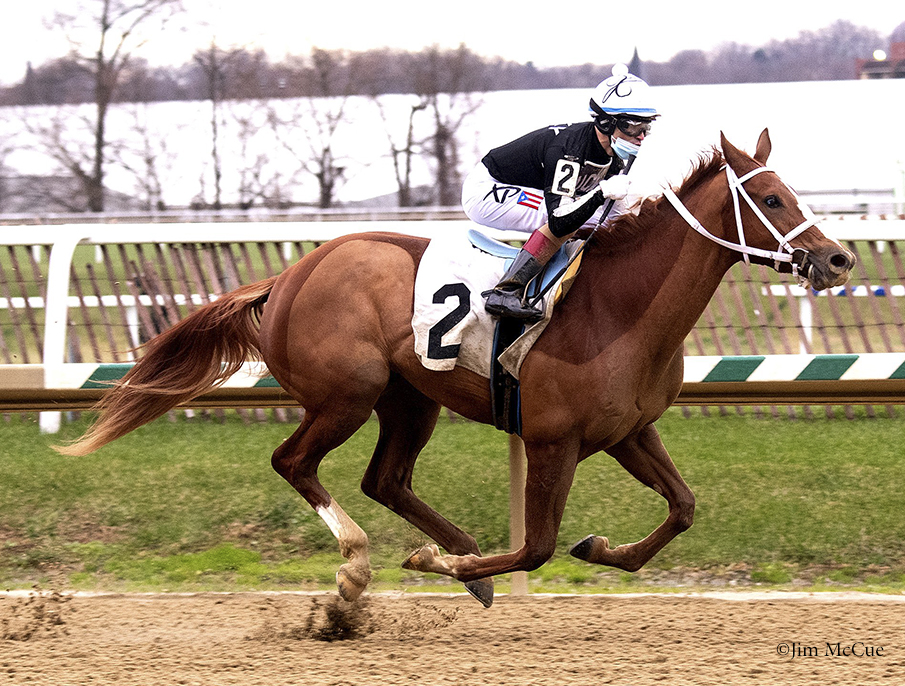 Coming off of a win in the Smart Halo Stakes last month, Street Lute settled into fourth to the inside of Maryland Million Lassie winner Miss Nondescript as early leader Liam’s Missy hit the opening quarter-mile in :22.70. As Street Lute moved up through a half in :46.47, she found her opening between Liam’s Missy and Trip to Freedom at the top of the stretch and burst ahead, taking over the lead from Liam’s Missy as she went on the win by one and three-quarter lengths over late runner Juror Number Four, with Maxine’s Tap Room in third.

“Everything worked perfectly. [Trainer] Jerry [Robb] was on the phone with me. He told me he wasn’t going to be able to make it,” jockey Xavier Perez said. “The race before the horse went to the lead and kept going and he asked me to go the lead if we can without using her. That was the plan and then the other two horses went to the lead. I know my filly can settle and she did. We had just a perfect trip.”

It was the third stakes win from four attempts made by Street Lute this year, starting off with her stakes debut in the Small Wonder at Delaware Park Sept. 26. Just a few weeks after breaking her maiden on debut by a length at the Delaware track, the daughter of Street Magician won by an easy five lengths in the $100,000 five and a half-furlong stakes.

The filly returned a month later to contest the Maryland Million Lassie Stakes, making her first start at her home track, Laurel Park. Though the newly minted stakes winner fought hard going six furlongs for the first time, she was runner-up by a neck to fellow Maryland-bred Miss Nondescript in a photo finish. In a run for redemption, Street Lute followed up with a two and three-quarter-length win in the Smart Halo Nov. 14.

Bred by Dr. and Mrs. Thomas Bowman and Dr. Brooke Bowman, Street Lute was purchased as a yearling by Robb for $10,500 at last year’s Fasig-Tipton Midlantic Eastern Fall sale. She is the only winning starter from Alottalute, a daughter of Midnight Lute, who has produced four foals.

Alottalute has a yearling colt by Editorial and produced a filly by Street Magician, a full-sister to Street Lute, this May.